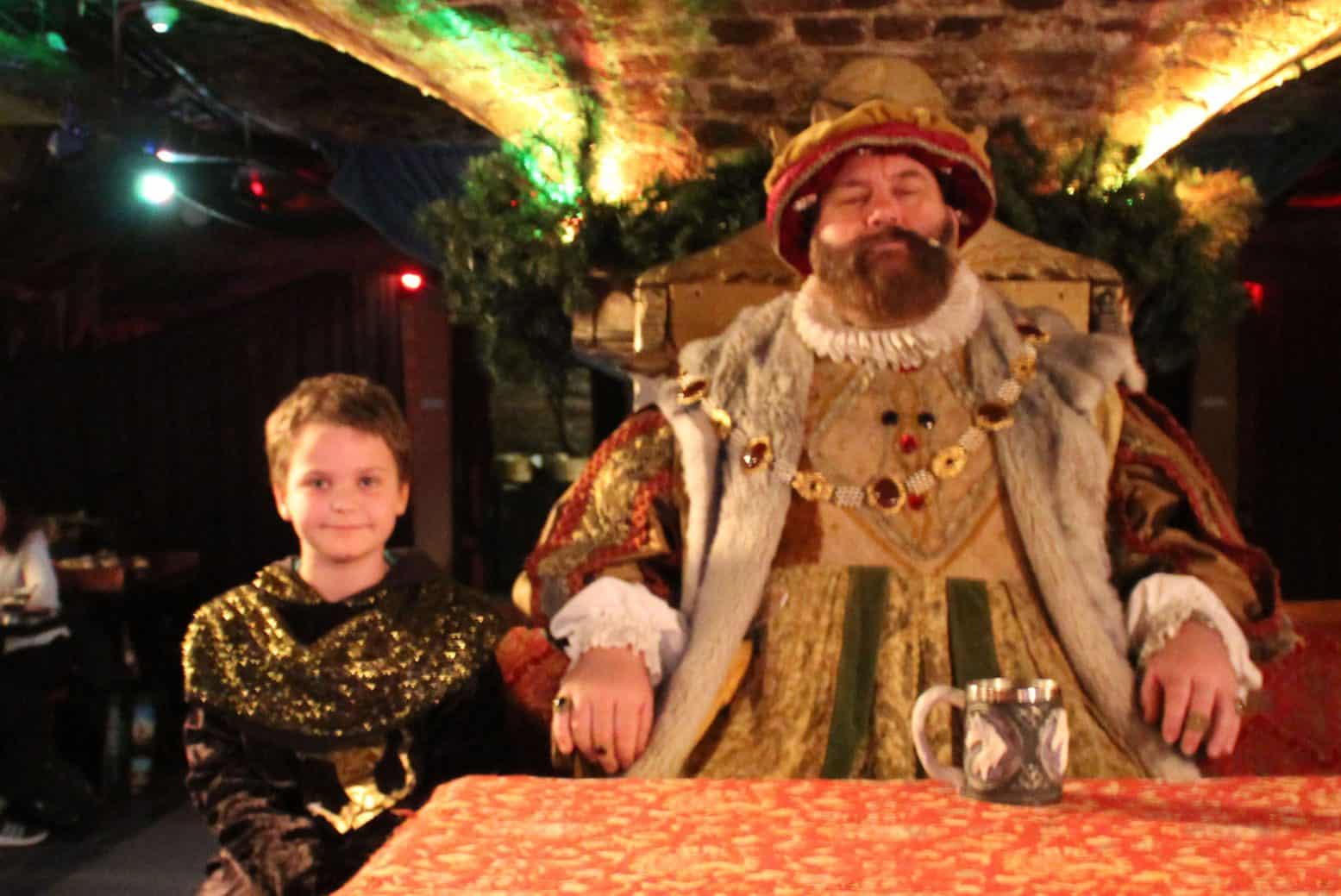 As you approach the doorway of the Medieval Banquet in London you will see two shiny suits of armour standing guard – the whole place is wonderfully themed.  Then, you will descend into the beautifully lit cellars and be greeted by the costumed players before being shown to your table ready for your evening of carousing and wassailing! 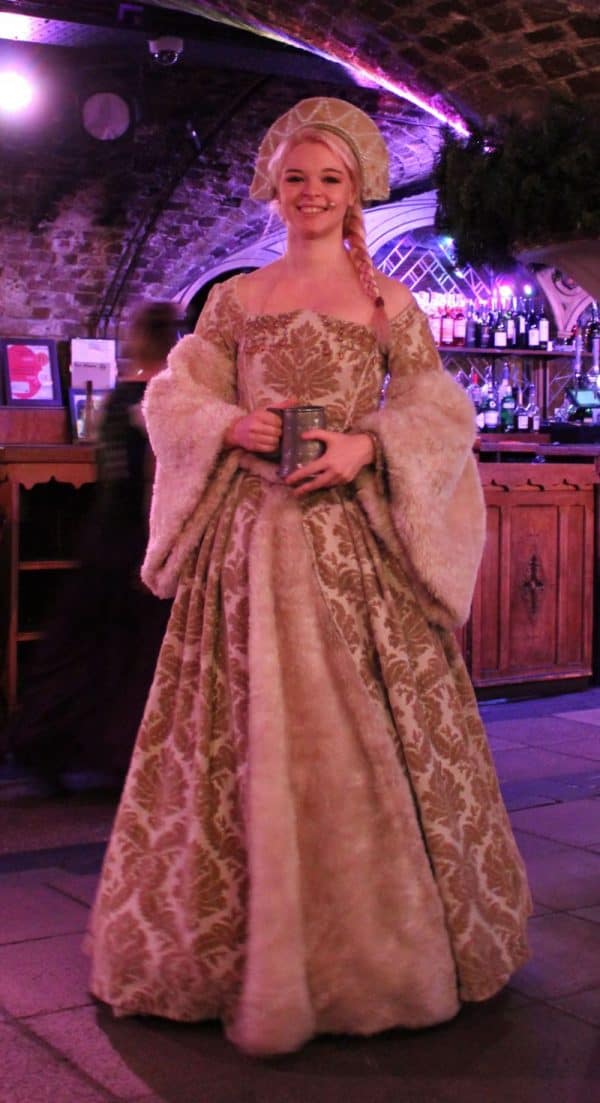 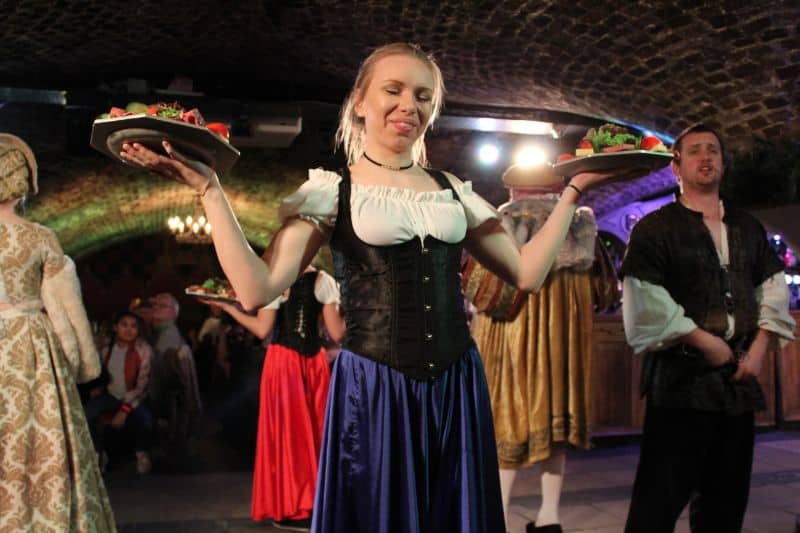 We had hired costumes, so after putting down our things on the table, we made our way over to the racks of Medieval costumes. Earlier that day I had mentioned to Miss H that we would be dressing up in the evening. Clearly I timed this information badly as it was greeted with a face. You know the one, the one that means ‘no chance whatsoever’. On a different day the idea of dressing up might have been the best thing ever, but on this day? No. The stars were not in my favour.  Costume hire is £10 per person, I’d recommend hiring adult costumes and taking the kids already in costume if you have something handy (or perhaps buy one ahead of time that they get to keep).

Here was our king for the evening: 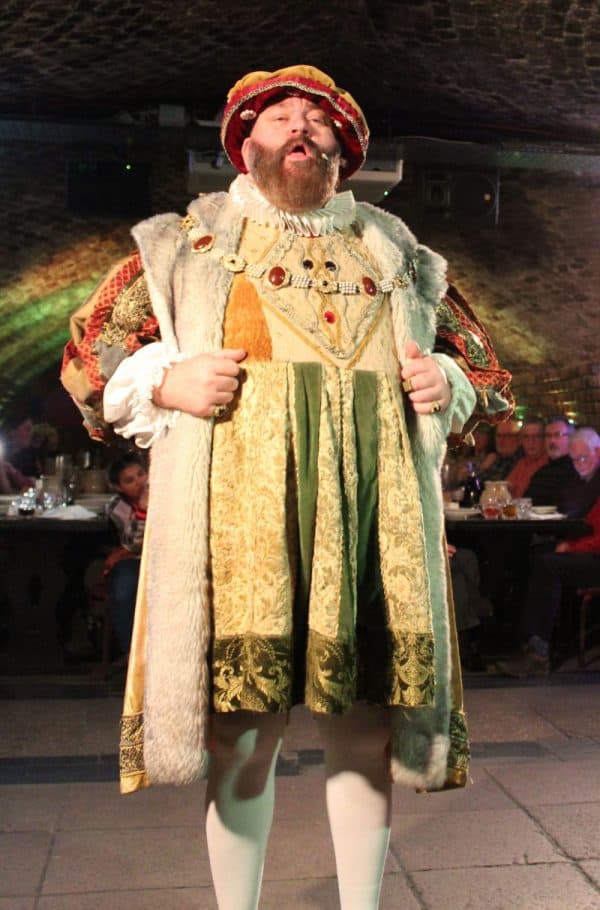 I lucked out with Master T though who surprised me and wanted to dress up. He looked great in his costume!  The players wandered around and chatted with the guests whilst keeping in character. A wandering minstrel (or knight?) approached our table with some chain mail and invited the children to try it on. Master T feigned indifference but was keen to have a go. Here is the result! 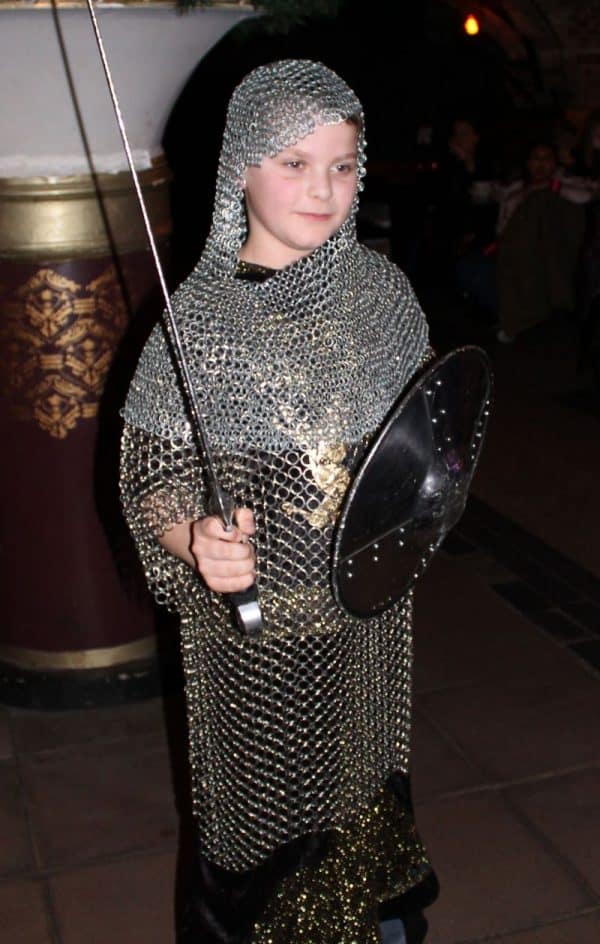 Miss H got lots of attention too whilst unintentionally terrifying the players and wenches with her toy hedgehog wrapped in a napkin (that’s just the way she rolls…!)  I think in the dark he may have looked more ratty than hedgehog! 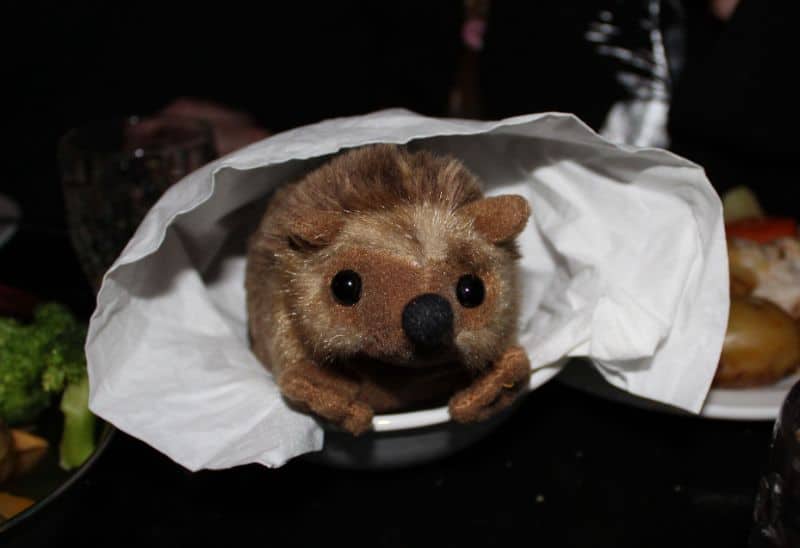 Which brings me on to mention that the servers are referred to as wenches. If you need anything during the banquet (more wine, beer or food) you only need to bang your fist on the table and shout “More ale, wench!!”.

Appreciation of the players, be it from song, juggling or acrobatics is also expressed in a similar way. You bang on your tables and roar your approval. I thought Master T would love this, and I was right! 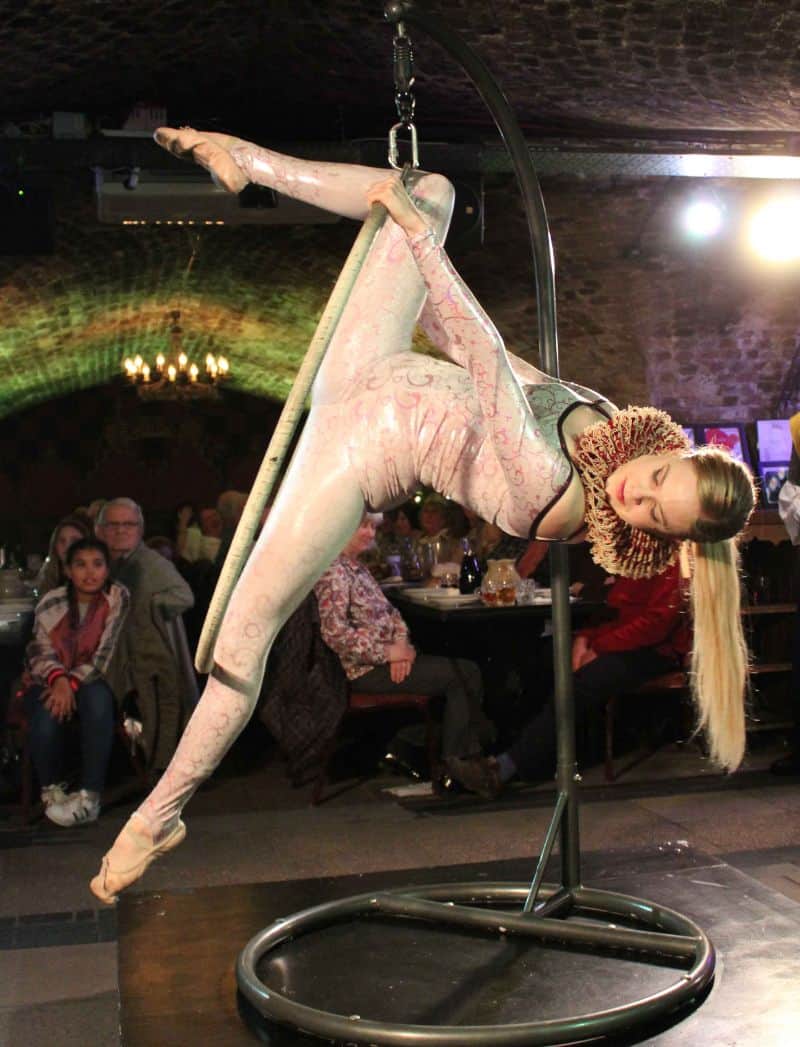 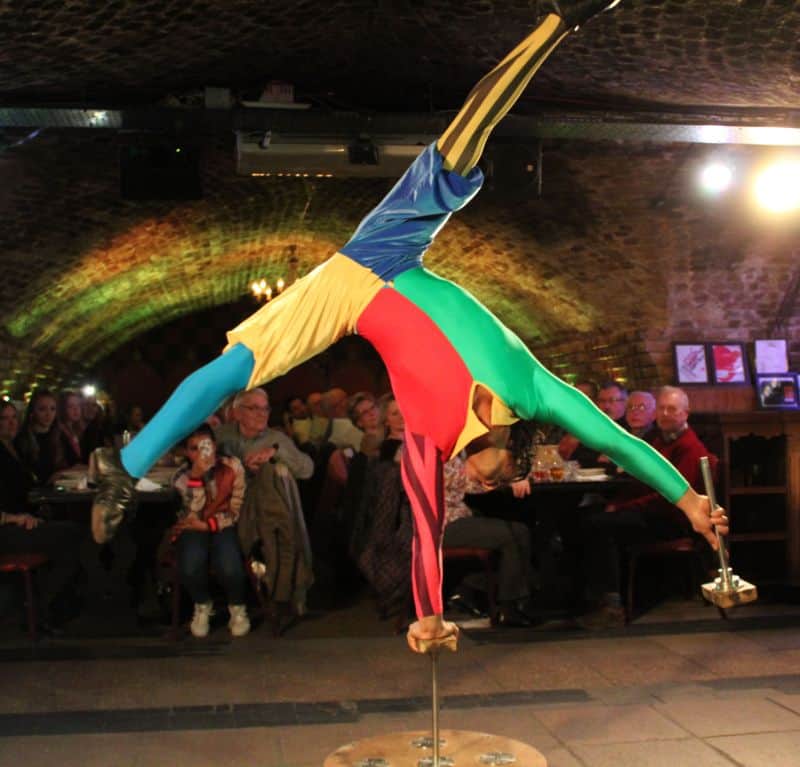 All of the Food and Drink is Included

All of the food and drink is included in the ticket price. The banquet is four courses, soup, served with big cakes of bread, then cold meats, cheese, salad and pate. After this, they bring huge cauldrons of roasted chicken, tureens of vegetables and platters of chips. The final course was a large apple and cinnamon pie, served with cream. You won’t go home hungry!

The vegetable soup in a huge tureen (I have a better picture of the soup, but I liked this one of Miss H!) 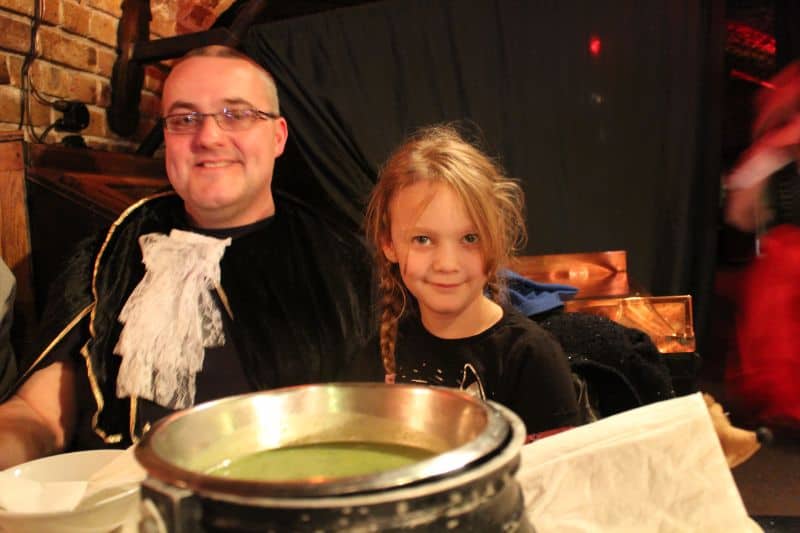 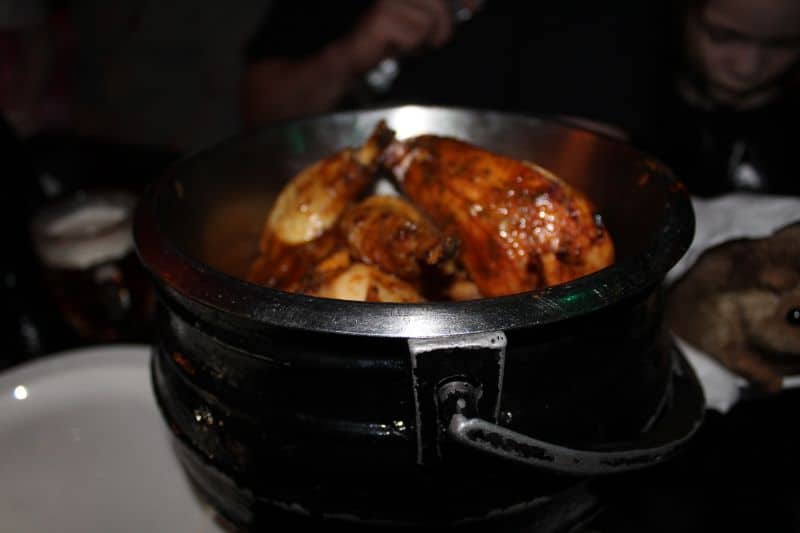 My photo of the apple pie does not do it justice – it was much nicer than it looks here! 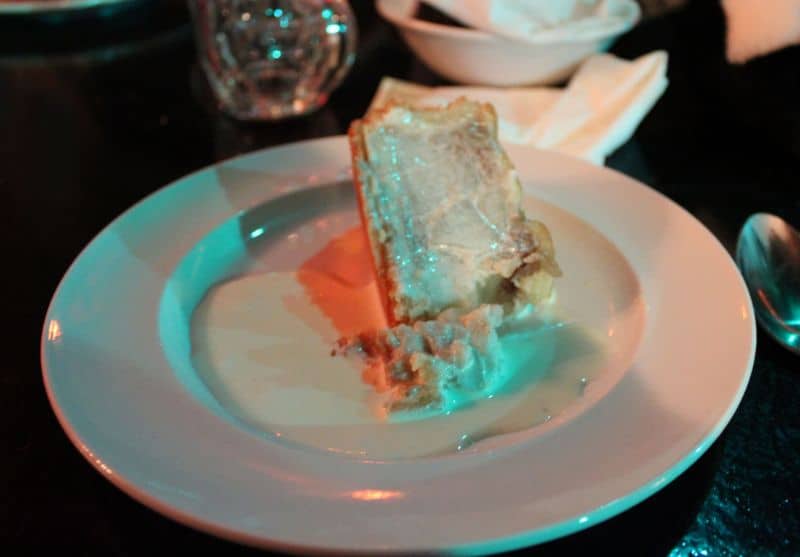 As well as the food, flagons of ale, carafes of red wine and jugs of juice were brought for the kids.  In between courses the players entertained us thoroughly. Much banging on tables was performed!

The finale involved a knight assigned to your table, who then battled the other table’s knights in a rowdy sword battle. I am proud to say that our knight was the final victor!  Go Kensington! 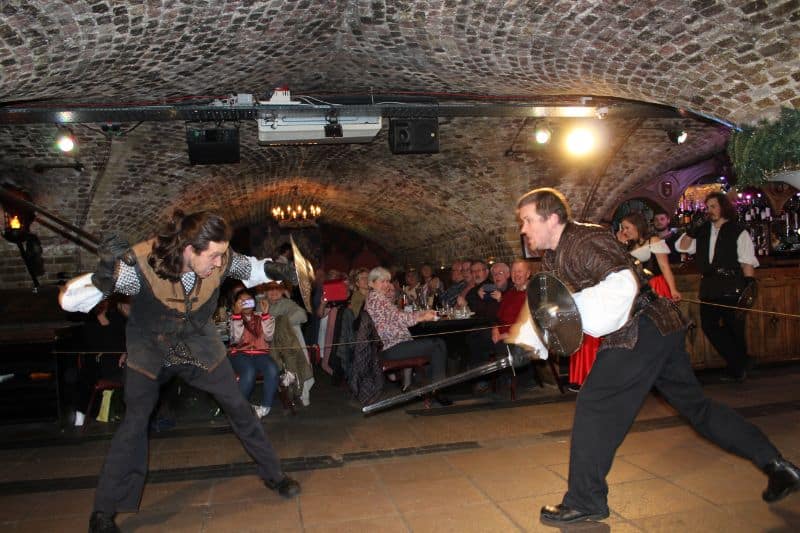 The Medieval Banquet was a great fun night and one the kids will remember for a long time.

Prices for the Medieval Banquet in London start at £50 per adult and £30 per child but they do have group offers on their website as well as a family ticket.  Costume hire is £10 per person.  We visited on a Sunday evening when an earlier showtime of 6pm has been introduced to appeal more to families with children.

Many thanks to the Medieval Banquet for inviting us to attend and review.

Not far from London, you will find Guildford in Surrey.  Here is a great round up of Things to do in Guildford.