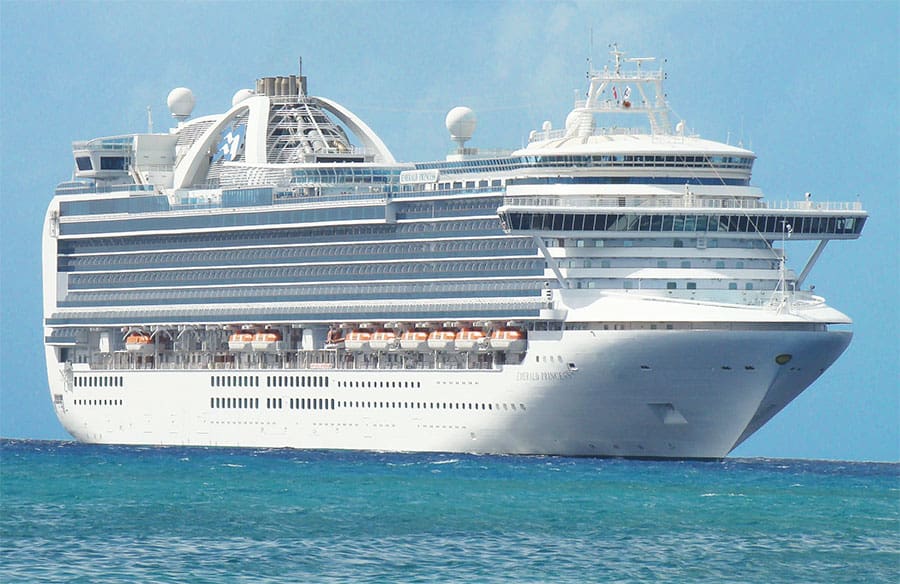 Emerald Princess Cruises – Ever fancied a cruise but ruled it out because you have kids? Think again! Now, more than ever, the cruise industry is becoming increasingly child friendly and family oriented.  Also have a look at our review of Royal Caribbean’s Independence of the Seas and this great review of MSC Bellissima.

A few weeks ago we took our two (then aged 6 and 8) on the Emerald Princess. We sailed from Southampton to France, Guernsey and Spain and it was just so easy! We chose to park at the cruise terminal, we pulled up right next to the ship, unloaded our bags and then someone came along and valet parked our car for us. (Sometimes you can get free parking as part of the package but otherwise need to pay like you would at an airport).

From where we parked our car and left our bags it was a two minute stroll into the cruise terminal. We were quickly checked in and allowed on board. In all it took less than half an hour. Once on board your holiday begins! So much easier than airports, flights and transfers! It really is a massive bonus especially if you have babies or toddlers.

Once on board we went straight to our cabin. We’d paid for an outside cabin, but were lucky enough to be upgraded to a balcony cabin at no extra cost. I will explain the cruise cabin system for those who haven’t been before. There are different grades of cabins, the very cheapest is the inside cabin. As you may suspect this cabin does not have a window. Then there is an outside cabin with a porthole or even a bigger ‘picture’ window. The next one up us the balcony cabin (the clue is in the name there!) The most expensive and best cabins are the suites, which can come with a separate living area, balconies and bigger bathrooms. Within all categories there are tiers too, so you could have a regular balcony cabin or a premium balcony cabin for example. 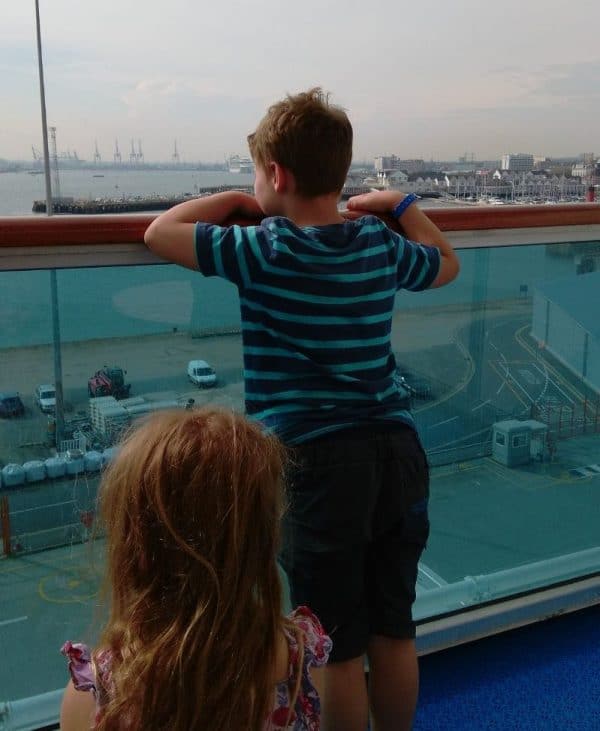 But anyway, I digress. What I imagine you are most interested in are the facilities for children, and how that makes your holiday better 😃. The big thing on board for children are the complimentary Princess kids clubs. We have never had a holiday where there were kids clubs before so this was quite a novelty. We are also a bit anxious about leaving them with people we don’t know, but it was very professional and felt very safe.

Miss H joined the ‘Princess Pelicans’ aimed at children aged 3-7. Master T, being a little older joined ‘Shockwaves’ for ages 8-12. They also have a teen club ‘Remix’, for 12-17 year olds. I preregistered the children to their clubs online before we left home and when we arrived in our room each had a welcome pack waiting. There was an itinerary for each club detailing the times they were open (from 9am till 10pm, with paid babysitting optional until 1am!) and what was happening and when.

Both clubs had lots of arts and craft activities going on which suited my two really well. Every day they brought new things home that they had made from T-shirt art to jewellery. They also did movies, sports challenges and ‘kids tea’ where they got to eat in the buffet with their new friends while the grown-ups went to dinner.

You almost didn’t have to see the little tykes if you didn’t want to! We like spending our holidays together as a family (most of the time!!) So we picked and chose when they would go depending on the activities offered. Master T would have been there round the clock if we had let him!

The other place we spent most of our time was in the pools. There is a Spa pool, an adult’s only pool and two main pools on the Lido deck where most of the families congregated. Above one of the main pools is a massive movie screen. Movies and concert footage were played during the day and on an evening. In the evening, blankets, popcorn and cookies were provided to make you cosy as you watched. Each family pool had two hot tubs as well as a large outdoor shower.

Up on the Lido deck you can also find the pizza and ice cream bar, as well as a hot dog and burger bar. The pizza was fabulous, freshly made in front of you. Enormous slices too, not that it mattered as all the food (barring the speciality restaurants) is included in the cost of your cruise.

While I am on the subject of food, a huge favourite with my two was the International Cafe. Situated in the vast atrium they served cake as well as savouries. Everything was displayed in a pristine glass cabinet, and all the children had to do was wander up and ask (politely!) for whatever they wanted! As you can imagine, we visited a LOT. The servers knew the kids names and cake preferences by about day two and made a huge fuss of them whenever they saw them. The kids felt like rock stars (cake munching rock stars, but still!!).

This was a theme throughout the ship. All the staff made a real effort to interact with the children and make them feel welcome.   The buffet restaurant was great for the children as they could try lots of different things and be more independent of us. It was casual too and quite relaxed. We also ate in the main dining room several times. It was a different menu each night but the children could also choose from a kids menu if they wanted.

The Emerald Princess has a giant theatre with different shows every night. The shows were usually on twice a night so we went for the earlier performance. The shows are fairly short at around 35 minutes which was about right for them (they were not children’s shows, but had enough to entertain them). 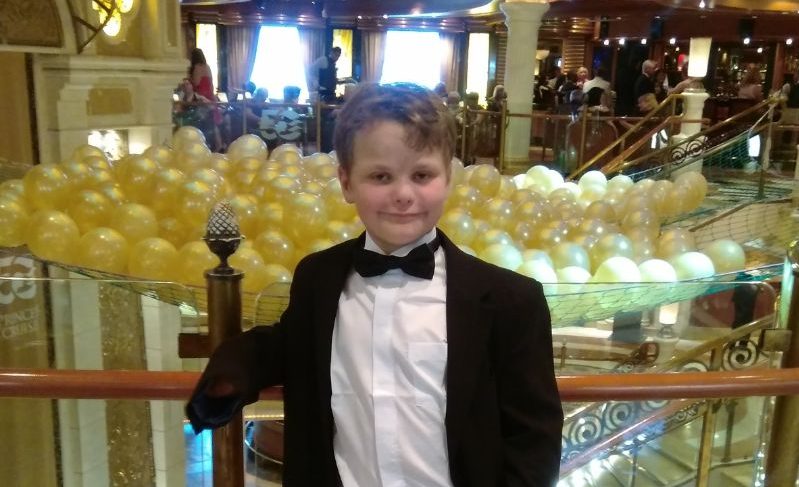 Around the ship there were photographers and you could pose in front of a backdrop. These were particularly prevalent on formal nights (of which there were two on our seven night sailing). We did not intend to buy photos but ended up buying a package of ten as they were such nice ones of the children in their posh togs! 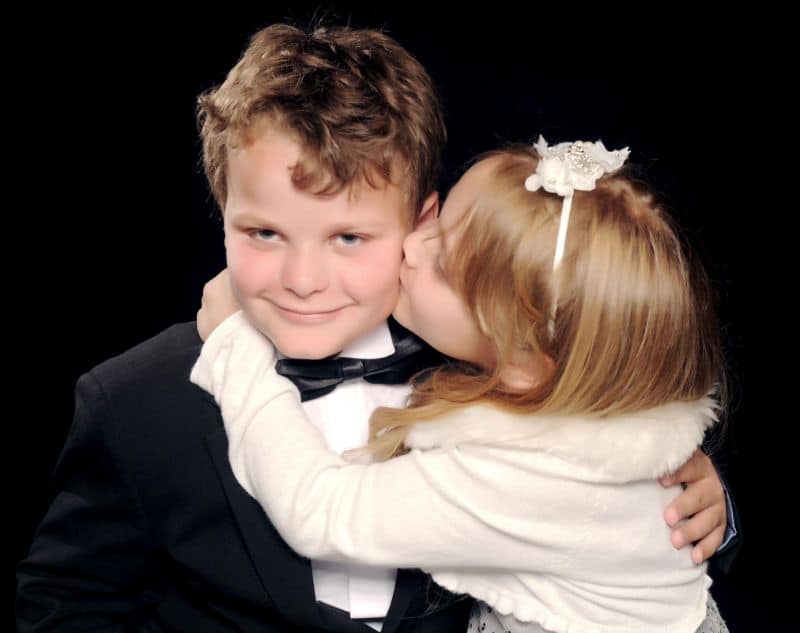 For us, a feeling of comfort and safety is really important on holiday. All around the Lido deck is a huge glass wall (I know it sounds daft, but I was worried about them falling overboard!). It would be nigh on impossible for them to do so though. The only place where they could have fallen from would be our balcony. However because the balconies are staggered they would have fallen into the balcony below (which would have been bad enough obviously!!). But the balcony came to my chest so was almost taller than my two anyway.  The below photo is Miss H in front of our cabin balcony.

Don’t rule it out because you think it might be too expensive. Have a look around there are some really good deals to be had. Especially when you consider that all your food (and fab food at that!) is included.

We sailed on the Emerald Princess with Princess Cruises The itinerary took in both France and Spain.

But also look at Disney (amazing but not cheap) and Royal Caribbean (amazing and cheaper than Disney!).

Other things to consider when choosing your cruise line.

Pin me for later