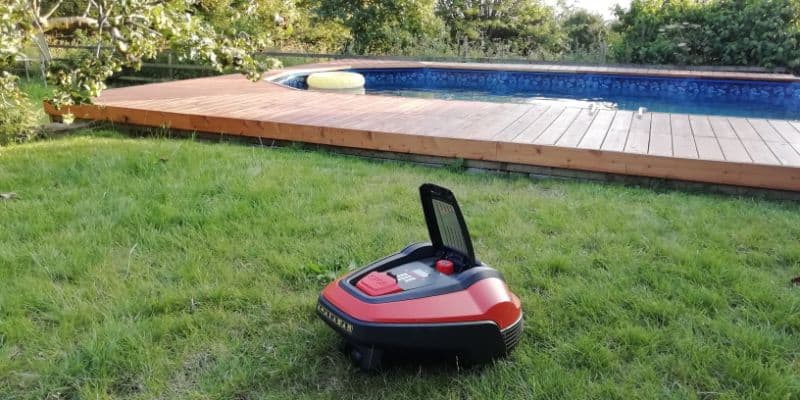 We were recently sent the Flymo 1200R Robotic lawnmower to review.  My husband has taken ownership of it and has written quite a long and rambly review below, but as I am more concise, I’ll give you the highlights first!  In a nutshell it cuts the lawn for you without you having to do anything!  There is a bit of initial setup in that you have to run a guide wire around your garden to encompass the area you want to mow.  My advice is to cut the path of the wire quite low first as then you can get it as close to the ground as possible.

Once the circuit is set up you are ready to cut!  You can set the robotic lawnmower to cut at times to suit.  In between cuts it will return itself to its docking station to recharge so there is minimal effort from you.  It tends to cut for about an hour and then charge for about an hour and will continue to do this for as long as you’d like it to.  The key is little and often as then the grass cuttings are tiny and just mulch back into your lawn unnoticed – so no hulking big bags of cuttings into the compost bin!  We’ve made a video review and a bit of a ‘how to tutorial’ though it’s all fairly intuitive.

Dude!  That’s his name and I’m not changing my mind.  So, he is named, does anyone care why?  Probably not but I shall furnish you with my reasoning regardless, he’s like a little turtle, I’m thinking Finding Nemo here, Google is your friend if you’ve been living in a cave for the last 10 years.

Anyhow, we recently took delivery of little Dude, otherwise known as a Flymo 1200 R robotic mower  to review.  Quite timely really, as our long suffering ride on mower is struggling and has been at the dangerous stage of its life for some time.  We also have a battery powered mower but, this requires me actually using it in order for the grass to become shorter.  So, a little dude who does the mowing for me sounded like a perfect idea.

I actually read the instructions for once, this left me jolly confused so was clearly a mistake.  No reflection on the instructions, it’s just there’s a lot to take in.  Fear not though, it’s not that bad really.  The key bit to read is planning the initial setup of the boundary wire, the many settings can be fine tuned later.  Yes, you heard correctly, boundary wire, this is to tell him where he is allowed to cut.  There are various examples of garden/lawn layouts to give you some guidance.  After a bit of pondering, I set up two distinct areas, the main lawn and a smaller lawn next to our swimming pool.  He was supposed to just be for the pool lawn as the main lawn is larger than the recommended maximum, but, you know, I thought it would be worth a go, sorry Flymo……. 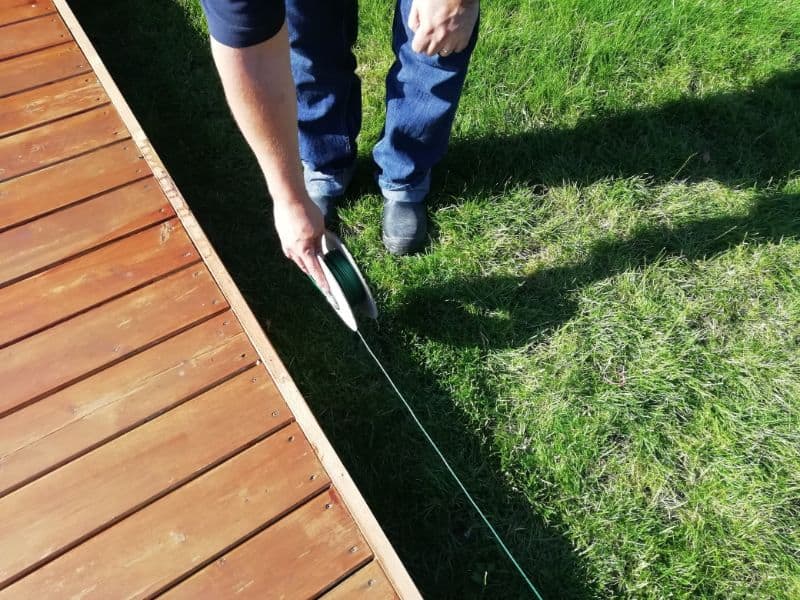 You get 150m of boundary wire and 200 pegs included, so off I went pegging, following instructions about how far from obstacles the wire should be.  Ours was generally straightforward, just needing to avoid a section around some pine trees where there are a load of exposed roots and a few old tree stumps.  Quite tedious if I’m honest but it should only need doing once if you do it well.  I say that, as evidently I didn’t use enough pegs in sections and Dude chopped my boundary wire on more than one occasion, oops!  There are a couple of spare easy to use couplers in the box for making repairs for any oops moments.  Fortunately, he did stop as soon as he chopped it so finding the fault was easy.  The wire forms an induction loop and he will only cut inside it, and indeed he will only cut if the charging station is turned on.  I mention this, as thicky here spent a good 20 minutes trying to work out why he had stopped working! 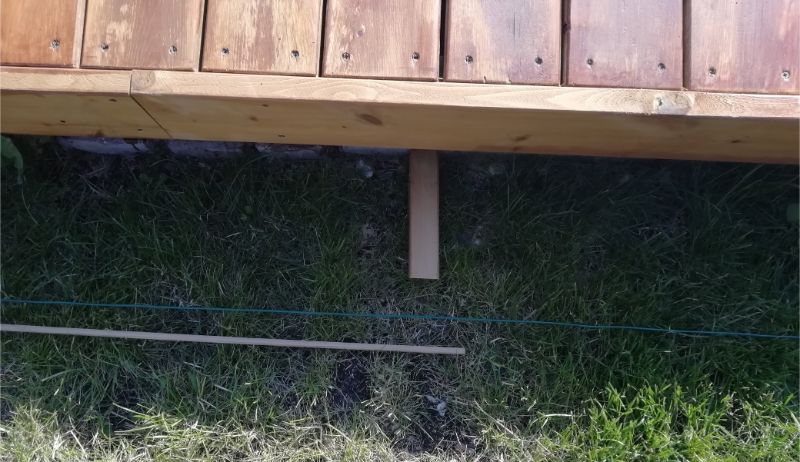 Speaking of the charging station, it’s supplied with a really decent amount of mains cable, 10m, which makes a nice change.  This made it easy to find a convenient spot for it in the garden.  This is his base and where he returns himself to when he’s in need of charging.

How does The Flymo 1200R robotic mower cut?

I should say to start off with that the theory behind all of these robotic mowers is that they mow little and often.  They trim just a few mm each time they mow.  There are 3 very small but sharp blades (spares are supplied) tasked with the job.  They are free to rotate, so I guess if they hit a hard obstacle, rather than snapping off, they spin round, safe to chop again. 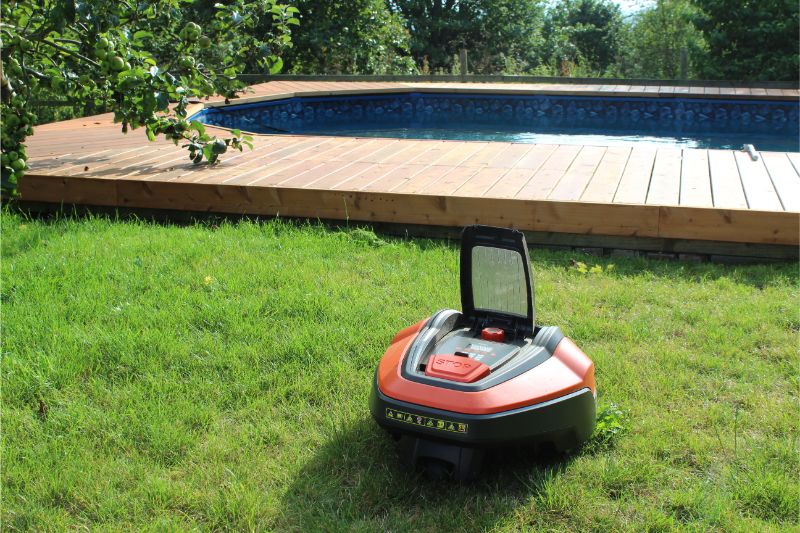 Are the cuttings collected?

The cuttings are then left behind as mulch for the lawn, no grassbox to empty here.  I’m intrigued how this works for our lawn in the long term, as it is supposed to help the overall condition of the lawn by feeding it.  I’ve always collected the clippings and this more than fills our brown (garden) bin, leaving me with builders’ bags full of clippings that I gradually get rid of during the winter.  Because the lawn is cut little and often there is never any obvious clippings on the lawn. 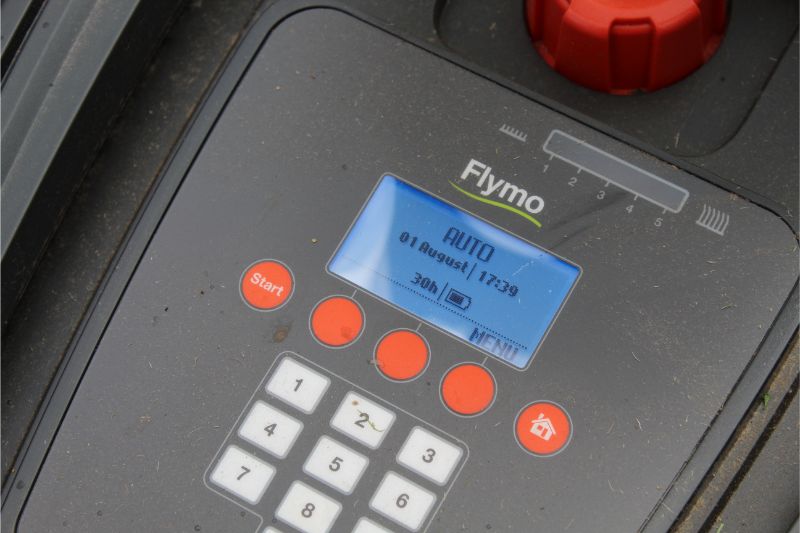 First Test in the Secondary Area

Our first test was to be on an area of lawn next to the pool, around 50-60m2.  I set this up such that I had to manually place him here and start him off.  Largely because there is a narrow gate to get in this area, and also small children are very prone to abandoning all manner of clothing and toys here which need to be moved before mowed.  He can be set off in this area and will just keep cutting until he runs out of battery.  Upon inspection in the morning it was looking quite promising.  Charged up manually after this and set out on a 2nd go, after this the lawn was done.  Even though the grass was fairly long before, there were very few visible clippings after.

Mowing a Large Lawn on a Slope

To start life off on our main lawn (around 800m2 and all on a slope) the poor little fella had to get our lawn to a more sensible length.  I did consider actually following the instructions about mowing with a conventional mower first.  This was promptly discounted in favour of trying the new toy out with a proper challenge……. 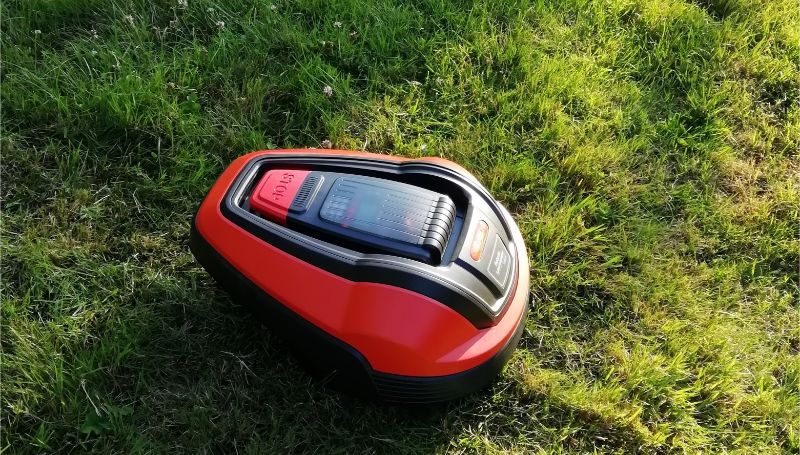 He was promptly turned on, set to the maximum cutting height and set to AUTO, off he went.  Now, I must confess to initially being quite sceptical as he drove along struggling to cut a path barely 20cm wide or thereabouts.  I watched progress for half an hour or so as seemingly random paths were cut backwards and forwards across our lawn, which in numerous places was taller than him.  Hmm, feeling a bit non plussed so far, I thought it was time for me to disappear in the workshop for the day to do some work!  I emerged about 8 hours later and was rather pleasantly surprised.  Whilst the lawn was far from complete it was very much better than last time I had seen it, even if it did look like some very geometric crop circles had appeared.  As the lawn was so long to start off with it was very apparent what had and hadn’t been cut.  I would guestimate about half-cut, you may snigger if you so please.

His efforts continued during the week, averaging around 10 hours work a day.  I say work, he will cut for around an hour on one charge, followed by returning to base to charge for an hour.  So, around 5 hours cutting per day.

By the end of the second day, we were left with numerous clumps not cut, say 10%

By the end of the third day, there were probably only 4 or 5 very small tufts missed.

After the fourth, there really wasn’t any discernible part that hadn’t been trimmed neatly. 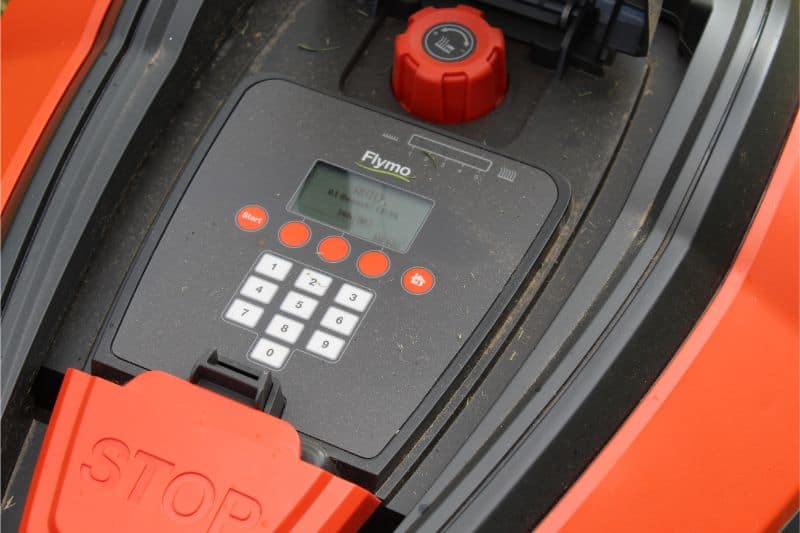 The cutting schedule is completely customisable to suit your size lawn or lifestyle.  I think I will set aside 4 days cutting on the main lawn, one for the pool lawn and a weekend rest.  To be quite honest, it’s that quiet you could have it cut overnight if you were so inclined.  I half expected it to be making a right noisy racket, but unless you’re following it round, nothing!

Do I recommend the Flymo 1200R Robotic Lawnmower?

Should you get one?  Absolutely, I love my lawn neatly cut but don’t have the time.  If all I have left to do is strimming the edges and mowing a small area around the tricky tree roots, then I stand a fighting chance.  Plus, not permanently filling the brown bin with grass should free it for other garden work.

The only problem I have encountered so far is he is supposed to be time saving, but I am wasting loads of time sat watching the grass get cut as it’s very satisfying! 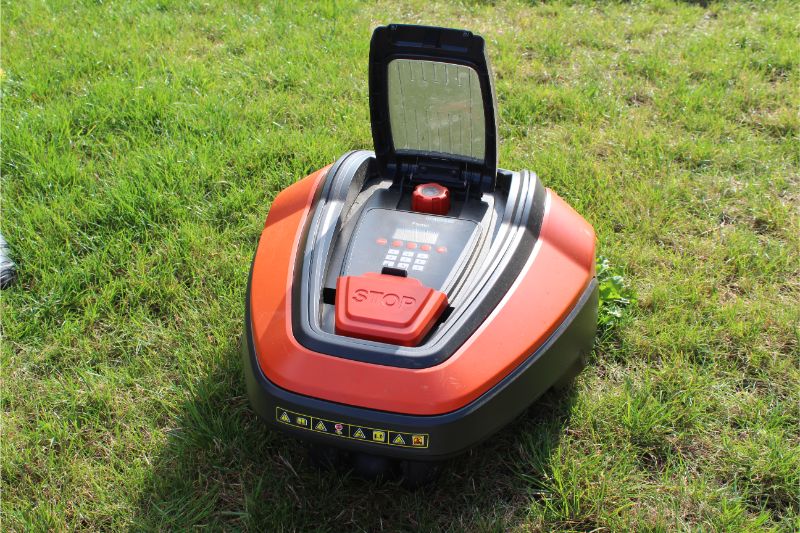 We were sent the Flymo 1200R to review.  All the opinions expressed are our own.