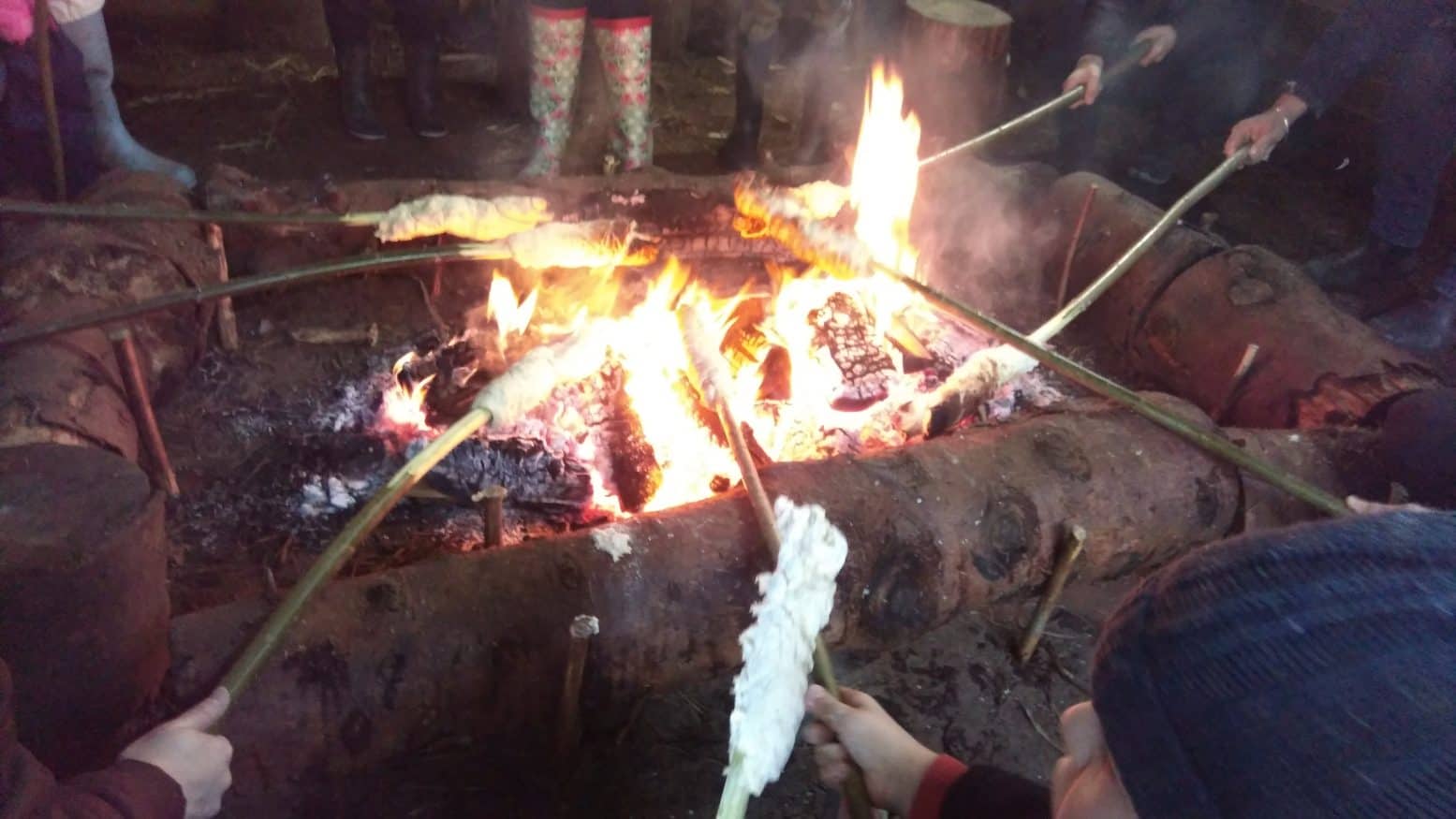 We first came across the Woodland Adventure Company several years ago when we were invited to a birthday party hosted by them. Adam was great with the kids and it was a fabulous mix of magic (tiny bells on a hidden string tinkling throughout the forest) to popcorn making and fire lighting. More recently we have attended parties where we made swords from sticks and launched startlingly powerful rockets.  Bushcraft for kids of all ages.

This Christmas a friend suggested we go along to a ‘Christmas Bake-Off’ session. Never one to turn down an invite to go somewhere, we dutifully donned hats and gloves and made our way into the forest. We were incredibly lucky with the weather, it was a bracingly cold day with a clear blue sky.

A fabulous fire roared away in the festively decorated wooden lodge. The kids had a good run-around in the forest clearing before we started. Life felt good.

Then Adam gathered the children together, introduced himself and told them all what we were going to do – bake on the open fire!

Baking Over and Open Fire

The first activity was making bread. To begin with the children were given a safety glove and a peeler and set to work whittling a stick with which to use to bake our bread. Once the stick was bare of bark we set to making dough. This, as you can imagine, was a gloriously messy business of four and water but eventually we have two lumps of dough between us to wind around our sticks.

Then came the baking. All was going well as I crouched aside the fire pit toasting first one child’s and then the other’s bread-on-a-stick (you do it Mummy, the smoke gets in my eyes….). Everything is going well until Master T’s bread drops into the fire. (Fortunately this happened when he was holding it so as bad as it was, it wasn’t directly Mummy’s fault!). Toasting was then abandoned as I tried to coax Master T back to the fire. In the end Miss H and I ate raw warm dough (though it actually wasn’t that bad, would be nice to try fully cooked!).

The second baking activity was chocolate orange cake baked in the hollowed out skin of an orange. Adam had already made the mix, so each child dutifully lined up for their oranges to be filled.

Then we popped the top on and wrapped in foil before Adam put them in the embers of the fire.

They needed to be baked for thirty minutes so we then moved on to the next activity which was the old camping favourite – s’mores – but with a twist! Each child had a waffle cone and could fill their cones with layers of chocolate and marshmallow (deeply jealous at this point). When the cones were filled, they were also wrapped in foil and put alongside the cakes to be baked.

When the cones and the cakes came out of the fire, all the kids were delighted with their culinary skills (except Master T ‘I don’t like orange’ and ‘my cone is burnt’. It was one of those days…! I got to eat the cake though, so it wasn’t all bad.

Our baking finale was a combination of toasting marshmallows on sticks (universally approved of) and popcorn cooked over the open flame (again a winner with the hard to please).

All in all we had a lovely day, different from the norm with its own special festive charm. I’d recommend you try Adam’s bushcraft sessions or a party. Have a look at his website for what he is doing next and where.  He does all sorts of themed sessions aimed at different age ranges.

3 thoughts on “Outdoor Baking with the Woodland Adventure Company”