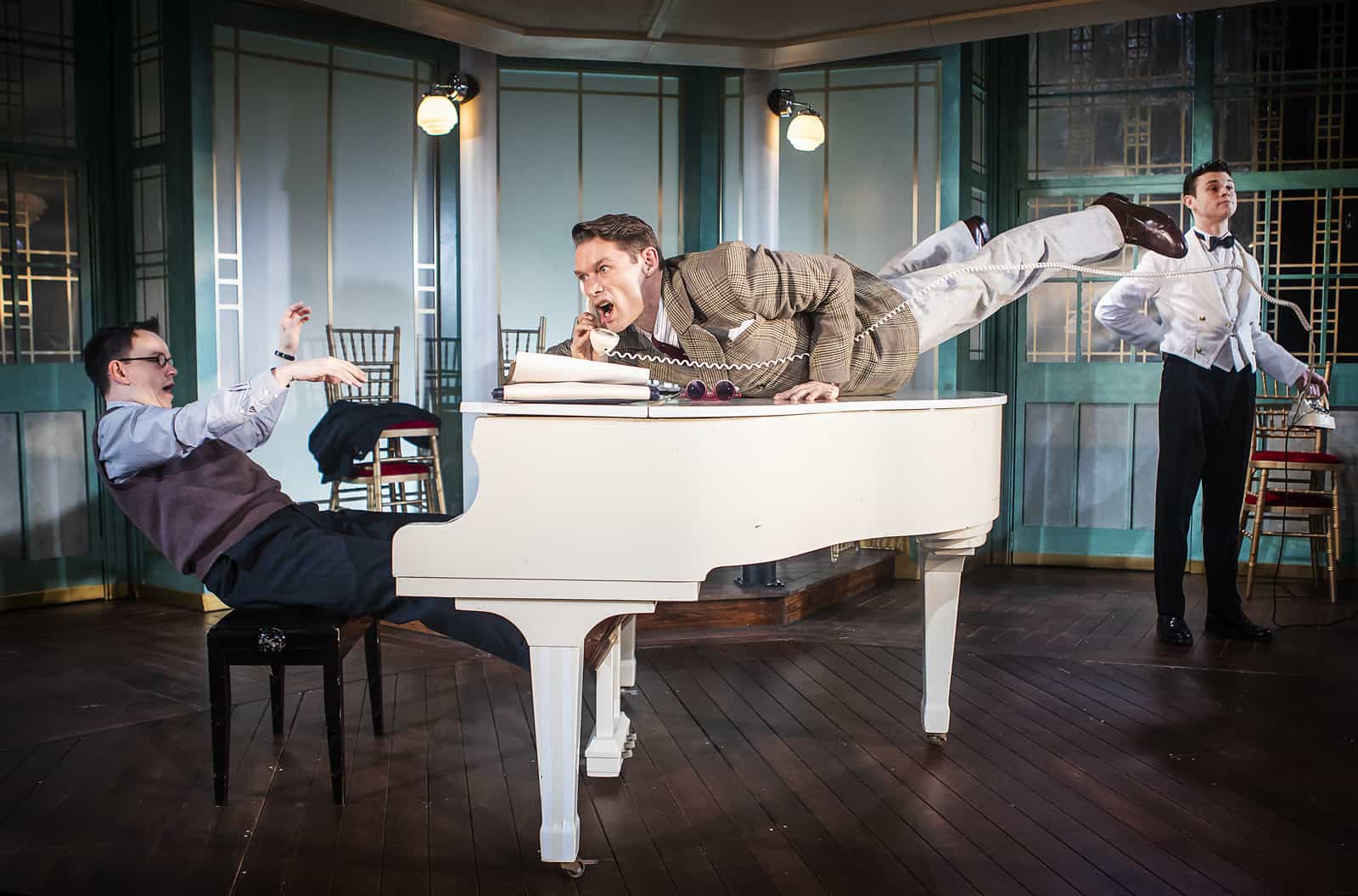 Next week we are embarking on a mini cruise to Bruges, what better way to prepare than hopping aboard the SS Italian Castle at Leeds Grand Theatre for a peek at Rough Crossing?

Having not seen Rough Crossing before but being intrigued by the synopsis, we really wanted to like this show. The six-handed cast included John Partridge (who we have a soft spot for after his ‘journey’ on Celebrity MasterChef last year, and whose talents were IMHO criminally wasted in Eastenders) and Matthew Cottle (Mr. Tangerine Candyfloss himself from Game On – the epitome of the risqué sitcom from our youth).

We were sucked in by it being ‘freely adapted’ from Ferenc Molnar’s Jatek a Kastelyban (Play at the Castle) and were wowed by both the initial impression of the set design, and its subsequent adaptability to suit the scene.

For this adaptation there were a number of innovative touches – the breaking of the 4th wall at various points, the self-referentially identified need for monologues and synopses, and the oh-so-meta play-within-a-play-within-a-play set-up.

All Aboard the SS Italian Castle…

Messrs Partridge and Cottle did admirable jobs with their parts as playwrights Turai and Gal, frantically trying to complete the ending (and beginning, and possibly the middle) of their latest production on a four day cross-Atlantic trip. The former chewed the scenery with aplomb as the Machiavellian schemer manipulating his actors for the good of his play/ wallet, and the latter intentionally almost blended into the background (constantly with food in hand) as his steadying partner.

The real star of the show, and maybe it wasn’t a surprise when reading his previous credits and upcoming theatre roles, was Charlie Stemp as Dvornichek/ Murphy, the ship steward. His was a character to really warm to. He effectively had the best lines (or delivered them in such a way to make them seem the best) and his physical comedic gifts were a joy to behold – with a running gag about a glass of cognac never tiring throughout the play. 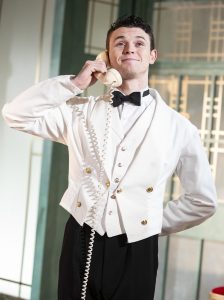 The problem for us was that the other three characters – Natasha (the muse), Ivor (the ageing Lothario) and Adam (the young prodigy suffering with nerves) – were not sympathetic characters and, although their love triangle was a key part of the play, it was hard to be too engaged in where they landed when all was said and done.

Elements of the play were designed to be confusing due to the premise described above, but a lot of it had the feeling of an idea conceived after a few drinks that was hilarious at the time, but didn’t translate well when viewed through the prism of sober daylight. There were funny moments, chuckles rather than belly laughs and more often than not including ‘Murphy’, but the pauses for laughter didn’t feel fully warranted, and there was an awkward moment after the delivery of the first scene setting monologue, where a round of applause was probably expected but none was provided.

One scene, playing on Adam’s speech impediment (a self-diagnosed issue with his ‘starter motor’) felt like a less well delivered, and much harder to follow, version of the Mastermind sketch by the Two Ronnies. 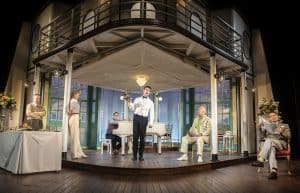 At times it was hard to tell what genre the play was trying to sit within. It never got to full-on farce, and didn’t pretend to be a drama, but neither was it as clever as it wanted to be around word-play. Most disconcerting to us was that the Natasha character felt like she was channelling Yvonne from ‘Allo ‘Allo, which didn’t seem to fit.

There were certain elements of the play that were never explained (again unless we just missed the point) – why Gal was constantly eating, why his face seemed a worrying shade of puce for the second half, whether the songs were deliberately terrible (as Andre Previn was behind them I would hope this was the case and that Eric Morecambe had an influence).

The second half of the play seemed to get into its stride more than the first, but it was noticeable that the row behind us was largely empty after the interval – or maybe the previous inhabitants had just found seats with a better view. The comments we picked up on as we shipped out at the end were mixed to say the least – with some people seemingly wondering if their Monday tiredness had impacted on their enjoyment (or understanding).

Whether it was the script or the looseness of the cast (possibly all the cognac), the second half had more of a feel of the fun part of the wedding, where the buffet is done with and the DJ pulls out the Abba mega-mix. A nice little dance routine towards the end contributed to this.

An over-riding sense though was that something had been lost in translation – this being the English language adaptation of a foreign language original. After all, how many times does a Hollywood remake improve on an indigenous success story? As I say, we wanted to like the production, and there are many things to admire, though not quite love – but it just overall felt a bit less than the sum of its parts.

Or maybe the joke is just on us?