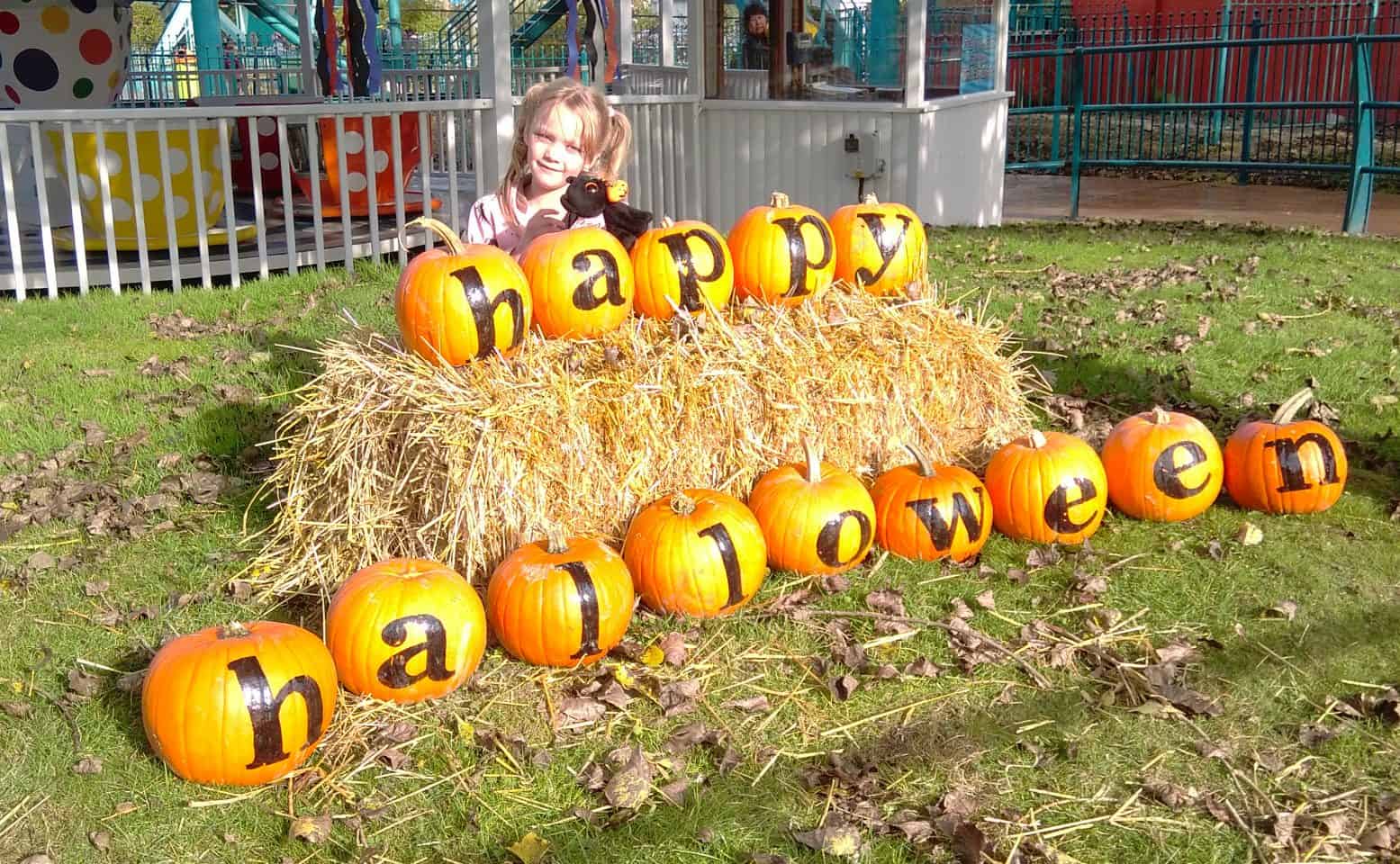 Flamingo Land have really got into the Halloween spirit this week (did you see what I did there – out with the Halloween puns in the very first sentence!).  They’ve gone to town decorating the park and so many of the staff were dressed up (and looking like they had a good time doing so too!).

The big pirate ship theatre show will be running a special spooky show and skeletons were in abundance. We saw the normal show during the day, it was a great mix of comedy, song, dance and acrobatics. The Captain was a cross between Captain Jack Sparrow and Mick Jagger, with a bit if Russell Brand thrown in for good measure! The kids loved it anyway!

Around the park were ‘Happy Halloween’ signs which are ideal for getting nicely staged pictures of the kids, and then spamming all your friends and family with on your social media of choice.

2 for 1 at Flamingo Land

Don’t miss the face painters in the plaza (sat on tables to the right if the pirate ship as you come in) it’s a nice touch for the kids to have spooky faces painted right at the start of your day and adds to the general feeling of fun. They are running a ‘buy one, get one free’ promotion this week if the adults come dressed in Halloween costume and I am impressed that so many did. It gives the park a carnival feel, and we loved it.

At lunchtime and later in the day you can carve your own pumpkins for £1.50 which I think is great. We were too busy with everything else and didn’t get chance but the kids would have loved to have done it.

We visited all our favourite rides (plenty for the children, it’s not just huge scary rollercoasters, see my earlier review here for lots more info on rides) and some different ones too. We are usually so focussed on the rides we don’t generally have time to see the animals but Master T wanted to visit the Aquarium, so we did. You can take the train ride and see the rest of the animals and get off just near the Aquarium. It’s not huge and fancy like The Deep or The Sealife Centre, but worth a look, and my two enjoyed it.

We planned to go straight to Children’s Planet after the Aquarium but were attracted by an amplified voice announcing that a show was about to start. I thought it might be a sealion show, so Master T and I hurried in. The seats were tiered and quite full. Master T was heading up towards the back when I noticed two empty seats right next to the aisle on the front row. The nearest ones were disabled seats so I assumed other people perhaps thought these two were and then avoided them.  Anyway, the show starts and it’s not sealions, it’s a bird show (anyone can make that mistake, right?). The host introduced a series of birds and a little of their history. One of the favourites was Charlie an extremely clever talking Parrot.

They also showed an Ibis that liked to fly very close to the audience’s heads. The trainer took him around the stage and then up to the top tier before flying him back down, again very close to the audience.  Turns out, one of those two seats, yes the one I was sitting in, was right in the flight path of the Ibis. Every time the trainer flew him down, his claws raked through my hair. We are not just talking a light ruffling breeze here, we are talking full on, new hairstyle time. Much to the amusement of the rest of the audience!

Ooh – another spooky recommendation I have – don’t miss the 4D cinema. They only run it at certain times so maybe pop in there first to see what time it’s on and plan your day around it. It’s a ghost story – the Goosebumps ‘Haunted Lighthouse’. It’s spooky but not too scary though as Miss H (who is normally quite wussy) was fine.

We had a great day. The weather was cold but it was sunny and the sky was blue, a perfect Autumnal theme park day

Have a look at the Flamingo Land website for all the details.

Looking for other Halloween Events?  See my round up here.

Flamingo Land kindly invited us to visit to review. All opinions are my own and not influenced in any way.