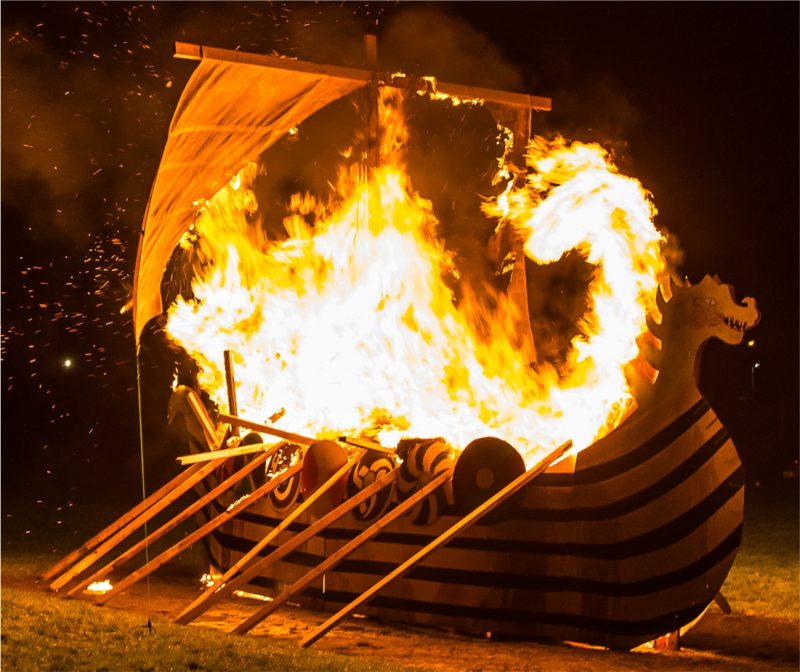 This year’s Flamborough Fire Festival promises to be the most spectacular ever! The Festival organisers plan to burn their Viking Longship by setting fire to it with a ring of two thousand flaming Viking torches!  The Festival, now in its fifth year, will take place at 10.30pm at the Festival Arena in Flamborough on New Year’s Eve!  The Team have been working hard, all summer, building the Longship and preparing the event to accommodate the lighting of over 2,000 Viking torches!  The Festival’s Organiser, Jane Emmerson, said “this year’s Flamborough Festival is going to be the biggest Festival of Fire ever seen in mainland UK!”

The lighting of over 2,000 Viking torches is just one of the new attractions to this year’s Festival with others being flaming Fire Swords, a Viking Mead Hall and more than thirty Flamborough Fireballs in action! This will be followed by a magnificent Fireworks Spectacular set to music at midnight!  The Festival will have increased viewing areas so everyone can get a good view of all the action!

The Festival’s Arena will, once again, be festooned with coloured lights with the Battle drums resounding all around!  At the start, the Festival will be besieged by handsome looking Viking invaders, led by King Canute wielding his Fire Sword and leading the invasion of Flamborough along with the Great God, Thor with his mighty hammer!

The Flamborough Fireballs will also be in action – with more than thirty fireballs on display!   The locals  swing balls of fire around their heads as part of their New Year Eve Celebrations.  In the days when Flamborough was a Viking stronghold, the community took to the streets with fire, to cleanse the air of the old year’s spirits and welcome in the new! The sight of all the fireballs burning in the midnight air is only ever seen once a year!

The Festival welcomes everyone and encourages all children, friends and families to take part in the Festival’s Torchlight Procession and the Viking Costume and Longship Parade.  There will also be prizes awarded to the best dressed Vikings so everyone is encouraged to come in their Viking dress!  With the event now in its fifth year it has attracted more than 15,000 visitors, from all over the country, who absolutely love getting into the spirit of the occasion and dressing as Vikings!  The Festival is a wonderful way to celebrate the New Year with all your friends and family!

Jane Emmerson, the Festival Organiser, said “this year the Festival will be an amazing blaze of fire with 2,000 fire torches, fireballs, and an even more spectacular fireworks display set to Viking music!  The Viking Longship will be pulled around the village Green led by fire balls, fire torches and followed by the Torchlight Procession with everyone taking part!  It’s going to be a fantastic night in Flamborough on New Year’s Eve and we hope everyone will come along and join in!  Everyone is very welcome”.

The Festival starts at 10.30pm in the Festival Arena on the Village Green on New Year’s Eve – Tuesday 31st December 2019 with the Burning of the Viking Longship, the Flamborough Fireballs and a Torchlight Procession followed by a Fireworks Spectacular when the clock strikes midnight to welcome in the New Year.  So come and join in all the fun and celebrate the New Year with us at Flamborough!

Each year the Flamborough Fire Festival is held in aid of local community groups and charities.  The Festival Organisers are encouraging everyone to come in full Viking Costume so all Children, 12 years and under and all adults, in full Viking Costume, will be allowed into the Festival for Free!   Any others kindly attending the event will be asked to give a suggested kind donation at the gate.