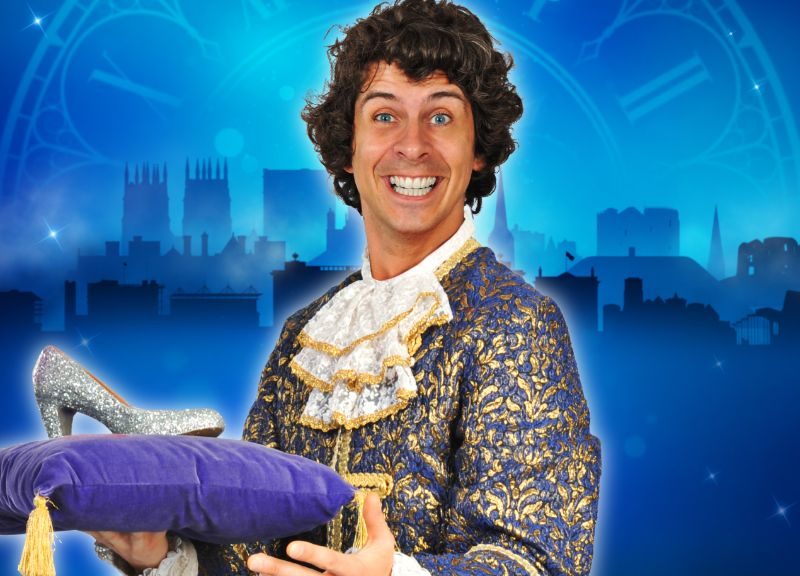 It’s all change at the York Theatre Royal this year with a new style panto and cast in the eternal favourite Cinderella.  We all went along to see what it was like (oh, yes, we did!).  A panto really is a highlight of Christmas, and this was no exception. 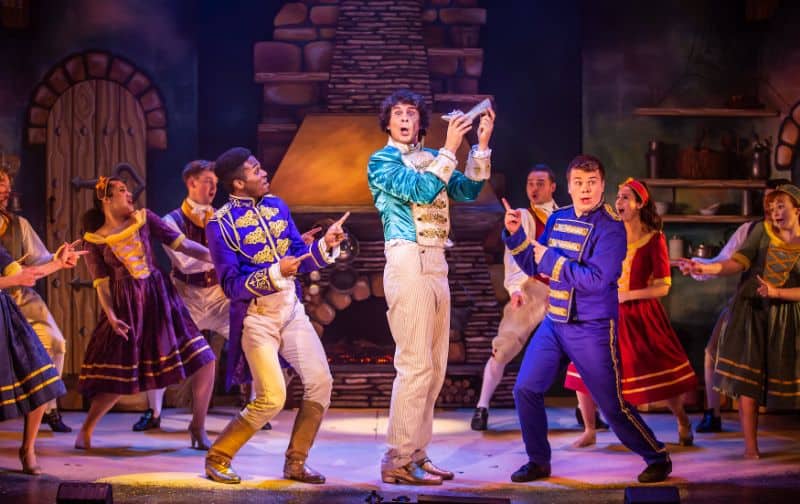 The new style panto catered much more to younger families, and not just because Dandini was played by familiar face, Andy Day from CBeebies.  The style, and jokes were more accessible to children.  In fact, I was a little worried during the performance that my great hulking teens might be finding it a little young for their taste.  I needn’t have worried though, they really enjoyed it and discussed it (almost) enthusiastically on the way home, which is as ringing an endorsement as you get from a young teen! 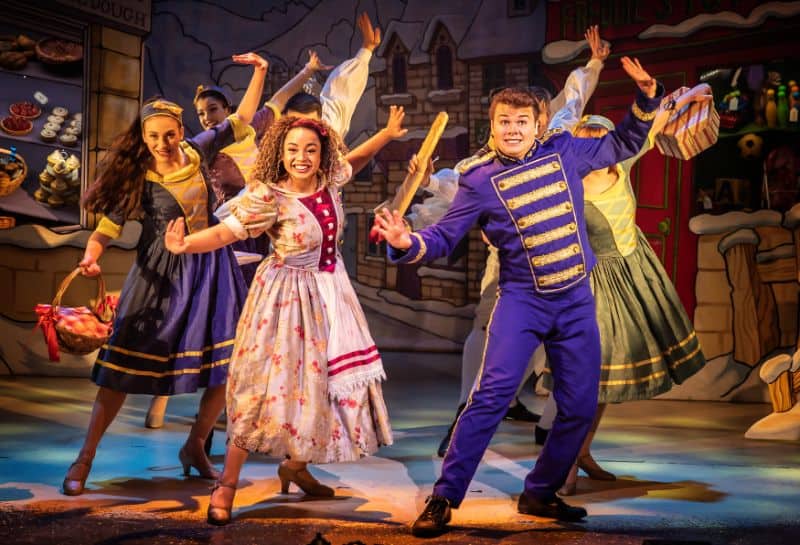 There was a great mix of jokes, singing and dancing as well as some impressive fairy dust when the Cinderella coach came to life and (practically) flew out into the audience.  I also loved the graceful aerial silks act (think acrobatics, hanging from long fabric ribbons fastened at the top of the stage).  The panto featured some great comedic characters – Buttons will be very popular with the younger visitors, a friendly, likeable character with his sidekick Gordon the monkey.  We also loved the raucous humour of the two ugly sisters. 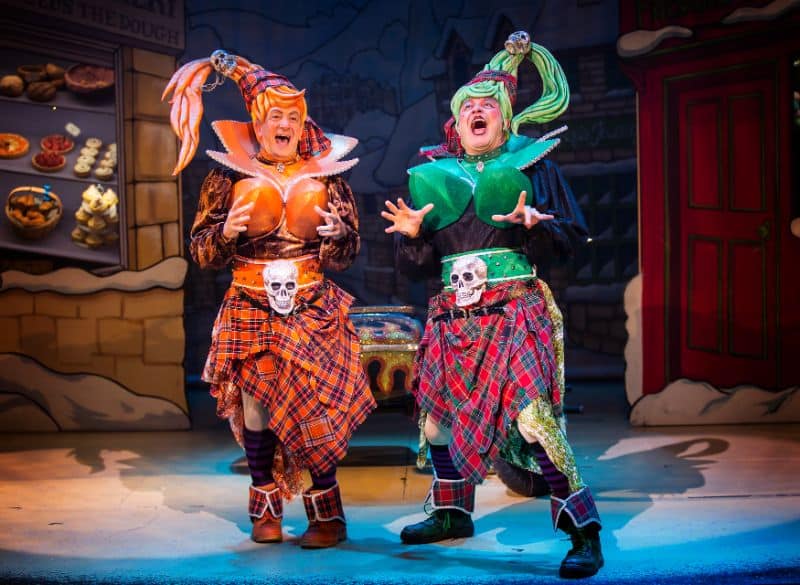 If you haven’t got your tickets yet, get them snapped up.  It’s a perfect night out, especially if you have some younger members in your family – they will love it! 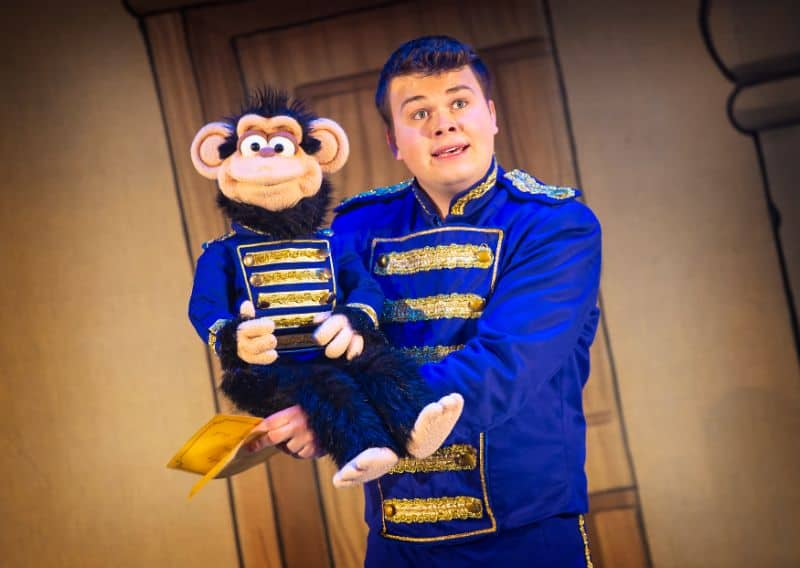 This timeless rags-to-riches story will be relocated to the city of York, with the stage coming to sparkling life with magical transformations, glittering sets, stunning songs and side-splitting laughs. Co-producing with Evolution, one of the country’s most successful and award-winning pantomime producers, the Theatre Royal is creating a brand new pantomime for everyone – with the promise of a truly epic spectacle and heaps of hilarity. 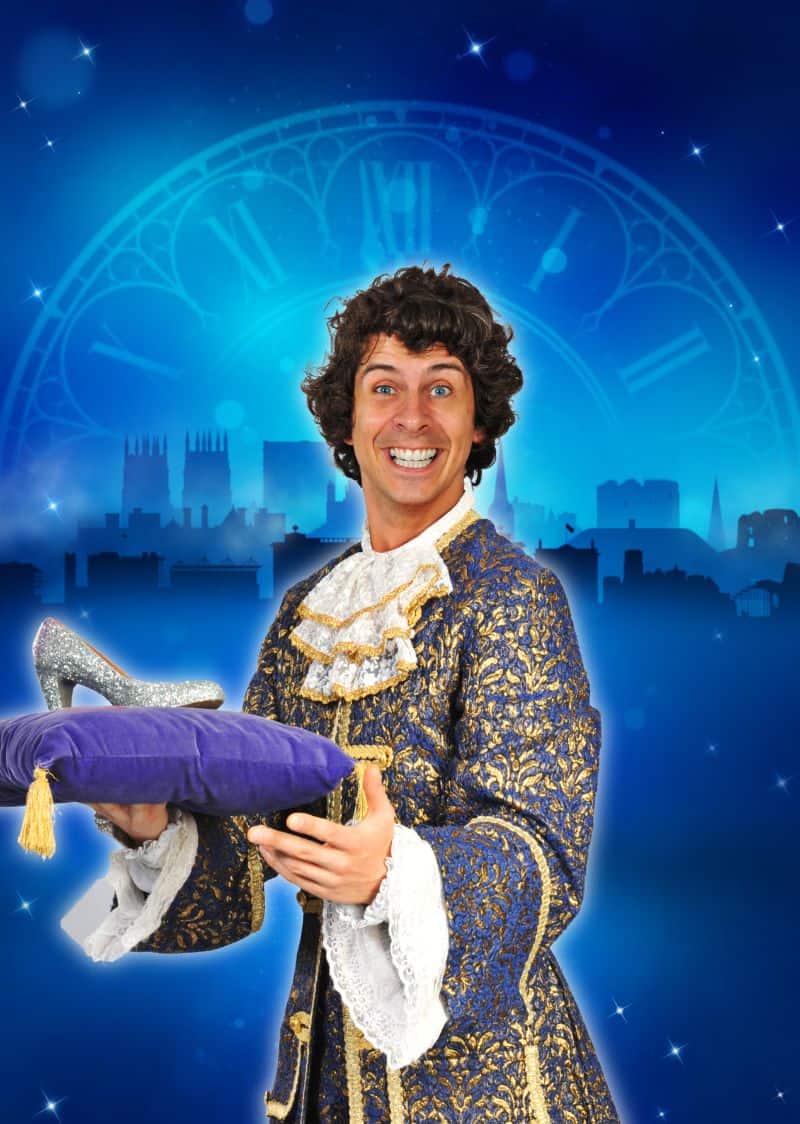 One of CBeebies most popular personalities Andy Day is joined by two familiar faces from York Theatre Royal’s Travelling Pantomime – Robin Simpson and Faye Campbell – in Cinderella at York Theatre Royal this Christmas.

This most magical pantomime of all can be seen from 3 December to 2 January.

Since joining CBeebies in 2007 Andy Day (Dandini) has become widely known as a presenter and for his animal and nature programmes in which he tackled dinosaurs, investigated baby animals and went on safari. In 2009 he was nominated for a Children’s BAFTA award for best presenter.

His previous pantomime appearances include the CBeebies annual televised pantomime as well as the Genie in Aladdin, Dandini in Cinderella, Muddles in Snow White and Billy Goose in Mother Goose. 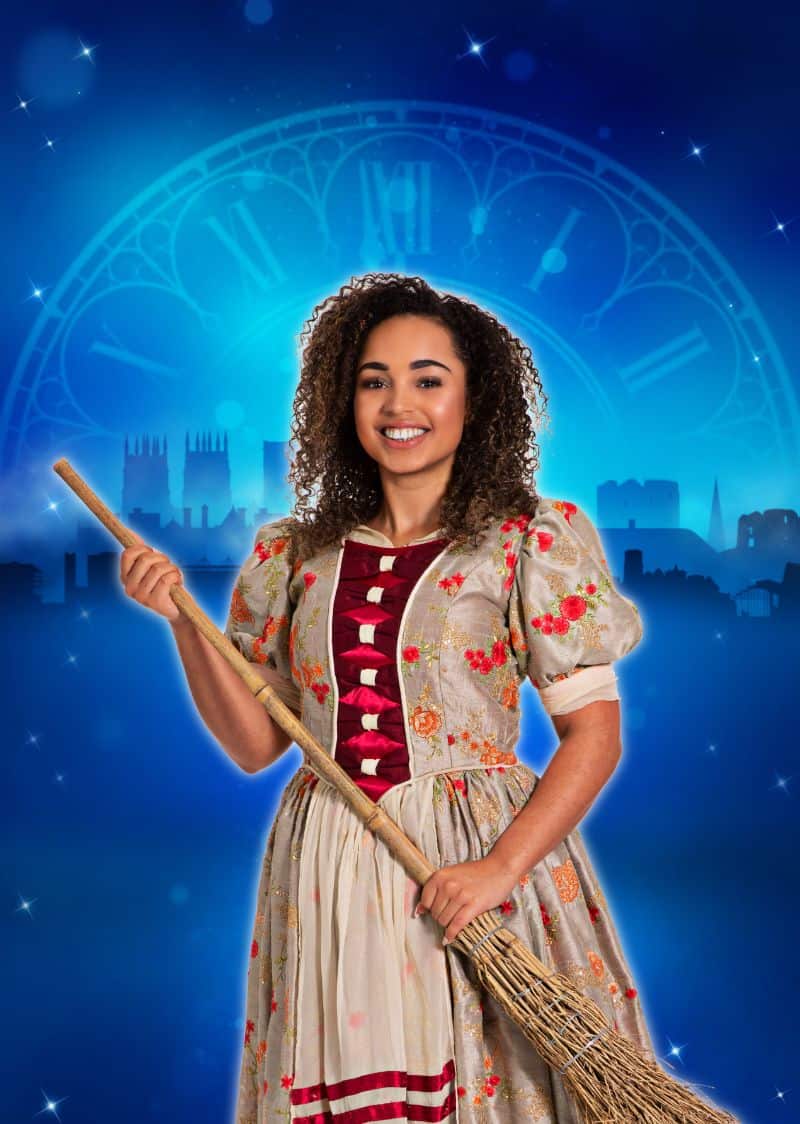 Andy also fronts his own live band Andy and the Odd Socks. They will again be launching Odd Socks Day for Anti Bullying Week in schools up and down the country alongside The Anti Bullying Alliance, a charity of which Andy is a passionate Patron.

Faye Campbell (Cinderella)  played The Hero in Jack and the Beanstalk and Dick Whittington in York Theatre Royal’s Travelling Pantomime last December. Actor and storyteller Robin Simpson (Sister) was Dame Trott in the Travelling Pantomime, after playing dame for three years at the Lawrence Batley Theatre in Huddersfield. He’s joined as the other Sister by Paul Hawkyard.

Comedian and ventriloquist Max Fulham (Buttons) has played leading comedy roles in pantomimes throughout the UK, being voted Best Speciality Act in the British Pantomime Awards. Max has created his own comedy series called Drivel Pedlar for his You Tube channel. In summer 2022 he’ll play Muddles in Snow White at the new Sydney Coliseum in Australia.

The Theatre Royal’s Cinderella will relocate the timeless rags-to-riches story to the city of York, with the stage coming to sparkling life with magical transformations, glittering sets, stunning songs and side-splitting laughs.

Co-producing with Evolution, one of the country’s most successful and award-winning pantomime producers, York Theatre Royal is creating a brand new pantomime for everyone – with the promise of a truly epic spectacle and heaps of hilarity. 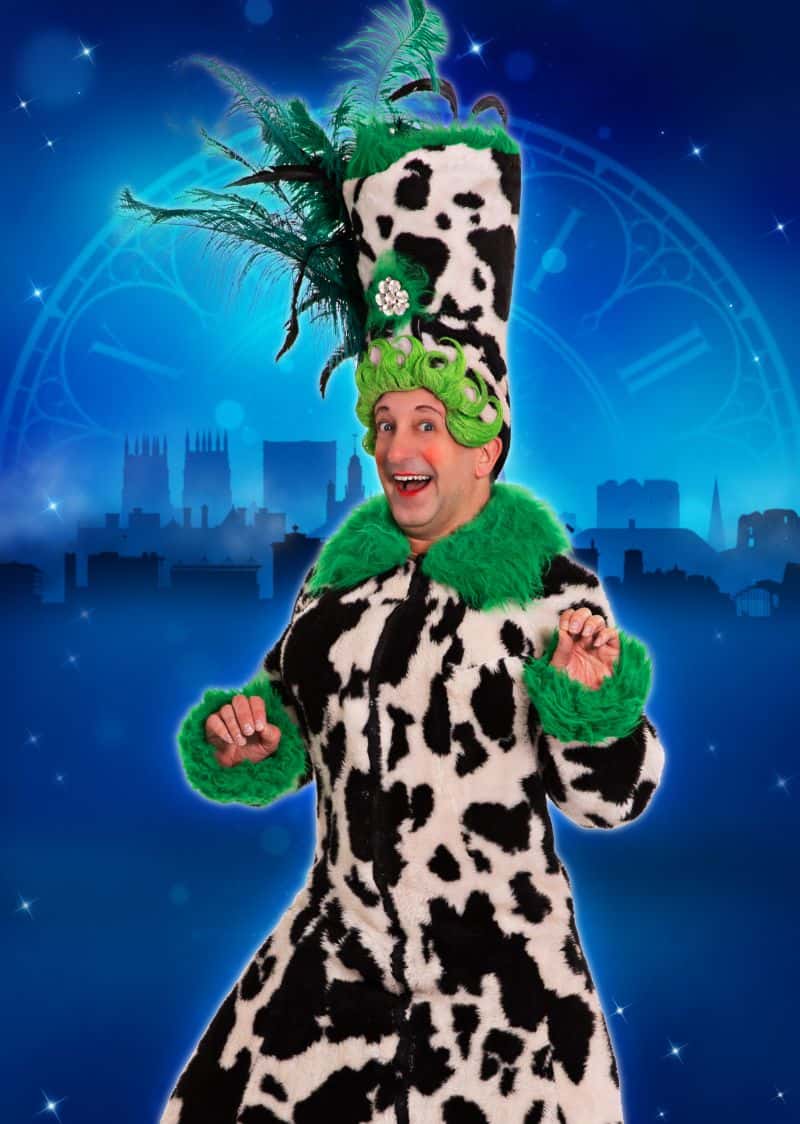 Cinderella will be directed by York Theatre Royal Creative Director Juliet Forster, director of last year’s highly successful Travelling Pantomime which toured to community venues in York and also this summer’s production of Around the World in 80 Days.

“We are over the moon to be creating a spectacular new pantomime for the people of York – one that’s tailor-made for the whole family, while honouring the pantomime traditions that our audiences love so much.

“The phenomenal team will give the York Theatre Royal pantomime a new lease of life with a fresh, family-friendly, fun-filled approach to the story of Cinderella, set with pride in our amazing city.”

Evolution Productions was started by Emily Wood and Paul Hendy in 2005 and has built a reputation for superior, bespoke pantomimes with the emphasis on high quality production values, strong casting and genuinely funny scripts. They have twice won Pantomime of the Year at the Great British Pantomime Awards. They are the team behind Sheffield Theatres’ extraordinarily successful pantomime in the Lyceum Theatre.

“Emily and I are absolutely thrilled to be working with York Theatre Royal on Cinderella. We are huge fans of the theatre and we’re looking forward to collaborating with Tom and his brilliant team to produce a wonderful, family friendly pantomime with spectacular production values, a superbly talented cast, and a genuinely funny script.”