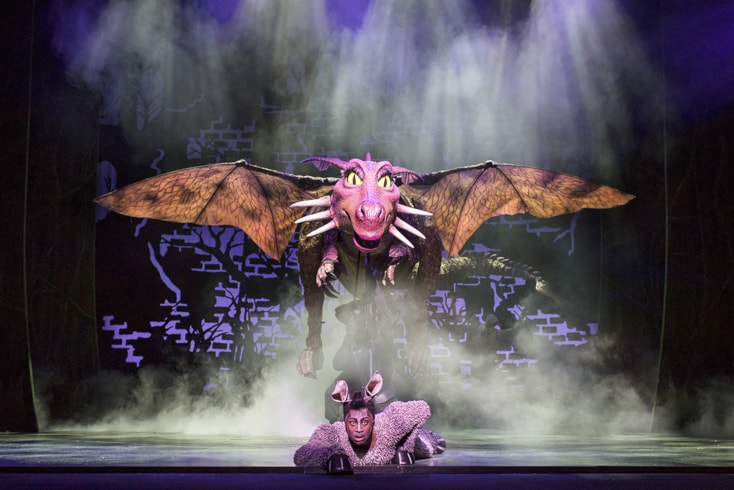 Shrek the Musical at the Leeds Grand Theatre – You may have picked up from previous posts that we are very much a House of Mouse family with regards our film watching proclivities – the joys of kids who, given the chance, would take the remote control to bed/ the bathroom; and whose love of revisiting the same things over and over would make Phil Connors blush.

This review is written by Anna Goldthorpe from Me, Annie Bee.

That isn’t to say though that we haven’t got space in our lives for green ogres, an appreciation of wry takes on fairy tale traditions, and montages set to Bonnie Tyler (starring giant gingerbread men), so when the chance came up to attend the second night of Shrek the Musical at the Leeds Grand Theatre we roused ourselves from our swamp (we haven’t had much time for hoovering recently – don’t judge), mounted our noble steeds (got an Uber) and headed for the land of Duloc.

As I have previously mentioned, the Grand Theatre is a Leeds institution and the surrounds really provide the full immersive theatre experience. After a quick drink in the bar and a perusal of the programme we took our seats to be confronted by a huge closed storybook, illuminated (not surprisingly) in green. As the theatre lights dropped this then creaked open, and so began the first piece of animation/ real life overlap that continued throughout the production.

As you would expect, with Dreamworks being behind the production, the intertwined animation was stunning. The show is a great blend of actors, animation, and puppetry (we were wondering how Dragon would figure, and weren’t disappointed). The Gingerbread Man character is a particularly expressive highlight. The set design was intricate and stunning, and the make-up team deserve particular plaudits for both the general look of the production and, in particular, the transformation of Princess Fiona. 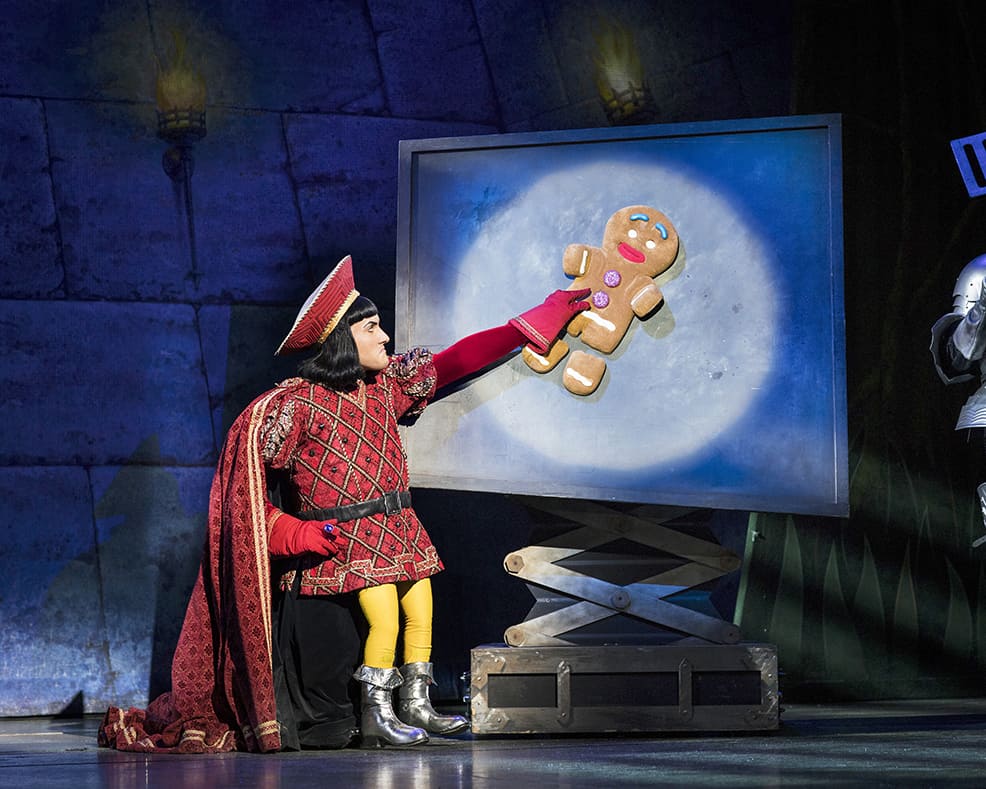 The star of the show for us, however, was the vertically challenged Lord Farquaad. His range of lordly outfits and gymnastic contortions were a wonder to behold, and his fitness themed musical number at the start of the second act set the scene through to the bombastic denouement. We were both in agreement that the lady voicing Dragon (we believe this was Lucinda Shaw) had the best set of pipes we have heard in a long time.

The show has already garnered a number of 5 star reviews, and soundbites such as Shrek-Tacular (lazy, Daily Telegraph, lazy) but, for us, this was really a show of two halves. We both reached half-time wondering whether we aren’t really built for full blown musicals, and reached the conclusion that, whereas the films incorporate known songs, the theatrical version includes mainly purpose written songs that were much less familiar and, for us, that didn’t always deliver. The second half though got into its stride very quickly and flew by in a blur of colour and sound (and a smattering of fart jokes).

We were big fans of the rag-tag of fairytale characters who started the show being evicted from the Land of Duloc to Shrek’s swamp, so setting the whole storyline into action. The helium voiced Pinocchio in particular gave us sore throats in sympathy, and the northern-ness of the Wicked Witch and Sugar Plum fairy was a nice touch within a cosmopolitan voice cast. The underlying themes of societal cleansing (removing the freaks), fear of the different, and wall building did not go unappreciated in this increasingly intolerant world that we find ourselves within. 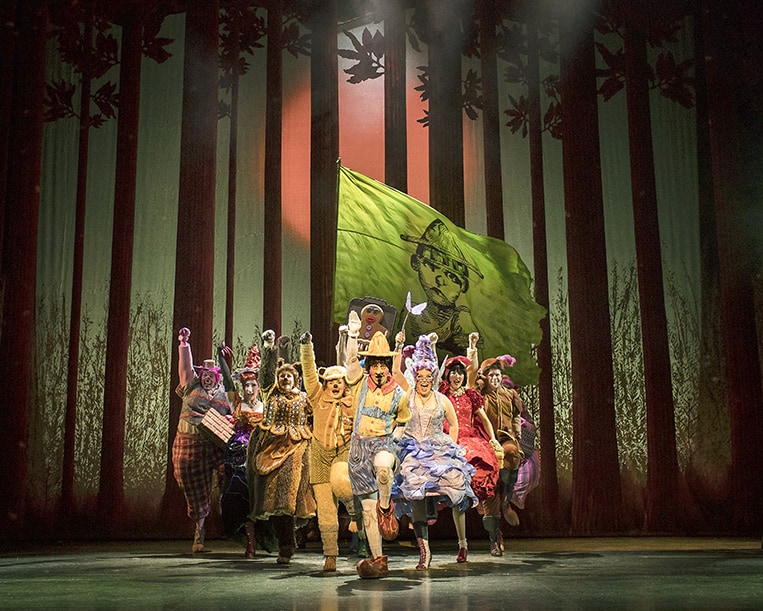 It would be interesting to see the production on a West-End scale as the one thing the Grand is not blessed with is stage space. As a result certain elements felt a little stage school-y and not pared down for the surroundings, and we weren’t totally blown away by the three main characters. We weren’t expecting direct facsimiles of the characters from the films but, for us, Shrek’s Scottish brogue was a bit too lilting rather than scary Glasgow Ogre, Donkey was played too much Ru-Paul than jive-talking Eddie Murphy and Princess Fiona felt a little too much teetering-on-the-edge Katherine Parkinson than cool as Farquaad Cameron Diaz.

The above however are minor quibbles and personal preferences and we would very much recommend sticking on your fake ogre ears, flying your freak flag and heading out to watch if you get the chance and would enjoy a raucous, colour filled night of entertainment. We didn’t take the children and would caution that there are a couple of scary parts – not least if you are wary of mannequins coming alive – and adult themes that may mean it isn’t as suitable for the youngest of Shrek fans.

Shrek the Musical is running through to 6 January 2019.

This review was written for us by Anna Goldthorpe from Me, Annie Bee.

Believe all ‘ogre’ again! Shrek The Musical is set to return to Leeds Grand Theatre from Tuesday 18 December 2018 to Sunday 6 January 2019 as the last stop of a major nationwide tour.

Directed by Nigel Harman, winner of an Olivier Award for Best Performance in a Supporting Role in a Musical for his portrayal of Lord Farquaad, the cast will be led by Steffan Harri, who will play the beloved swamp-dwelling ogre ‘Shrek’. Call the Midwife star Laura Main will appear as ‘Princess Fiona’, joining Marcus Ayton as Shrek’s wisecracking sidekick ‘Donkey’ and Samuel Holmes as pint-sized villain ‘Lord Farquaad’.

Laura Main said: “I’ve been waiting a long time for an adventure like this to come along and now that it has I am ready to swap the surgery for the swamp in one of my favourite musicals. Shrek has made a believer out of me and I can’t wait for this fairytale to take me across the country.”

Shrek The Musical is based on the story and characters from William Steig’s book Shrek! and the Oscar-winning DreamWorks Animations feature film. Originally directed in the West End by Jason Moore and Rob Ashford, the production has book and lyrics by David Lindsay-Abaire, music by Jeanine Tesori with multi award-winning set and costume design by Tim Hatley.