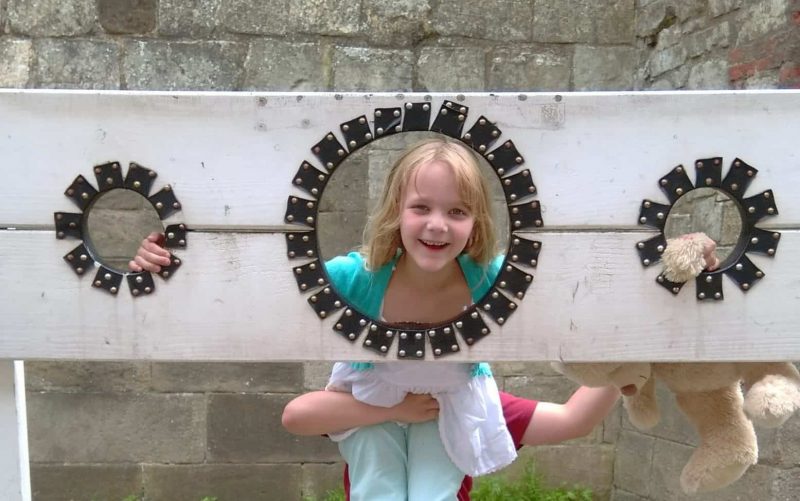 It’s been many years since I have been to the York Castle Museum, so I was glad to return recently and take my children. Hubby was not so keen and it took a bit of persuasion that it would be a good idea. I think he had been traumatised as a child by old fashioned and dull museums.

Anyway, I was very happy to prove him wrong as the Castle Museum is a fab day out! Our visit started before we even entered the museum as there is a lovely vintage fairground outside. I am giving you fair warning to decide whether you want to let your children have a go or not before you visit. We were not expecting it, and had a slight marital disagreement about whether we would let them! It is £2 a go for the majority of rides, and Miss H wormed her way into getting a Carousel ride. Makes for a cute picture though! Master T said he would save his ride money for the shop in the museum (I see you shaking your heads. One with money to spend in the shop while the other has already spent is a disaster waiting to happen isn’t it? Yes, I am a fool)

The museum is split into two sections to the left and right of the shop and cafe. We began on the left. They have sets of different time periods, followed by the toys through the ages section. No prizes for guessing which captured my children’s imagination! They loved looking at all the different toys and then came across a game of pong. If you weren’t born until the eighties, you might not remember this, but it was the first computer game we had in the seventies. It’s the one where you operate a bat at the side of a TV and ping the ball back and forth. It’s beyond basic in this world of Minecraft and PokemonGo! Wouldn’t you know, the kids loved it and had to be dragged away to see the next exhibit!

As I am browsing, Miss H calls me over all excited to show me this:

Yes, the word ‘butt’ in a random sentence. We are very much at the toilet humour stage in our house! (Excuse her filthy nails, my children are revolting…)

At the end of the toy section there is a playing area with various toys and a rocking horse. My two spent an enjoyable few minutes playing tic tac toe (and I had a nice sit down). Isn’t it funny how these simple games still have such impact?

Shaping the Body and a Cheeky Photo

The next section is the ‘shaping the body’ exhibit. I would have loved to browse this more fully, and will have to return. Although my two were not interested in the exhibit itself, there were lots of activities they could and did get involved in there. There were several racks of clothes for them to dress up in and then they can take a walk on the catwalk. Another great photo opportunity if your children are in a pliant mood and oblige you by putting on all the fab costumes. Suffice to say that mine refused. Little horrors.

They did enjoy putting their heads through the large posters though, so I got some good photos there.

Someone at the museum clearly has a cheeky sense of humour as I did spot one or two things that made me giggle. I liked this definition of ‘lumbersexual’, seriously is that a thing?!

Then there were two huge (I am talking meters high) posters. One depicted a man and one a woman, both were x-ray shots. They were fascinating to look at but on closer inspection I had to smile at the contents of the woman’s bag…

And just in case that wasn’t clear enough:

Obviously it went over the children’s heads. 🙂

The next highlight is Kirkgate, the recreated Victorian Street. For those who haven’t been before, this is a full size street set in Victorian times. It’s like walking into a Dickens’ novel. I kept expecting to bump into Mr Dick or Master Bates. (I could have chosen Mr Bumble or Master Copperfield there but I am feeling mischievous and besides what is the point having studied English Lit if you don’t know all the best rude names from novels? Don’t even get me started on Captain Pugwash!)

Ok, where was I?! Ah yes, Kirkgate. It’s fabulous! You can go into all the shops and have a wander around, each based on a real shop that operated in York. You can even buy sweets in the sweetshop, so make sure you remember some change. One thing I loved about it, the atmosphere changes from day to night as you meander. Listen also to the sounds you can hear, gives an amazing theatrical sense of time and place.

After Kirkgate you will go over to the other side of the museum where you will find the Sixties and the Prison. We were far more interested in the prison area! We visited the exercise yard where there were stocks and gallows. Excellent opportunity for the obligatory ‘head in stocks’ pose. Who can resist a ‘head in stocks’ photo after all?!

More Cheekiness with a Cannon

Next Mr W (hubby) sees a cannon in the corner of the yard. It has become a tradition in our family to straddle the cannon in a ‘carry on’ style suggestive pose whenever a cannon presents itself on our travels. Young Master T innocently joins in the cannon straddling without understanding the stifled giggles. We are saving the photos up for his wedding day…!

There is a good sized gift shop and a pretty cafe. We stopped for a drink halfway around (Castle Museum is huge and there is lots to see, and a cuppa is welcome). Nice selection of drinks and cakes. Including gluten free for the coeliacs among us as well as vegan cakes.

First World War and My Dad

We also spent some time in the First World War exhibit, which I found very moving. I was personally interested to see the Victoria Cross of Private Wilfrid Edwards. Wilfrid was Godfather to my father and grandmother and donated his medals to the Museum. I never met Wilfrid as he died a few weeks after I was born, but was always told about him. My father recently visited the museum with more of Wilfrid’s belongings.  (My Dad has since read this post and pointed out that I had spelled Wilfrid incorrectly, and so I have corrected it!  I had copied the spelling from the info at the Castle Museum 🙂 )

The last section we visited was the prison. They have a clever system projecting ghostly images of past prisoners onto the walls of many of the cells. Their stories were frightening, humorous and poignant in turn.  My children particularly liked the stone toilet.

Another popular point with the children was the database where you can search for your family name or the area in which you live to find past inmates. The children searched through our family names and those of all their friends, so now we know everyone’s family secrets!

York Castle Museum is a really good value day out.  You might not also know that they are a wedding venue and do children’s parties.

* Up to four children free per one paying adult. Additional children aged 5-16 will be charged at £4.50 per child. Under 5’s are free.

** Access tickets: up to 50% discount for visitors aged 17-24 or in receipt of Income-Related Employment and Support Allowance, Income–based Job seeker’s Allowance, Pension Credit or Income Support. Evidence may be required.

*** York residents must be in possession of a valid YorkCard, available from all Explore libraries, a York student ID card, or a current Council Tax bill demonstrating that they live within the City of York Council local authority boundary.

York Castle Museum kindly invited us to visit to review. All opinions are my own and not influenced in any way.