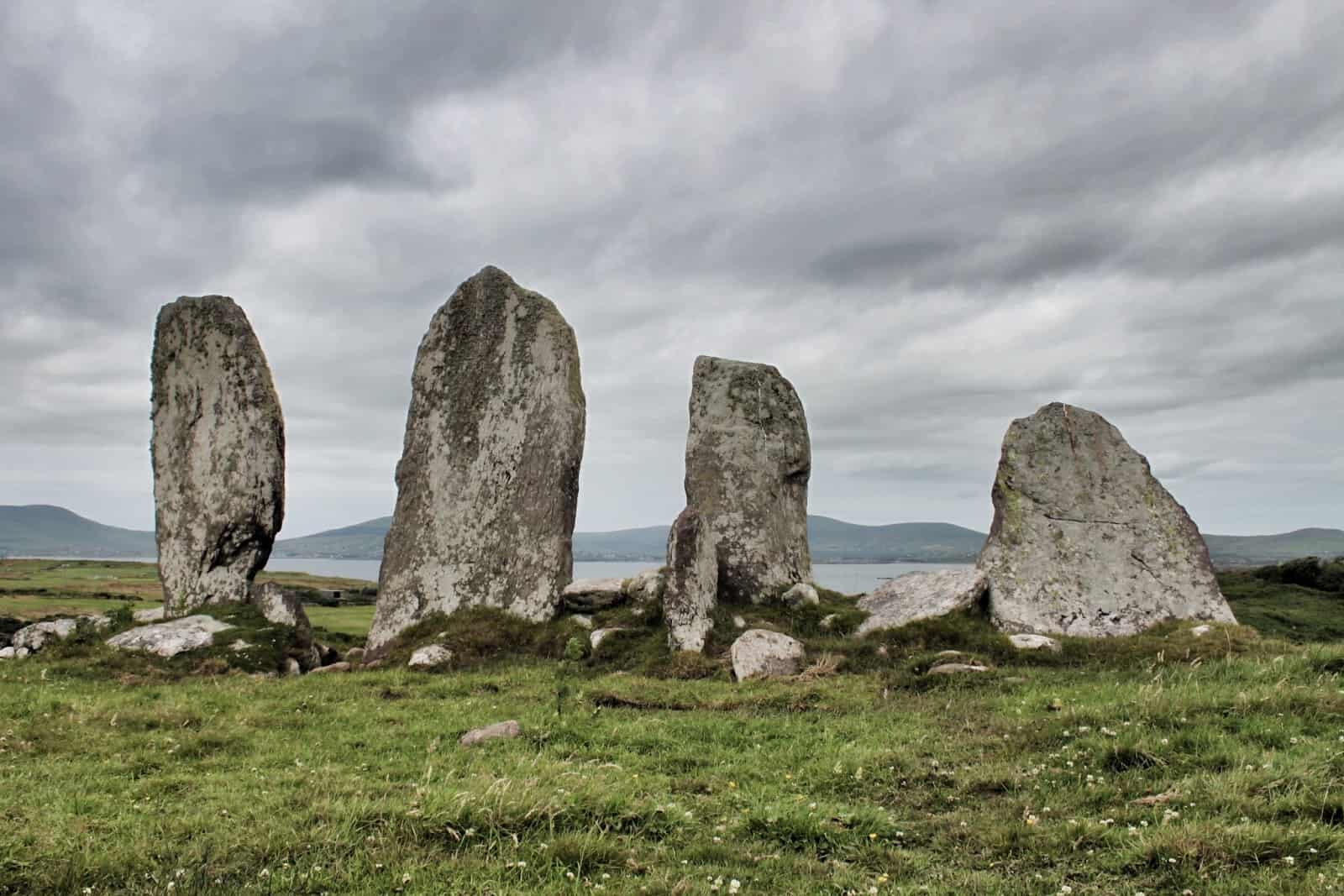 5 Fabulous Things to Do in Killarney was kindly written for us by Amy who blogs about farm life in Utah, USA, homeschooling her eight kids, DIY and travel at Orison Orchards.

Killarney, Kerry County, Ireland, must be one of the world’s best family destinations. As we explored, we saw families everywhere; hiking, biking, tandem biking, swimming, picnicking and climbing. All ages, sizes and types of families were enjoying Killarney National Park as well as the fun beaches, quaint towns and picturesque historical sites all over the Iveragh Peninsula.

Hotel Killarney, where we stayed, was the ideal hotel for families, with a gigantic indoor playroom, game room for older kids, multiple outdoor play areas, and free clubs for all ages with spectacularly fun offerings. Hotel Killarney’s various dining rooms are also very child friendly. Each morning that we had a fabulous Irish breakfast and we were impressed at the number of families dining together.  It was the perfect time to visit Ireland.  While you are in Killarney, here are 5 places you absolutely must visit.

FYI, The Ring of Kerry circumnavigates the Iveragh Peninsula on the west coast of Ireland. Everything on this list is situated along the Ring of Kerry.

Muckross House, Killarney Ireland. Beautiful garden in the side yard 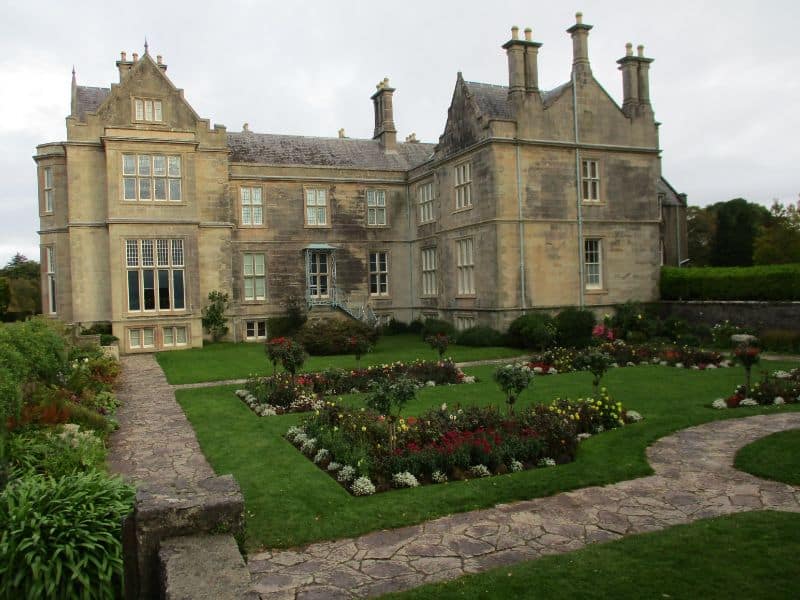 Muckross House was built in 1843 for the Herbert family. Queen Victoria visited in 1850, then purchased by Arthur Guinness and finally gifted to the Irish Nation in 1932, it became the basis for the present day Killarney National Park.  Muckross has 62 exquisite rooms. They don’t allow photos inside, so you’ll have to go here to see the beautiful interiors. The carved crown moldings boggled my mind as they were not mitered.

Our amusing tour guide taught us the origin of a couple interesting phrases, such as ‘mind your own beeswax’, coined because women spread thick beeswax-mixed-with-talcum-powder makeup, designed to make them look extremely pale (why?), over their faces, and the makeup would melt if they sat too near a fire. Ornate screens were placed at face-level to protect the makeup from dripping down their chins. Can you imagine?

I particularly enjoyed the kitchen. Having toured other kitchens of this time period, which were usually in dark, dank basement corners or leftover spaces, I was impressed at the size, convenient placement and layout, and the light in the kitchen.  Your children will enjoy seeing the nursery and children’s rooms, and especially the child-size door built for the Herbert children, but their favorite part of the tour will be outside, where the landscaping seems to have been installed with children in mind. Stone pathways stretch through miles of forests and we found myriad pockets under trees and hidey holes just right for little people in the few minutes we allowed ourselves to walk.

You can see the huge front lawn that disappears into the beautiful lake. I’m sure that would have been a dream place to play. Today you can hire jaunting carts to drive you around the lake and grounds. 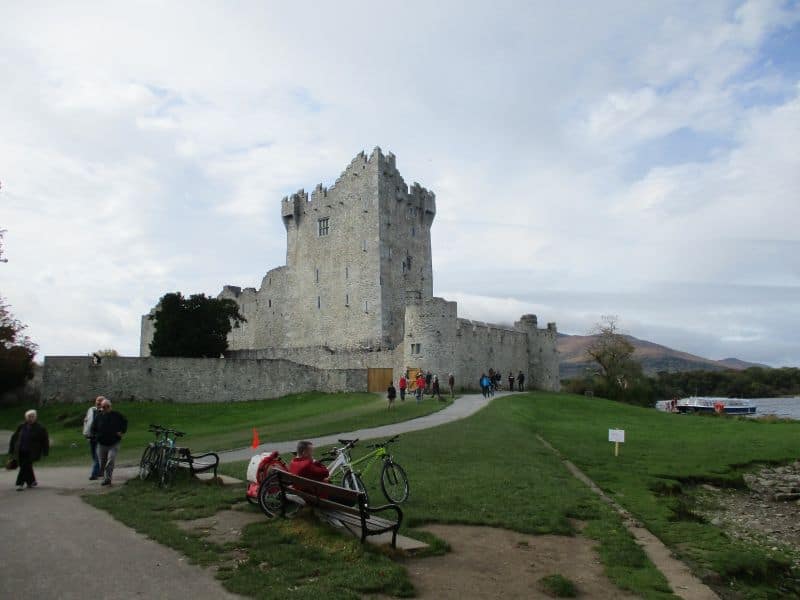 This ‘castle’ was not at all what I expected. I had read that it was a tower house castle, but still I expected so much more. I tend to forget that Castles were defensive structures and instead think of Disney princesses.  Tower houses are basically just square, stone towers with one room per level and a very narrow spiral staircase in one corner. They are very prevalent in Ireland, and some are still inhabited today. Ross Castle is one of the best preserved examples and has been completely renovated, even including period furnishings.

A couple of the levels would have had a wood-beamed floor in order to reduce weight, and the others would have been stone. Inhabitants would cover the stone floors in thrushes for comfort and the doorways would have raised ‘thresholds’ to contain the thrushes. Thus, the invention of the word threshold. The sole purpose of the Irish tower house, which would have been the stronghold on an Irish chieftain during the Middle Ages, was defense against marauders. As such, the castle was far from comfortable.

Windows were mere vertical slits, staircases were narrow and uneven, the rooms were small and cold and dark. I couldn’t imagine living here, but I know my boys would have been enthralled to be shown all of the castle’s ingenious defenses.  The front entrance was secured by an iron grill at the outer wall, which could be closed from inside via a chain that could then be secured even if the front door was closed. This room provided small side access holes and had a ‘murder-hole’ in the ceiling which allowed the defenders to attack anybody in the room.  The front door was constructed of two layers of thick Irish oak, one layer 90 degrees to the other with the boards riveted together. It opened inward and was backed by two heavy beams fitted into the stone structure.

Ross Castle, and other tower houses also incorporated machicolations, stone structures at the top of the castle protruding out from the wall with a hole in the floor. There are two on Ross Castle, one over the front door and another on the back wall. The one at the front would allow defenders to drop stones or boiling oil on attackers at the front door, the only entrance to the castle. The parapet at roof level is crenellated, providing ups, ‘merlons’ and downs, ‘crenels’, to allow defenders to hide behind the merlons while firing through the crenels.

During the tour I kept thinking how much my boys would have loved all of the strategic defenses. Sure enough, as we drove to our next destination my ‘oldest boy’ aka my husband could only talk about his ideas for modernization and improvement of the defenses, while my thoughts centered around improvement of comfort and aesthetics.
Again, we were not allowed to take pictures inside, thus the illustration I posted above of the interior.  The addition to the rear of the tower house was made during a point in time when the castle was used as barracks. It now houses a display about the history of Ross Castle.

If you have a couple of hours, you can take a boat ride from Ross Castle out to Innisfallen Island and explore the Abbey ruins there. 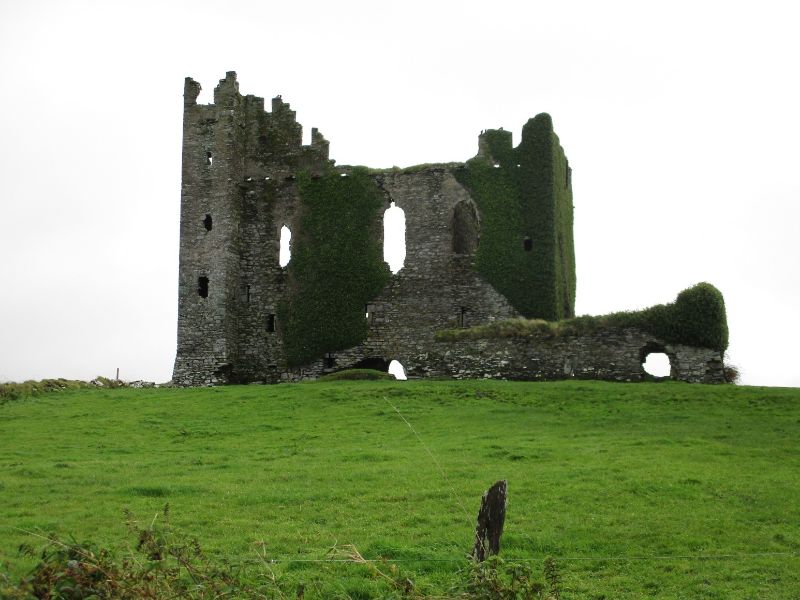 We began our drive counter-clockwise, in order to be going the same direction as the tour buses so we wouldn’t have to pass them on the narrow roads. There are so many interesting things to see, you can’t possibly visit them all in a day. Unfortunately, we only gave ourselves two days–one to explore Muckross House and Ross Castle, and one to drive the Ring of Kerry.   There were lots of tourist buses driving the same route as us, which stopped less frequently and only for short periods of time, so I can’t recommend seeing the Ring of Kerry by bus. In a car you can stop wherever you like, for as long as you like.

Have a look at this great post for more great things to do around Killarney.

All three of these places are within a few minutes walk of one another, near Cahersiveen. The castle is high on a grass hill facing the sea and is fenced off, but you can enter and walk around the ancient forts and wonder about the families who built and used them. These two forts are similar to the many circular stone forts found along the Ring of Kerry, so instead of stopping at them all (unless you REALLY like stone forts) pick one or two to stop at and skip the rest. These two stone forts are my favorite because they show two different types of defense in such close proximity to one another and because they are so well preserved. We chose to spend a little more time here and skip the other forts on the peninsula.  Ballycarbery Castle is an imagination’s delight, high on a grassy hill facing the sea. These forts are perfectly located for defense, on a hill overlooking the Atlantic ocean

There are irregular steps leading up to a walkway around the interior edge of the fortress wall, probably intended for firing weapons on marauders.

Clochan, a dry-stacked stone hut, probably a dwelling, on the west side of the fort which contains an opening, pictured next, into the ten-foot thick wall. I imagine it was a hiding place for valuables, as it is small and I can’t imagine any children voluntarily climbing in there.

Cahergall Stone Fort is much larger, with higher and thicker walls.  Built around 600 AD, Cahergall Fort has walls over 25 ft tall and 13 ft thick. All of the stone is dry-stacked so perfectly that your footing doesn’t move at all as you transverse the walls.

Irish history is so interesting and it’s present so quaint! Portmagee, near Cahersiveen and the forts, and one of the cutest towns I’ve ever seen, made a great stop for lunch. You can take a picnic right down to the beach to eat.

We continued on, looking for Eightercua Stone Row, a megalithic tomb south of Waterville. We passed it twice while looking because we weren’t looking high enough on the hill, but some locals told us where it should be and we found it.
Eightercua Stone Row
Our next stop on the Ring of Kerry was the Derrynane house, Derrynane beach and Derrynane Abbey, near Caherdaniel.

Unfortunately, we spent too much time touring everything else and just missed the last tour of the day at Derrynane House. We did get pictures of the exterior, and we explored the grounds, the beach behind it and photographed the Abbey from the beach, since the tide was in and we couldn’t go out and explore the island. Be sure to save some time to play on this wonderful beach and hopefully the tide will be out while you’re there, so you can walk out and explore the abbey ruins on the island!

You could really spend a week or more just in Killarney National Park and not run out of things to see and do. We had two full days, so I think we should have, ideally, planned 4 days in Killarney. Some vacations are busily metropolitan, others are lie-on-the-beach in the sun reading, and others are all active, hiking, climbing, river-rafting and high adventure. Killarney is the perfect blend of all of those and you can direct yours toward whichever you prefer.

You can read more from Amy at Orison Orchards.

Pin 5 Fantastic things to do in Killarney to Pinterest

For more specifically child friendly activities in Killarney, take a look as this post by Have Kids Will Travel or this great post about the cliffs of Moher with kids.