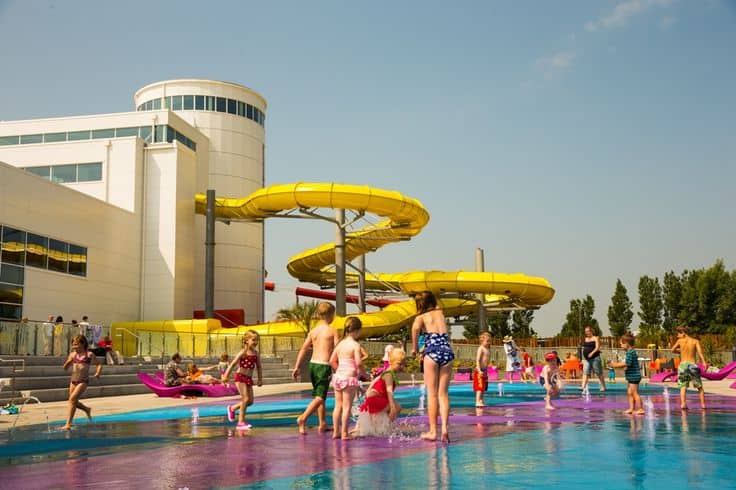 Skegness Butlin’s review – I went on Butlin’s holidays a few times as a child (quite a long time ago now, it has to be said!).  We went to Filey when it was still open, Minehead and Skegness Butlin’s.  When the children were toddlers I suggested to Mr Wonders that we took the children.  He was, it has to be said openly unhappy with the suggestion.  He thought he wouldn’t like it, that it would be too crowded, that he wouldn’t like the ‘holiday camp’ style.  I persuaded him to go – which was a risky manoeuvre as if he hadn’t liked it, it would have been all my fault!  Fortunately he loved it, didn’t find it too crowded or ‘holiday camp’ and we visited again for the ‘Just for Tots break‘ when the children were aged 2 and 4.  We hadn’t been since and we’d always gone in term time when it was quieter, so going in the Summer holidays made me a little anxious.  I needn’t have worried though, we had a brilliant time and I would wholeheartedly recommend it to other families with school aged children. 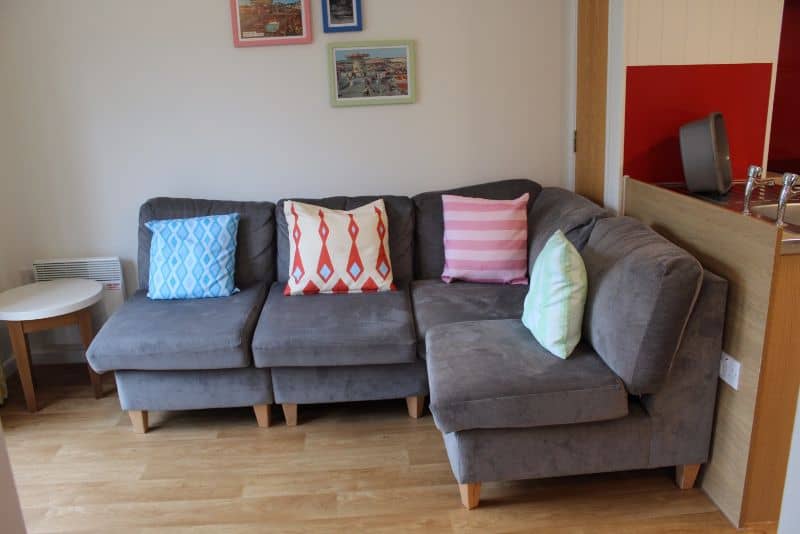 There is so much to do at Butlin’s, the tricky thing is fitting it all in. You will need a PhD in planning to squeeze just a selection of the things you want to do into your time here. You will be given a ‘what’s on when’ leaflet when you arrive, but a sneaky tip would be to download the Butlin’s app beforehand and plan ahead so you are not wasting a precious second when you are there.  There was so much more we would have liked to have done when we were there but were busy from the moment we awoke until we collapsed happily into our beds at night! 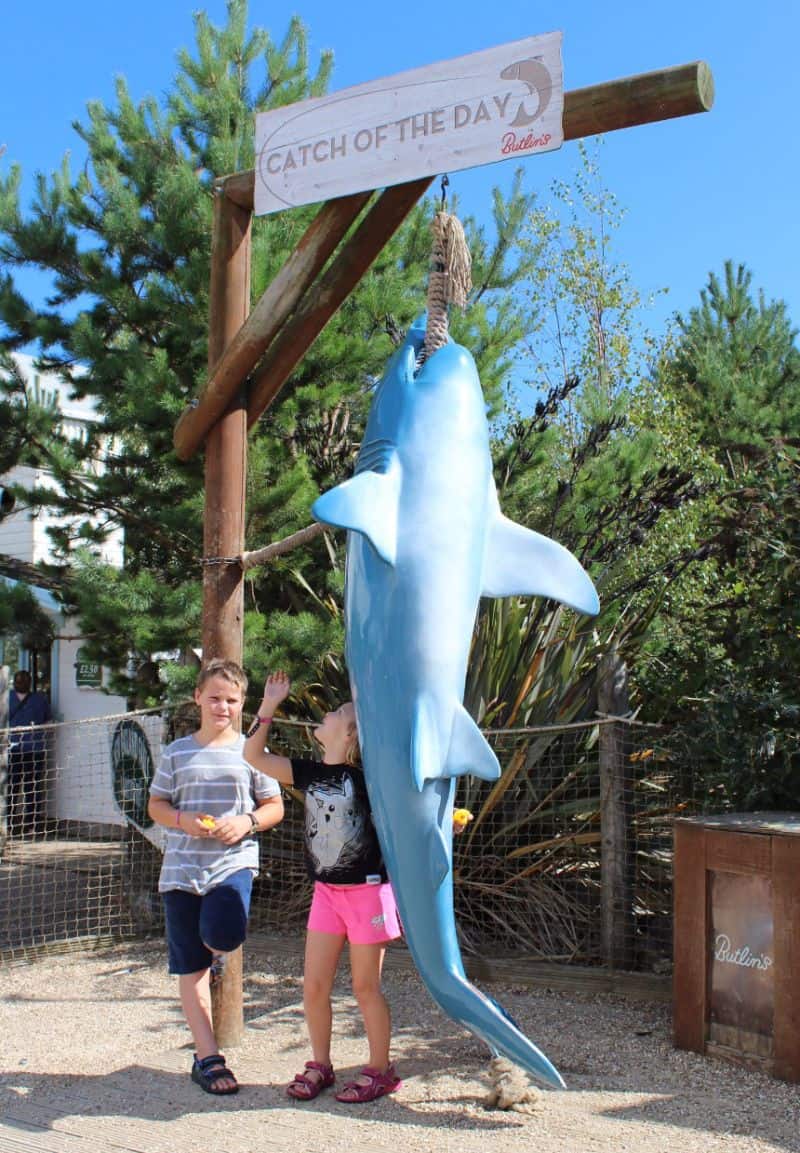 Splash Waterworld, the swimming pool complex is amazing! I was worried, I must admit that, going in the height of summer as we did that it would be too busy for my liking. On our second day, we arrived to a ‘pool is full’ sign, which struck dread into my heart. We queued and was very quickly (like 2-3 minutes) allowed in as other swimmers came out. We had no problem finding a changing room, and once in, the pool was busy but not overly crowded at all – so all was good!  There are lots of big family changing spaces and the lockers are £1 (you get it back afterwards). 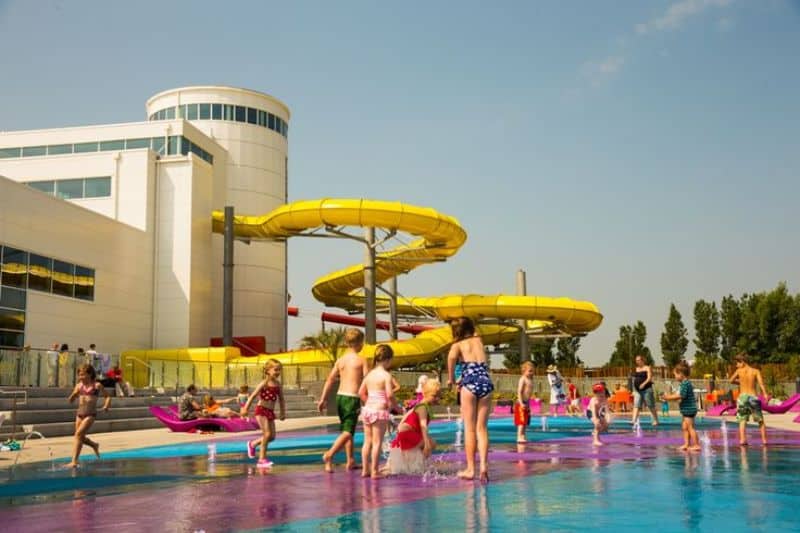 What is there in Splash Waterworld?

It’s a huge complex with lots of different and distinct areas. There is a shallow pool as you enter with a couple of small slides and then further in a ‘cave’ area with lovely twinkling lights and bubbles. From there we moved onto the lazy river. Now, this is my favourite spot, being whizzed around without much effort from myself! It’s about four foot deep, so the kids need to be swimmers or have armbands. Further in there is a wave pool, it’s quite a tame wave pool with a graduated beach, so perfect for younger ones. The biggest pool is a large circular pool with light currents that push you round in a circular motion. Sounds like a lazy river, but the current is much lighter and not very noticeable (so not as good as a lazy river, but better for swimming in!). Above that pool, you can climb the stairs to a large hot tub. This sometimes has a queue. At the far side of the complex you will find the children’s area, which is a large shallow pool (warmer water!). There are fountains and slides to amuse the little ones. 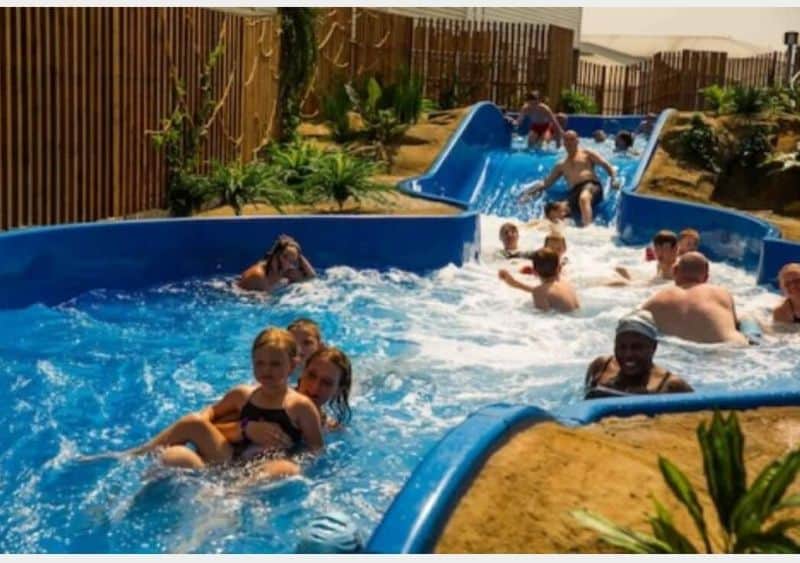 Finally there are some huge (impressive) water flumes! Miss H tried the Vortex – a 60 foot high fast flume –  and loved it. After the twists and turns you land in a big bowl at the bottom that you spin around in, there is even music and disco lights as you spin! You need to be age 8 or over to slide. There is also a faster flume The Jetstream, but you need to be age 10 or over for that. There’s also a family raft ride and – our family’s favourite – the river rapids. The kids went on this over and over again, it’s a wide flume with fast water running down it, you are swept down, twisting and turning with occasional steeper drops. It isn’t scary though if you have a less brave child! The river rapids ride starts indoors, wends its way outdoors and then deposits you back inside. Fab fun! 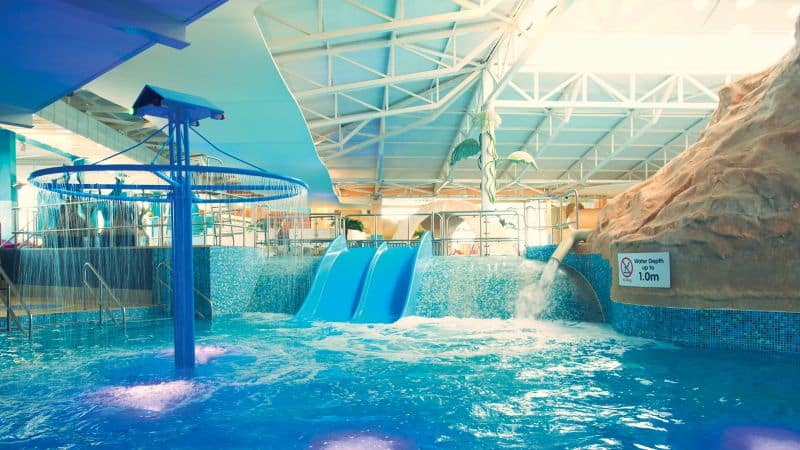 One of our favourite haunts was the fairground. I have always loved fairgrounds and when I was a child and visited Butlin’s, this was where I spent most of my time. All the rides are included so you don’t need to pay extra to ride. 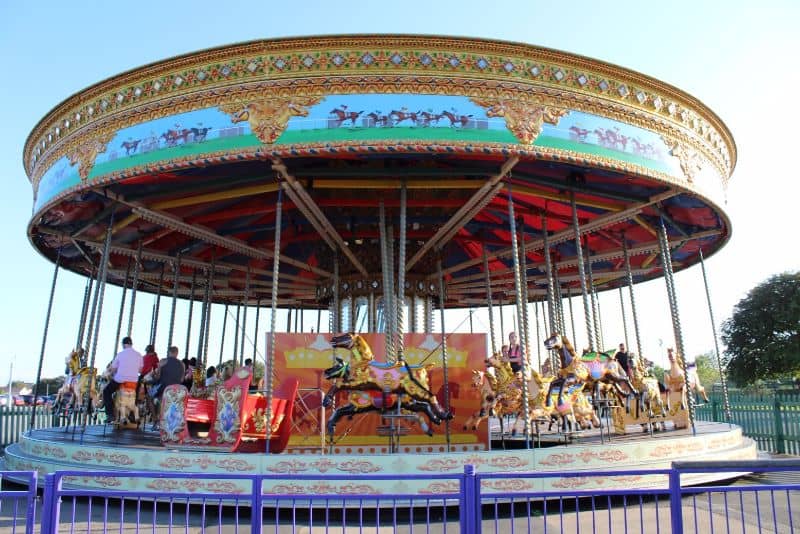 There is a wonderful traditional carousel, the waltzers, bumper cars, the wave and a Mexican hat in the main fairground. There is another fairground for the younger children too in a separate area just for them (we spent a lot of time on those rides when we brought the children when they were tots!). 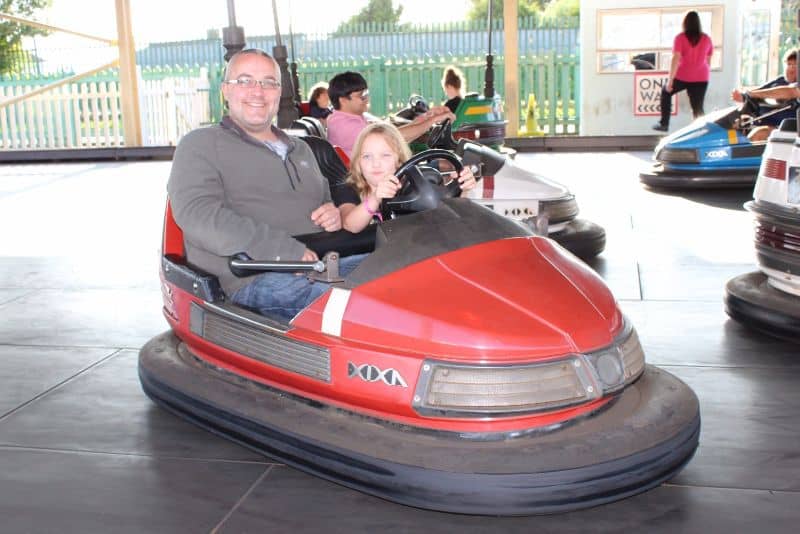 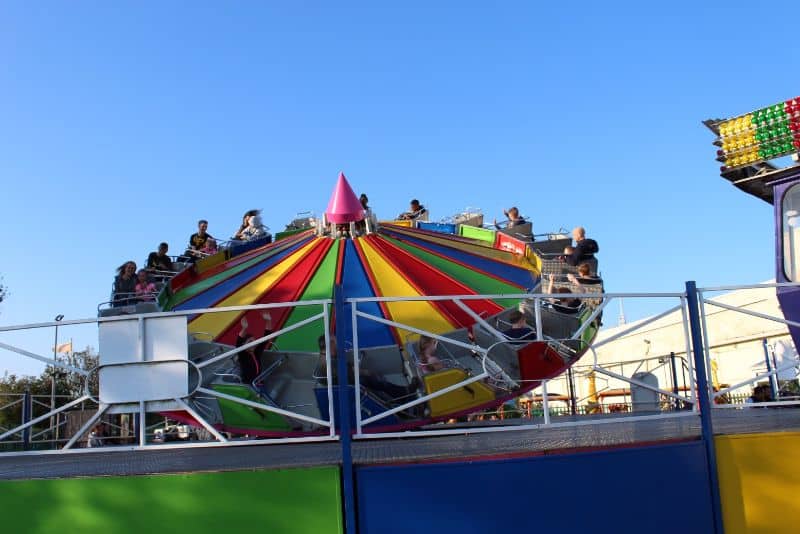 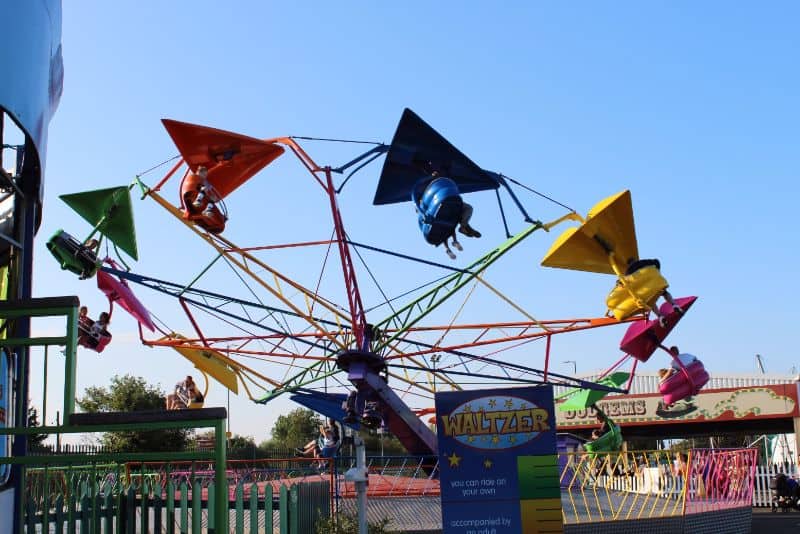 Another love of mine when I was a child was the arcades. I am not so keen now as an adult, but my two love them. In the weeks leading up to our trip to Butlin’s, we put any random spare change in one of those tins you need to destroy to get into – (it’s great as you can’t raid it). Then when the time came, we opened it and shared it out between the children. Most of it went in the arcade 2p ‘penny falls’ machines. 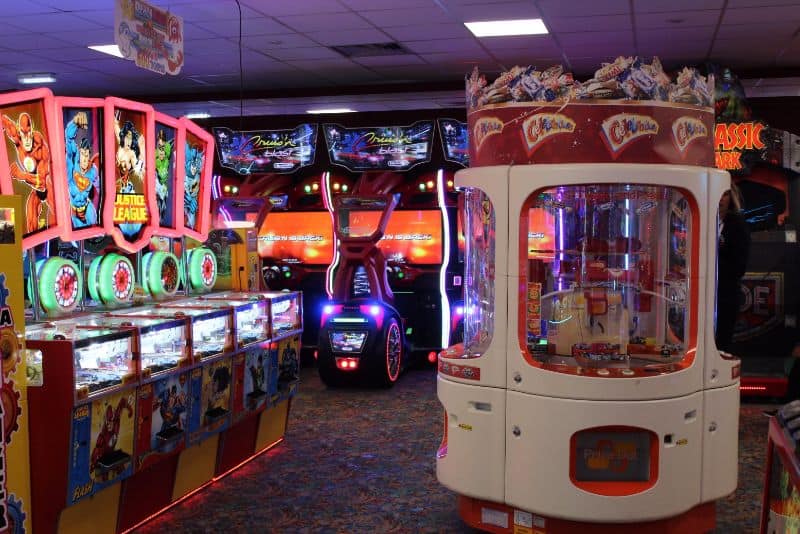 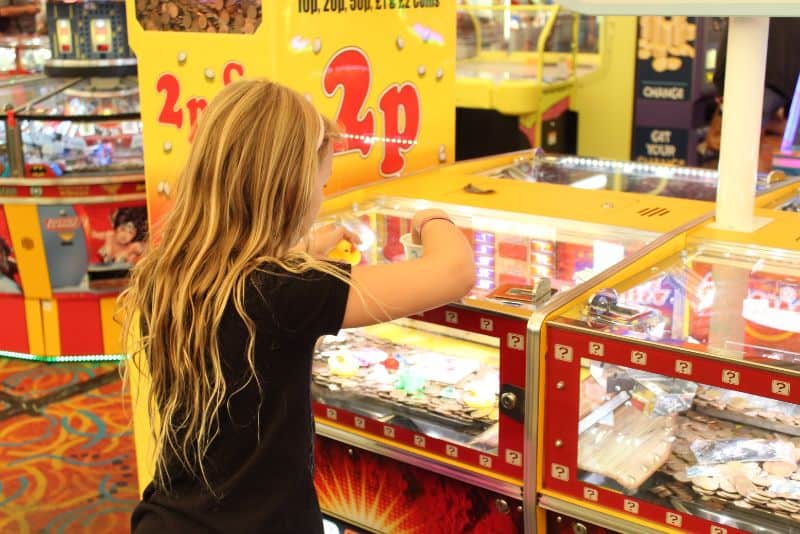 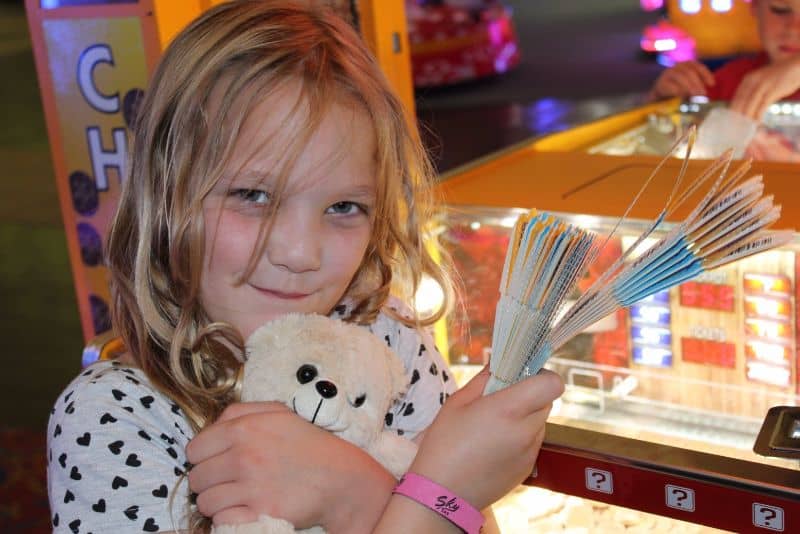 The largest undercover area at Butlin’s is the Skyline Pavilion. Here you will find the arcade, a convenience store, toy shop and sweet shop, as well as a Burger King. The premium dining restaurants can be found here too (make sure you look at my review of the Premium Dining restaurants.)

In the centre of the Skyline Pavilion there is a stage with lots of seating. You can usually find something going on here at all times, and it’s often where the younger ones are entertained or have meet and greets with characters. On one of our evenings there was a ‘silent cinema’ here with a large screen above the stage. All the viewers were given headphones so they could hear clearly. I thought this was a great idea and would have liked to have joined in, but we were already busy doing millions of other things!

The entrance to Centre Stage can also be found in the Skyline Pavilion. This is a huge stage and seating area where the big acts of the weekend perform. There are two seating areas. The downstairs is enormous and seats many people, and then there is an area for standing too. It gets very busy and it’s a good idea to queue beforehand for the best seats. Upstairs is the Sky Bar, a mezzanine level where almost all of the seating had prime views. You do need to pay extra for the Sky Bar, but once you have, you are guaranteed a seat. You also have your bar (smaller queues and table service before a performance). The Sky Bar was worth it for us, knowing that we did always have a seat and a view. You could also consider the B-Line passes which allow you earlier access to the venue’s (but not access to the Sky Bar). 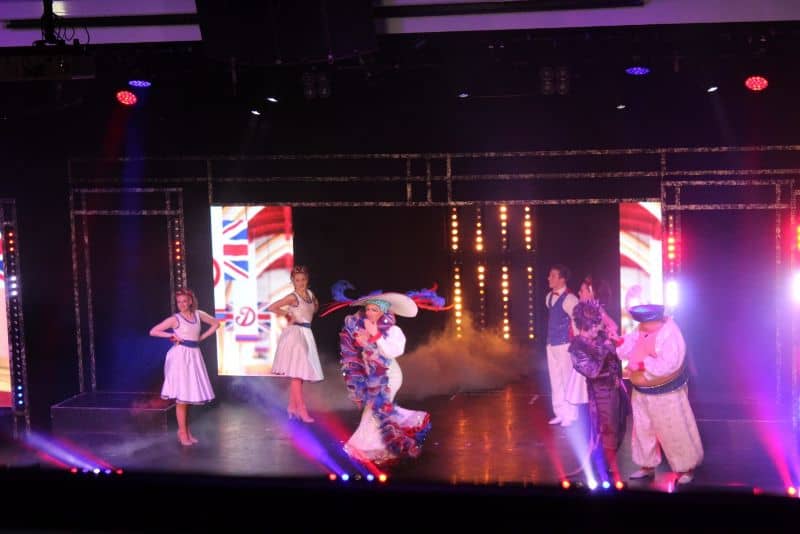 This was the panto ‘Whittington Rocks’, definitely go and see it, it was brilliant!  If you are debating seeing Dangermouse but it clashes with something else – go for the something else (if you know what I am saying!)

The other large entertainment venue is Reds. Performances are staggered throughout the evening and often overlap between the venues, so again, check the app and plan ahead of time!

I loved the idea of the Big Top Circus and we would definitely have done this if we had been there longer. (It’s an activity you pay extra for – around £6 per person).

Throughout the day there are more activities planned for all the different age groups from science to crafts and sports. There is also a beautiful beach, soft play, crazy golf and a climbing wall. The majority of things are included in your Butlin’s break, but some things you do pay extra for. I think there is plenty to do without paying extra for anything though.

Anyway, that’s my review of our school Summer Holiday weekend at Butlin’s.  We genuinely had a great time, if you are considering it, I would say do it!  There is something for the whole family to do, and the kids will love it!

Butlin’s Skegness invited us to stay and review, but as ever, all the opinions expressed are my own.