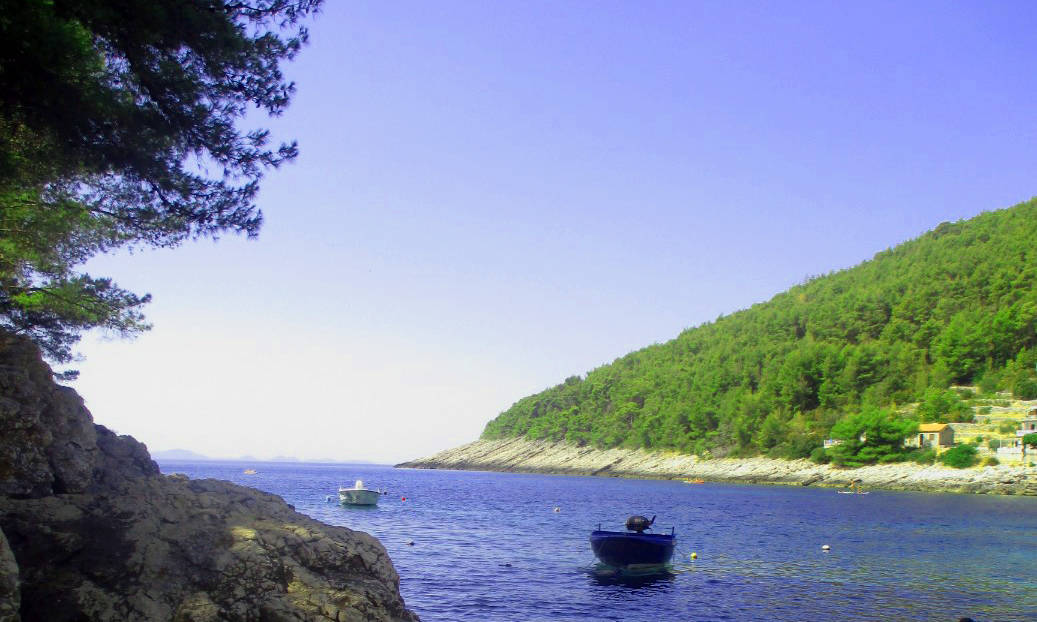 Port 9 Island Family Resort Review.  What we wanted for our family holiday this year was somewhere with better weather than the UK,  somewhere we could explore,  enjoy local cuisine and somewhere where the sea is calm so that we could snorkel.

We chose the island of Korčula in Croatia and managed to tick all of the boxes.  Our transfer from Dubrovnik airport took as long as the flight from the UK but we were rewarded with the most enchanting view of the old town all lit up at night and buzzing with visitors as we were brought by water taxi across to the island for the first time.  If we were doing it again I might stay in Dubrovnik for a while first.

Amazing Views on the Waterfront

For me, Korčula was all about the boats, big ones little ones, yachts, catamarans, ferries and water taxis. We really enjoyed hiring a kayak for an hour and pootled around the bay on our own.  We didn’t go far but you were able to hire one the for the day and really go exploring if you wished.    From our resort you could catch either a buggy or a water taxi into the old town which was around a 30 minute walk.  We did enjoy the walk, which was partly along the water front with amazing views across the bays to the mainland and the mountains.  The water was so very clear it was easy to see the fish and crabs in the water which the children loved to do as we strolled along.

The Medieval old town of Korčula

The medieval old town of Korčula has been described as a mini Dubrovnik with quant narrow alleyways which we loved to explore by day or by night.  At night it looked magical all lit up and the atmosphere was very relaxed and easy.  There are lots of places to eat or drink all with various prices as you would expect with a popular visitor destination, I must say the ice creams were very good value for money and we enjoyed various flavours whilst enjoying the views.

We were very well looked after at the Port 9 Family Island Resort which had so much to offer its guests.  We chose a self-catering apartment which was lovely and had everything we needed included a big balcony and free air conditioning.  There was also a hotel and a campsite with various bars, restaurants and facilities available to all. There was a really good supermarket just two minutes away so we were able to get everything that we needed easily.   I thought the staff were great, really friendly, you only needed to ask and someone was there to help.  There were three pools at the resort– the kids loved the infinity pool the best, the pebble beaches were roped off so that you could swim safely without worrying about the little busy boats that buzzed in and out.  Towels were available for the pool or beach which was great. There were shady areas near the campsite with bean bags and hammocks which was nice to chill out in away from the sun.

Korčula is very proud of its produce and everywhere we went I noticed grape vines and olive trees.  There were lots of tours available so you can enjoy and sample these delights as well as many trips to other islands.  A day trip we really enjoyed was to the little island called Badija.  We caught a water taxi from the resort and spent the day here.  We walked round the island (an easy walk if a little warm) and then rewarded ourselves with cool drinks (ok large beers) at one of the only buildings on the island.  My daughter spotted the deer before we did – who come out to look at the tourists hoping for some food.  Whilst enjoying the deer my son found a stick insect which kept him occupied for some time.   We loved snorkelling here it was so calm and clear and I saw my first ever sea hare.

Lumbarda – is another little town/village around 5 miles from our apartment.  We caught the local bus which stopped right outside the resort.  I must say the bus was very busy but the journey did not take long, we actually enjoyed our visit so much we did it again on another day.  Lumbarda offered a sandy beach for those liking the sand between their toes.   From the beach which had a café we followed the footpath along the shore back into the main town which had various eateries and supermarkets so you get anything that you needed.  The children really enjoyed eating pizza at a bar whilst we overlooked the bay.  I just soaked in the views, everywhere was so pretty with palm trees and little islands to look at and blue, blue skies.   We snorkelled here and found sea cucumbers this time and an awful lot of sea urchins.  One man I noticed was collecting them as I know they are a local delicacy – one I did not get to try.

One evening we dined at Konoba Lanterna one of the resorts water-front restaurants. We climbed a couple of steps and were able to enjoy the views across the water as the sun went down.  We shared an octopus salad to start something we have not tried before– the children were not too sure but very brave to give it a go, we then chose a meat and fish platter to share which was very simply cooked on the grill and was very tasty.  It was great to have the chance to eat some local Dalmatian cuisine and I was able to sample a glass of the local white wine which I must say was very nice.

One of our favourite evenings of our holiday involved a spot of culture.  We were invited to attend a special evening in the old town with the highlight of the evening being a traditional sword dance called the Morseska.  Despite being more than 400 years old the only place you can now see this is on Korčula and is performed by local people it was a very special evening.  The costumes and the choreography were just fantastic – the performance which is a dance gets faster and faster with the men clashing their swords together as they move around creating sparks  – it was breath-taking and the children in particular could not believe their eyes at the spectacle they were seeing.   We were absolutely buzzing when the evening was over; the children were able to hold the swords which were actually really heavy.  Lovely to experience something traditional and a little bit different than we would normally perhaps choose.   The Moreska is performed on Mondays and Thursdays in the old town during the summer holiday season.

We loved our first trip to Croatia

I miss the warmth and watching all the boats but it is time to put the snorkels away for another year.  If anyone would like any specific information on the Island of Korčula, Croatia or Port 9 Island Family Resort.  Do please  get in touch and I would be delighted to answer any questions.

This review was written for Yorkshire Wonders by Teresa Buckle.

Looking for a road trip in Croatia?