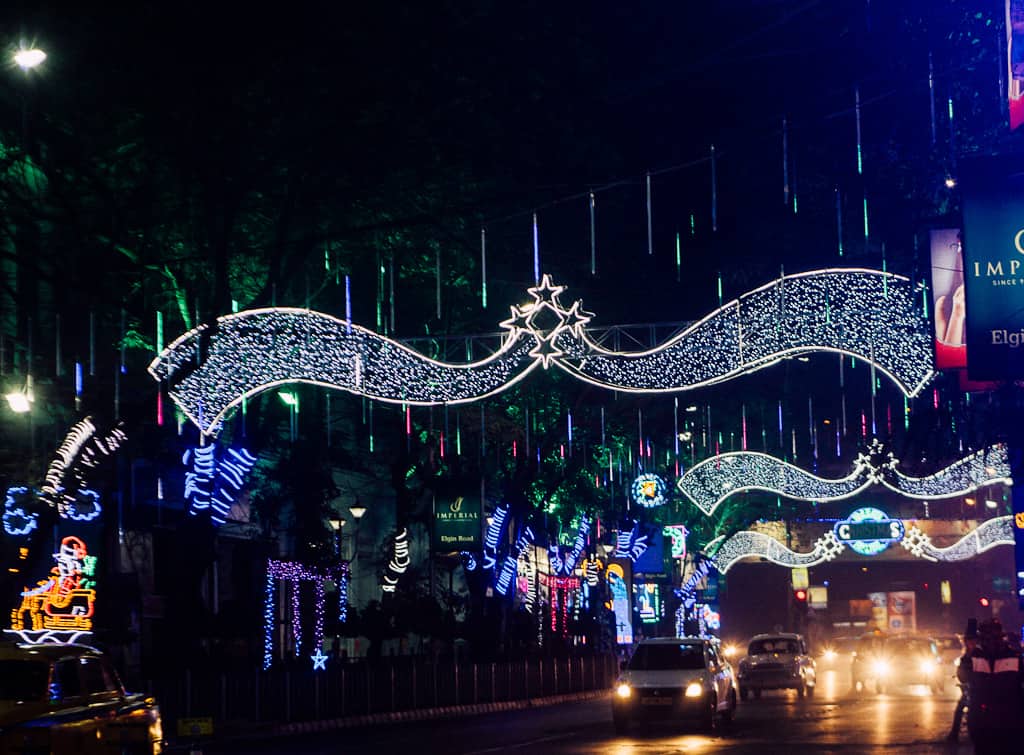 India is a secular country by constitution despite the majority of citizens being Hindu. Although most people are well aware of the magnanimity of the Hindu festivals celebrated in India, not many know that Christmas is observed with equal pomp and show in Kolkata, my birth city and the capital of the eastern state of West Bengal. Winter is the best season to visit the city and it during this time that several festivals are organized which culminate with Christmas and New Year celebrations.

This post was kindly written for us by Paroma Chakravarty from Year of the Monkey.

The countdown begins a whole one week before Dec 25 when Park street, the main commercial street in downtown Kolkata, gets decked with Christmas themed lighted decorations (see photo collage below) and stalls selling fruit cakes, Santa caps and other Christmas goodies line up the pavements. On the actual day of Christmas, mornings start with long lines for brunch at Flury’s, Kolkata’s premier brunch spot/bakery while afternoon sees the crowds pouring in to see the famous Park Street lights, public musical events, mega Christmas fair on the public fair ground and decor.

Revelry and merriment continues till the wee hours of dawn, along with mass at churches and private parties in many homes with Christmas trees big and small. Overall, Christmas is a great time to be in Kolkata and catch a side to this city unknown to many.

The celebrations are super family friendly as lots of parents enjoy the lighting, music and merriment on Park street with their kids but it is not advisable to stay out too late due to drunk revellers descending on the streets from the clubs. If you want to avoid the crowds (and it does get very crowded), snag yourself a Christmas party invite in private clubs or at a friend’s place and enjoy your evening over cake and a good Bengali dinner.

A popular destination, if you are visiting Kolkata is Sikkim.  Part of the Himalayas, the area has a dramatic landscape that includes India’s highest mountain, Kangchenjunga. Sikkim is also home to glaciers, alpine meadows and thousands of varieties of wildflowers.  To get the best from the area, consider a Sikkim Tour Package.