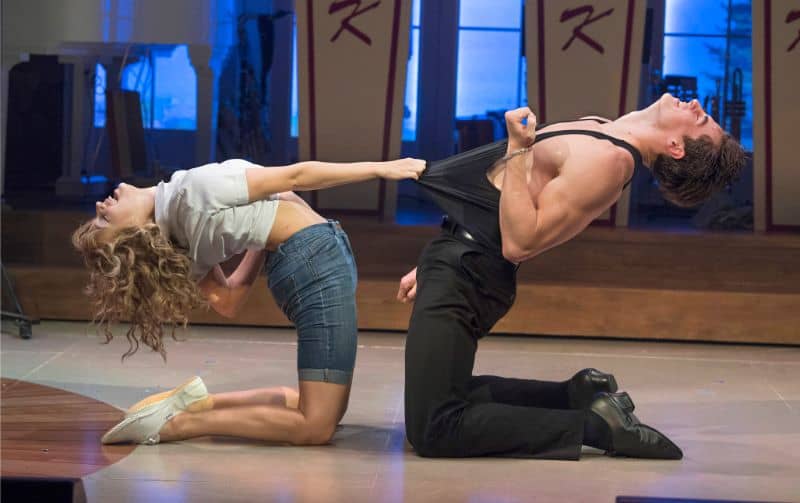 Summer days will soon be over, soonly autumn starts, and tonight our memories whisper softly in our hearts.

On Monday 5th August, Dirty Dancing – The Classic Story on Stage, did the Mambo into Leeds Grand Theatre for the final dates of the 2018/19 tour and I, for one, could not wait to head down there for the time of my life!

Sometimes I find it hard to believe it’s been a whole 32 years since this classic hit the cinemas. More pertinently, it’s been 31 years since my mum took me to the hairdressers to get a ‘Baby’ perm for my birthday. Unfortunately, 9 year old me looked less like Baby Houseman and more like I’d found a plug socket.
It was the 80s, we all made mistakes.

Dirty Dancing has been one of my favourite films since I first saw it. The surface nostalgia of families who love one another enough to holiday at a Butlin’s equivalent -the ideology of innocence. The knowledge your parents have your back mentally and financially, as long as you toe the line of course…

Juxtaposing this the revelation that ‘Them Vs Us’ is rife, education and money will determine how you are judged and where life will take you. Staff quarters where the workers unite, they have only each other to rely on. They have back stories, dark times and some very intimate dance moves.

Dirty Dancing – The Classic Story on Stage features all the much loved characters, original dialogue from the iconic movie and of course, the soundtrack we all fell in love with including Hungry Eyes, Hey! Baby, Do You Love Me? And, of course, The Time of My Life. 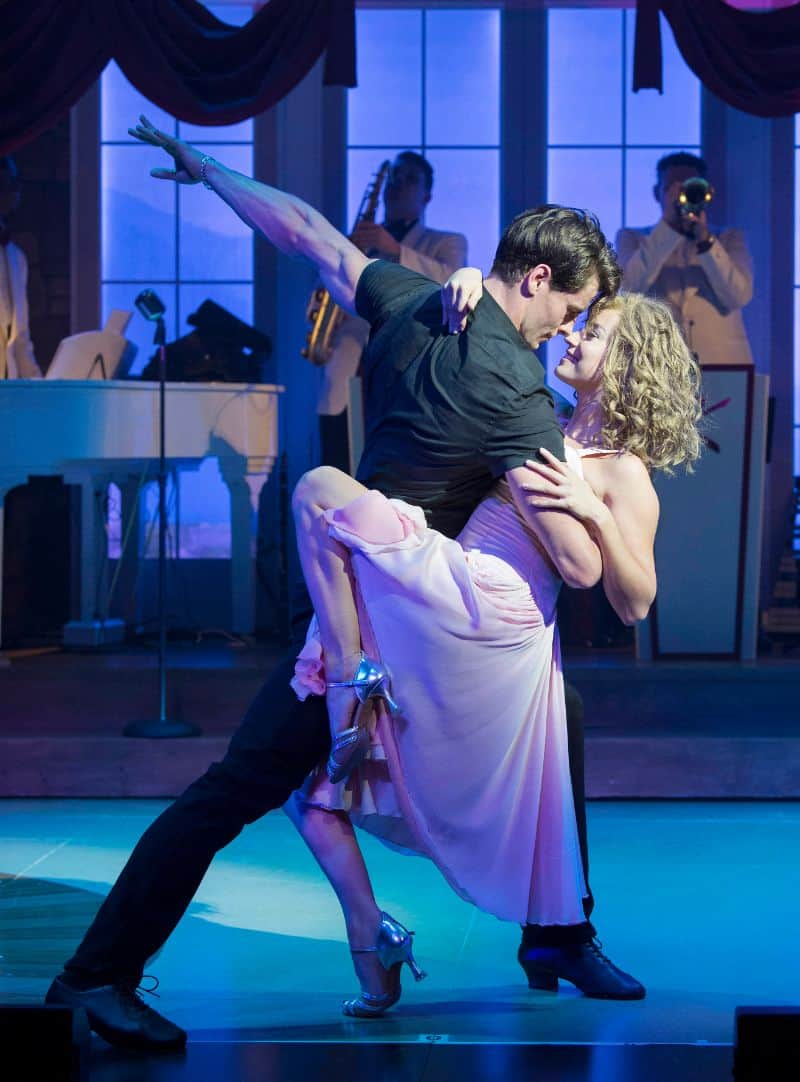 Dirty Dancing at Leeds Grand Theatre would usually star Kira Malou as Baby, Michael O’Reilly as Johnny and Simone Covele as Penny, however our showing saw Katie Eccles and Millie Hood in the roles of Baby and Penny respectively.

It will probably surprise you to know that not everyone has seen Dirty Dancing the movie – I know, I am as shocked as you – and I don’t want to give too much of the story line away. I will say we were successfully transported back to the Summer of 1963 joining Baby as she holidays with her family in the Catskill Mountains. After stumbling across a dance party in the staff quarters, Baby is mesmerised by the raunchy dance moves and pounding rhythms. This innocent, daddies girl desperately wants to be part of that scene, especially once she meets the resort dance instructor, Johnny.

My sister-in-law and I headed to The Grand ready to shake our maracas as we both the love film and we weren’t disappointed. There were a few moments in the first half that felt a little ‘forced’, I put this down to the fact that film is far better at subtle nuance and these moments often have to be ‘exaggerated’ on stage. Had we not known the film inside out, we probably wouldn’t have noticed. 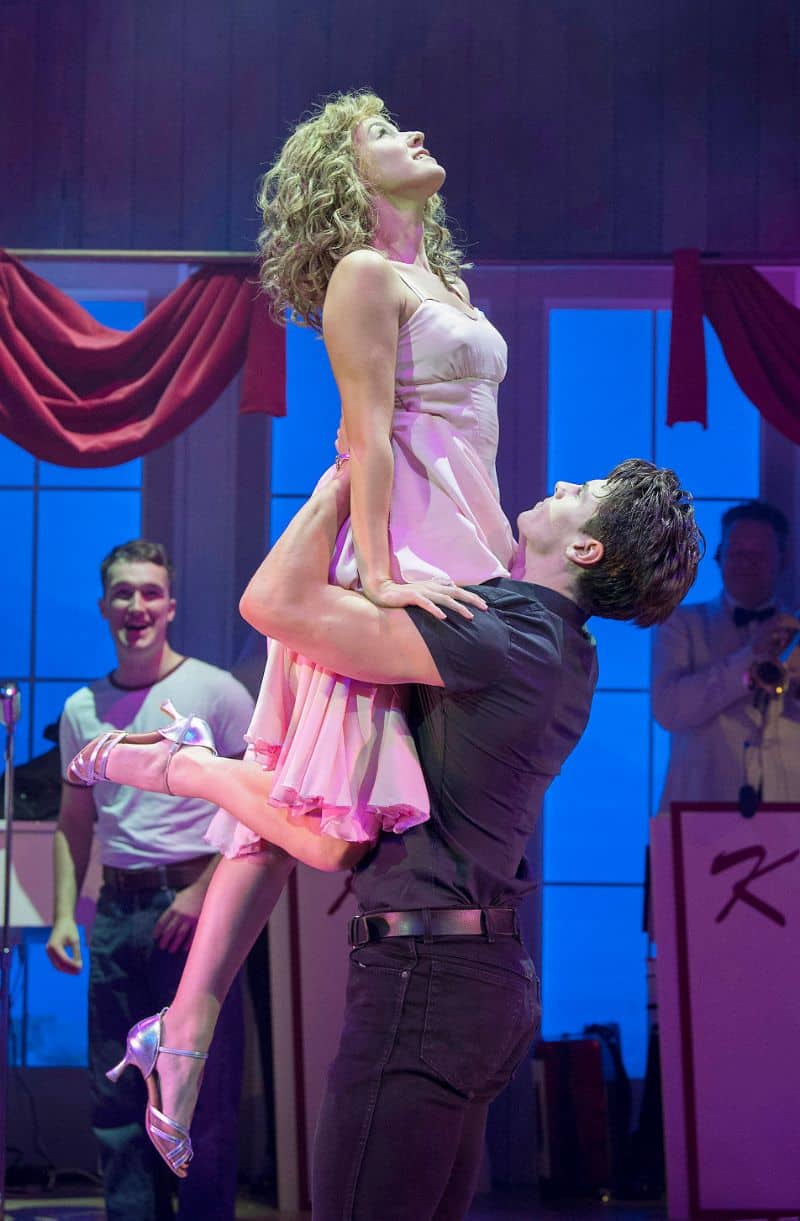 I’ve always favoured Penny and Lisa in the film as I found Baby un-relatable. Last night, in the nicest possible way, I came away feeling the same which shows that all the actors channelled their characters perfectly. It’s worth noting that Michael O’Reilly captures the essence Johnny Castle with the same gruff yet charming attitude that Patrick Swayze did all those years ago.

I loved that the band were on stage as much as possible and the singing, though happening right there in front of us we almost didn’t realise. Tito (Colin Charles) and Elizabeth (Sian Gentle-Green) were both amazing vocally and the duet between Billy (Alex Wheeler) and Elizabeth made me a bit gushy!

Highlights of Dirty Dancing for me were Lisa Houseman’s (played superbly by Lizzie Ottley) Hula routine – absolutely immense and the Cry for Me scene (le sigh) as well as the finale of course.

Dirty Dancing on stage is as foot tapping and romantic as the film, as true coming of age captured beautifully and I would certainly recommend that you ‘join hands and hearts and voices….Voices, hearts and hands’ and get yourself there to catch it before it ends.

Dirty Dancing – The Classic Story on Stage is at Leeds Grand Theatre from Monday 5th to Saturday 17th August 2019. That gives you plenty of time to Cha-Cha-Cha to the online booking at leedsgrandtheatre.com or call the Box Office on 0844  848 2700