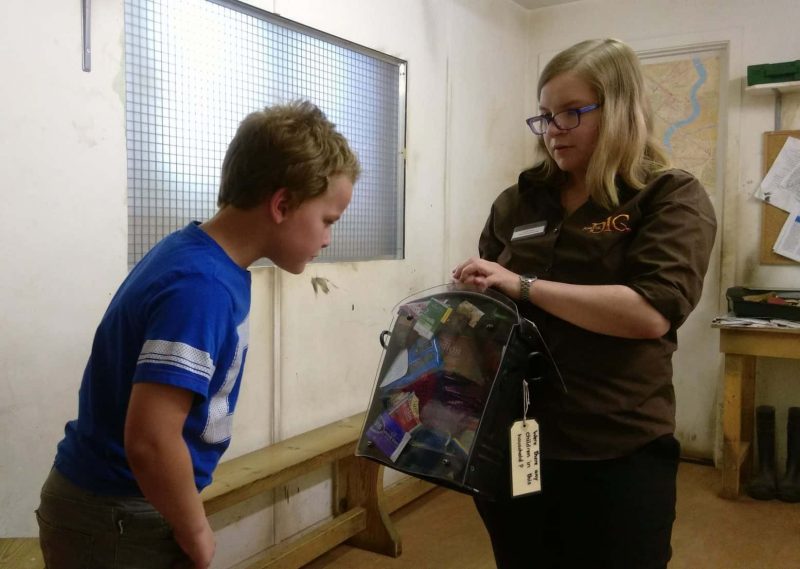 I had a completely proud Mummy moment when we visited Dig in York. The attraction isn’t huge and is built inside an old church. Each visit is completely guided by your own personal guide. We were lucky as we visited quite late in the afternoon and there was only the four of us in our tour group.

So, as we were such a small group we got the guide’s full attention. This was fabulous for Master T as he got to answer all her questions and really made himself the star of the show. He had learned about the Romans and Vikings at school last term and I was so impressed with just how much he had taken in and how confident and thoughtful his answers were. Anyway, I shall stop praising my own children now and discuss Dig!  (But before I do, I must praise our guide who was great – enthusiastic, friendly and knowledgeable)
[singlepic id=326 w= h= float=center]

I wasn’t really sure what to expect so came to it with an open mind. The tour starts in a small room and the guide chatted to us and put the children at their ease. We were then invited to take a trowel each and follow her through to the excavation area. The area is broken down into a series of room floor shapes beginning with a Victorian house. Each floor was covered in small broken rubber pieces that look like earth or mulch.

The guide explained that the room included a living room, a yard and an outside toilet. Master T was digging in the toilet like a shot (a phrase I never expected to use in a review), while Miss H more delicately dug in the living area.

As the children dug up different artefacts (these are shaped or glued into the floor below) the guide then asked the children what they thought they were, based on the shape and the location at which they were found.

The guide then used each artefact as a starting point for discussion. We learned a lot and the experience was really interactive. The children could steer the conversation in the direction of things they were interested in.  After all the rooms had been explored we were taken to a circular bench where lots of genuine artefacts were in trays in front of you. We were invited to handle the artefacts freely and again these opened topics for discussion.

The children naturally steered the discussion onto grim subjects (generally poo related). The guide then produced a simply enormous Viking poo for us to handle and examine. One of Master T’s ‘best day ever’s! I think I see a new career possibility for him brewing!

When the tour was completed we were invited to look at a side exhibit and interactive computers. Miss H had had enough at this point though. Whilst perfectly happy to talk poo, old bones make her uncomfortable.

In a nutshell Dig was a massive hit with our 8 year old boy, but not fluffy enough for our slightly wussy 7 year old girl.

A ticket for a family of four costs £20.

VisitYork kindly provided us with a York Pass in order to visit and review. All opinions are my own and not influenced in any way.