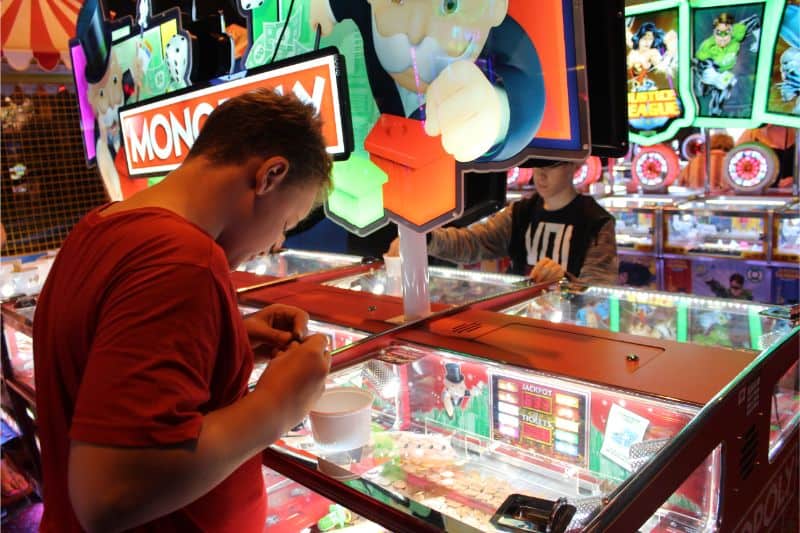 Coral Island Giant Amusement Arcade, Blackpool, Review – Coral Island is a massive pirate themed amusement arcade right on the seafront at Blackpool, and when I say massive, I mean massive!  There is lots going on for the kids in Blackpool, but this was one of our favourites! 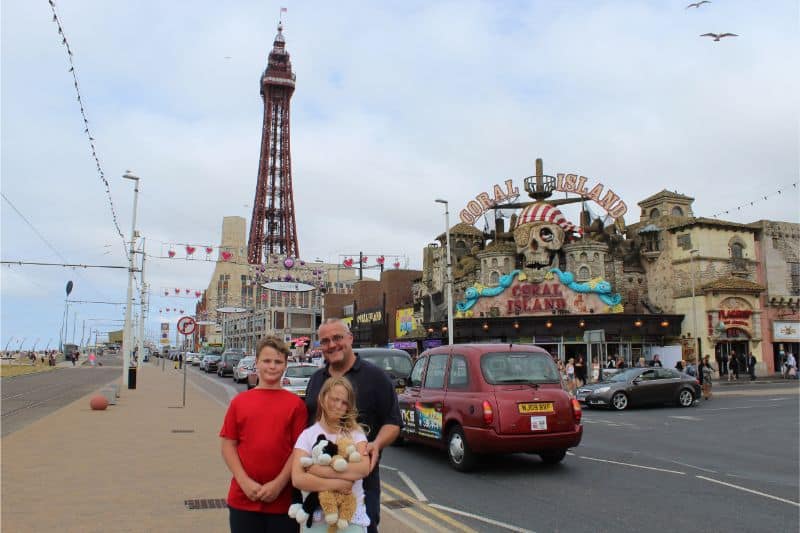 It’s stuffed full of every kind of amusement machine you can think of from motorbikes and racing arcade games, to grabber machines, basketball nets and our family favourite – the 2p machines. 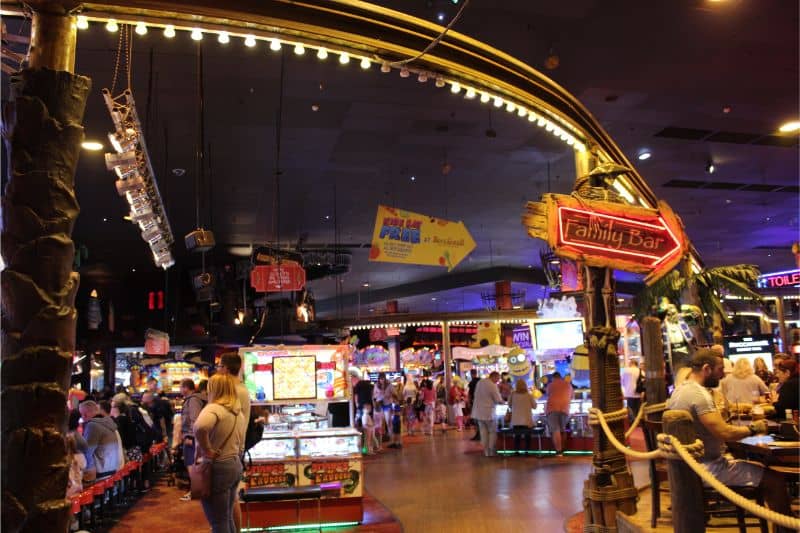 The kids favour the 2p falls where you roll a coin to see if you can knock other coins down, particularly if they have little prizes in there too, oh my goodness do they love to get those little prizes!!

There are fortunately, lots of seats to play the games on, which I gratefully make use of with the free wi-fi while they play! Like all amusement arcades, it’s very, very noisy with machines trilling repeating refrains and the sound of coins dropping onto metal trays. That and the bright flashing lights really lead to sensory overloads but my kids love it and and could stay and play all day. I sympathise though as I was the same at their age and found it completely thrilling! 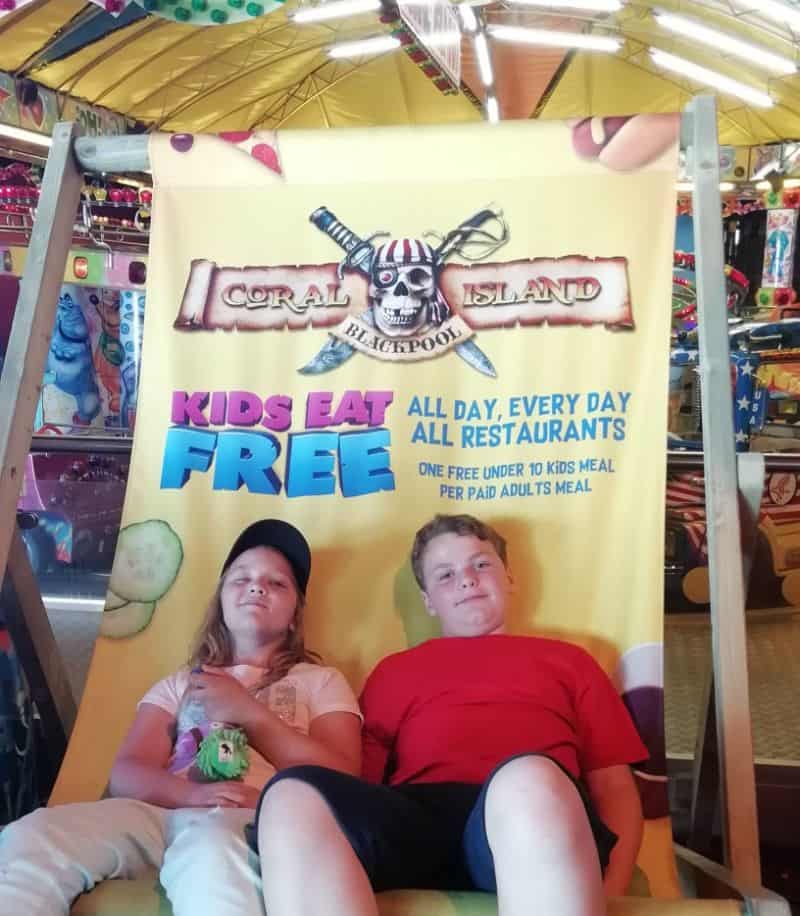 Oh, and the majority of the machines gave out tickets which is clearly nirvana for a nine and eleven year old.  Obviously there is competition about who has won the most tickets, but they loved cashing them in at the end of the day for goodies and soft toys.

It’s not just arcade machines though, they have my favourite game – a Camel Derby – it’s like a Donkey Derby, but with camels.  It’s the one where you have three balls and you roll them up into holes.  Each hole scores an amount of points from 1-3, the more points you can get, the more your camel moves.  The first person to get their camel to the winning line wins a prize!  I think, for possibly the first time in my life, I won a prize!  It made me happier than it should have, but I’ll take it! 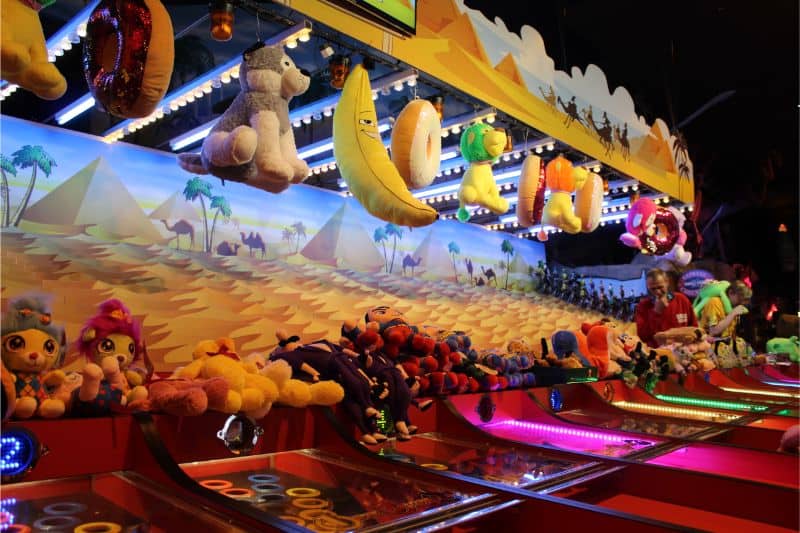 There are also rides within Coral Island like the Ghost Train which I love, but no-one would go on it with me, and the Pirate Flyer which I wish no-one had wanted to go on.  Let me explain – The Pirate Flyer is a ride high above the amusements, where you cruise around in a pirate-ship shaped car on a monorail.  Now, there was a time when I was fearless, when there was no ride I wouldn’t go on – literally I was a complete thrill seeker.  After the kids came along I have been gradually getting more cautious and have developed a bit of a fear of heights.  We all went on the Pirate Flyer, and my nine year old loved it, whereas I was seriously terrified!  Never again!  (But it’s a kids’ ride really!!)

After the Pirate Flyer we headed up to the Family Bingo area – largely because I really needed a sit down!  It was very high tech and not like it used to be with little doors on the cards that you closed.  Coral Island’s family bingo is all sleek touch screens – very fancy! 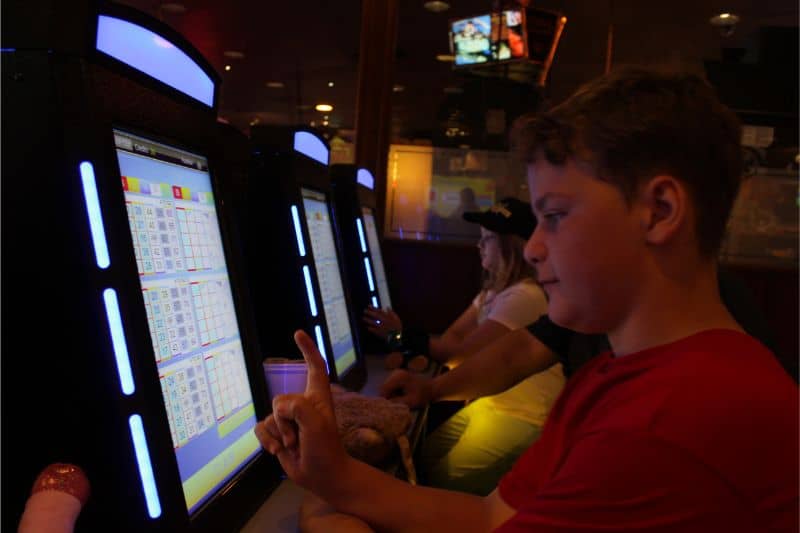 The Buccaneer at Coral Island, Blackpool

Finally we decided to stop for lunch in The Buccaneer family bar and restaurant within Coral Island. 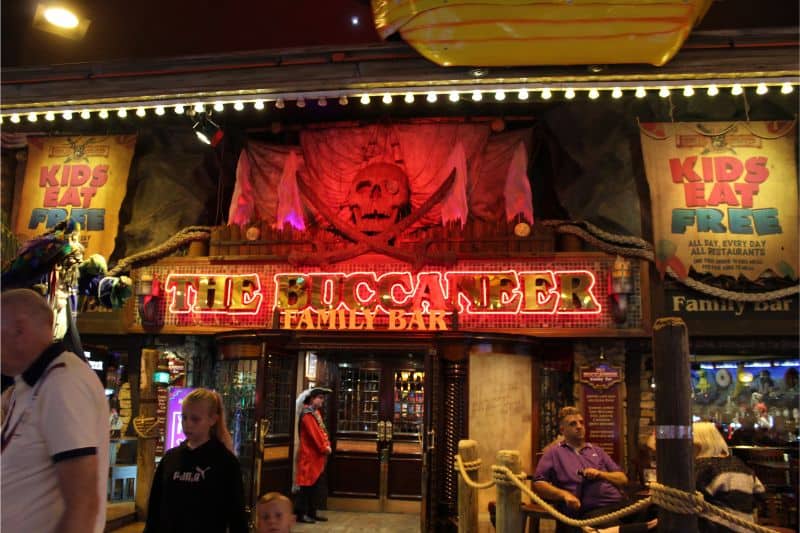 It’s a great family pub with lots of space and very relaxing after all the amusements noise.  Food prices are very good – for example a lasagne is around £8 and most importantly, kids eat free with a paying adult, so that makes a big difference to the end bill!  We started off by sharing a couple of starters and went for loaded nachos: 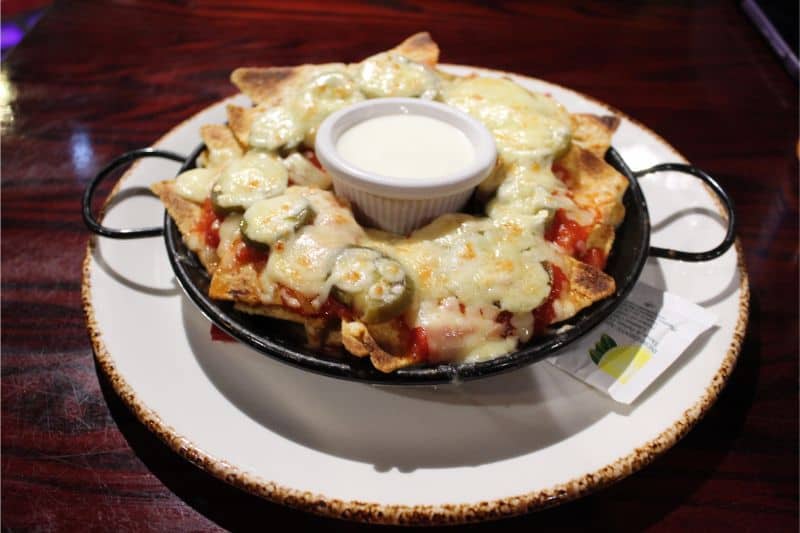 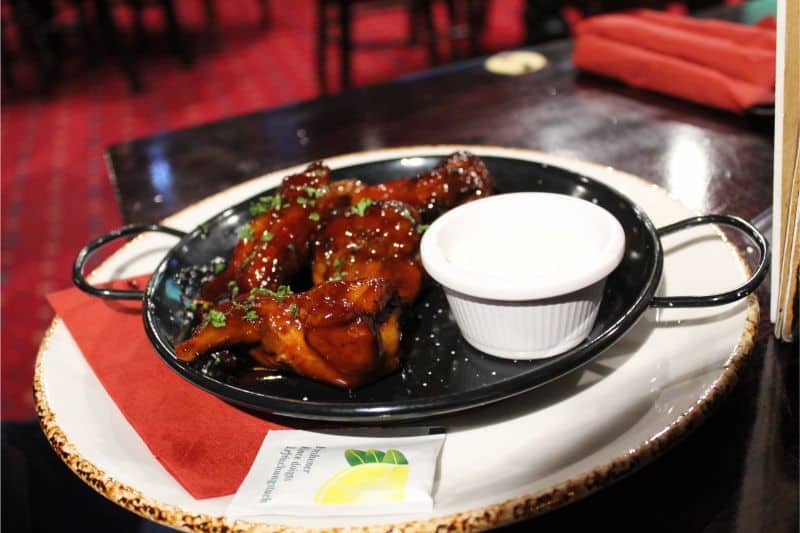 then the kids went for fish fingers and chips, 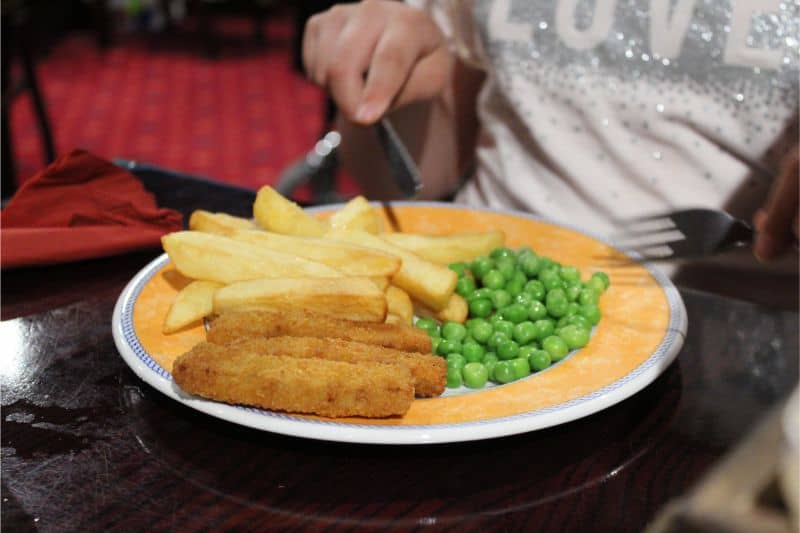 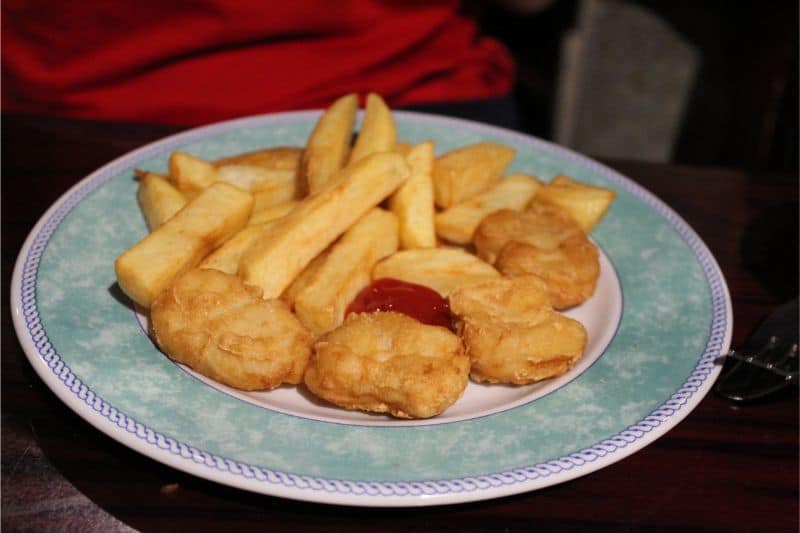 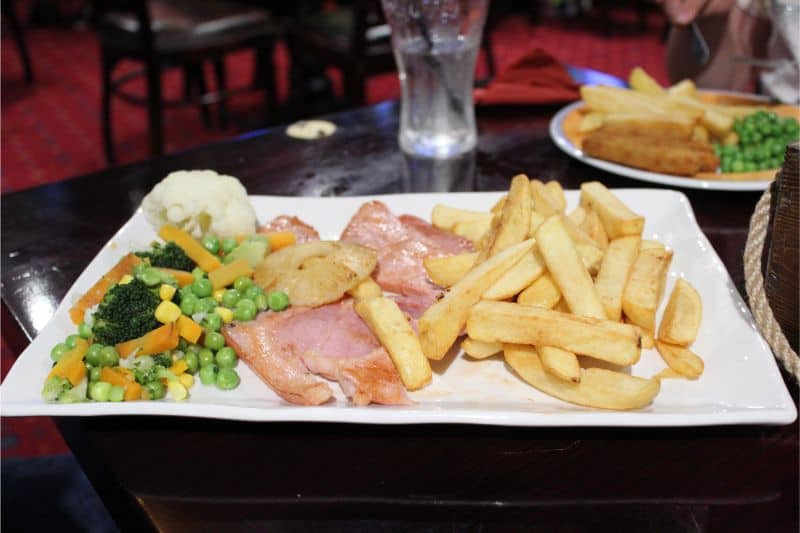 and I had the sirloin steak: 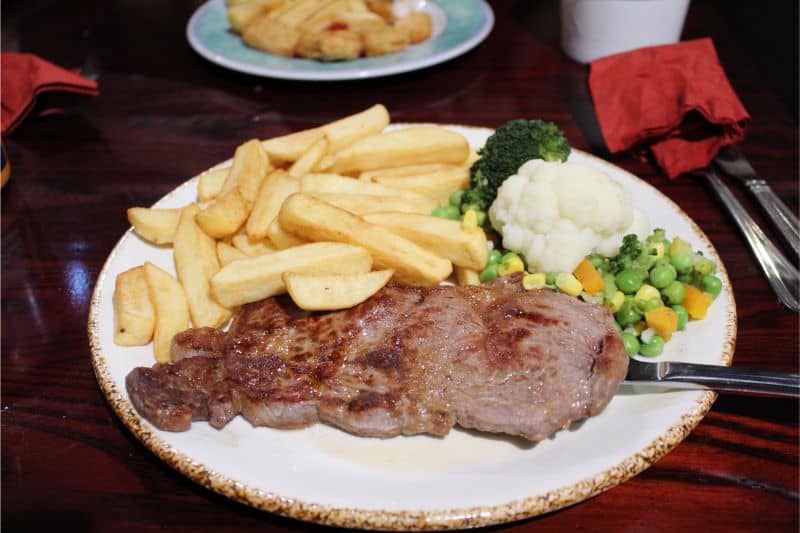 Finally Miss H and her dad went for cheesecake: 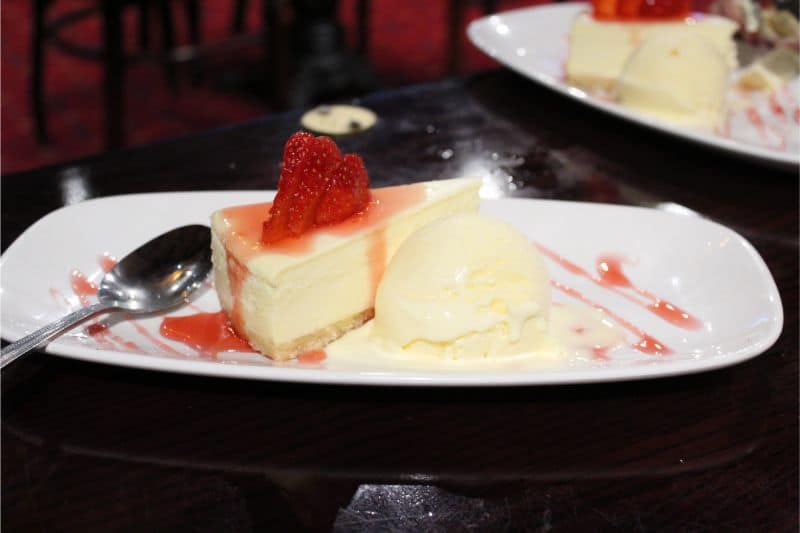 While Master T and I shared this simply enormous Sundae! 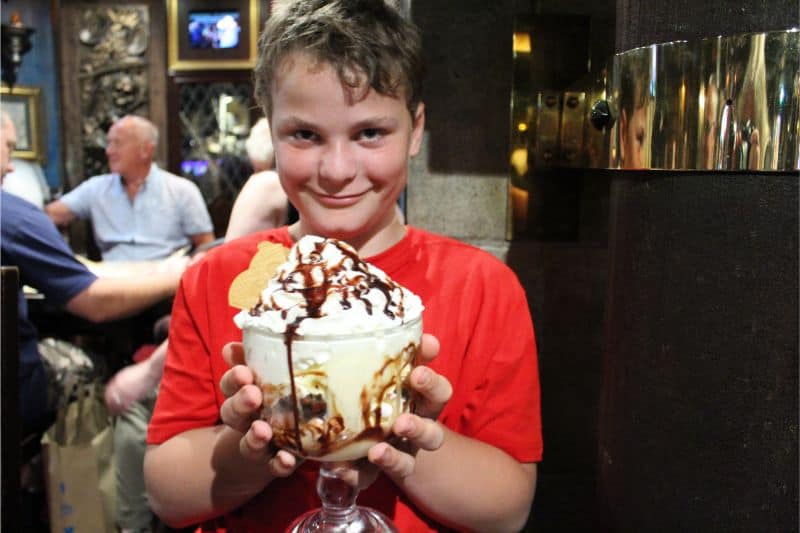 Our kids love the amusements and were thrilled that we got to go and review Coral Island.  It’s a real destination amusement arcade as it has so much going on.  The Buccaneer is also a great place to go for a good value sit down meal and a relax.  While we were there ‘Captain Jack’ visited all the tables causing laughter and chaos wherever he went as well as handing out little toys to the kids.  Great fun and recommended! 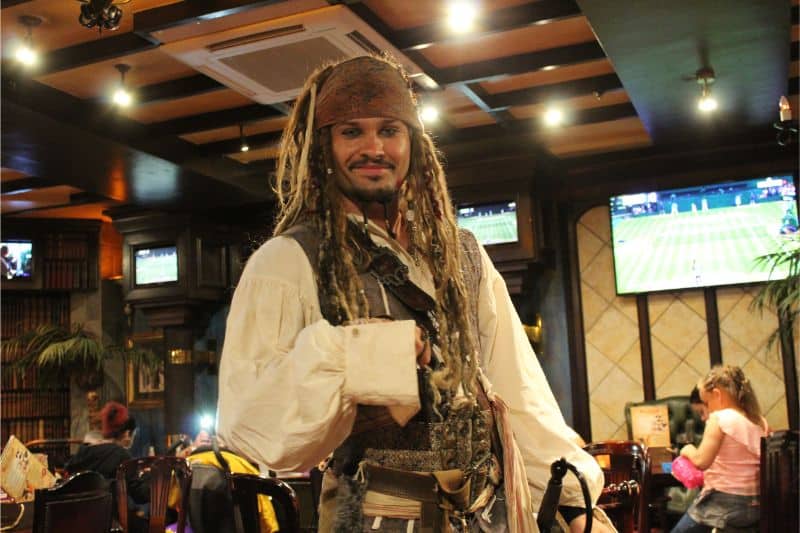 Coral Island invited us to come and review but as always all opinions expressed are my own.

If you are looking for somewhere to stay in Blackpool, have a look at our suggestion for family hotels in Blackpool or our review of The Imperial Hotel. We also visited The Sandcastle Waterpark and ate at The Wok Inn during our trip.