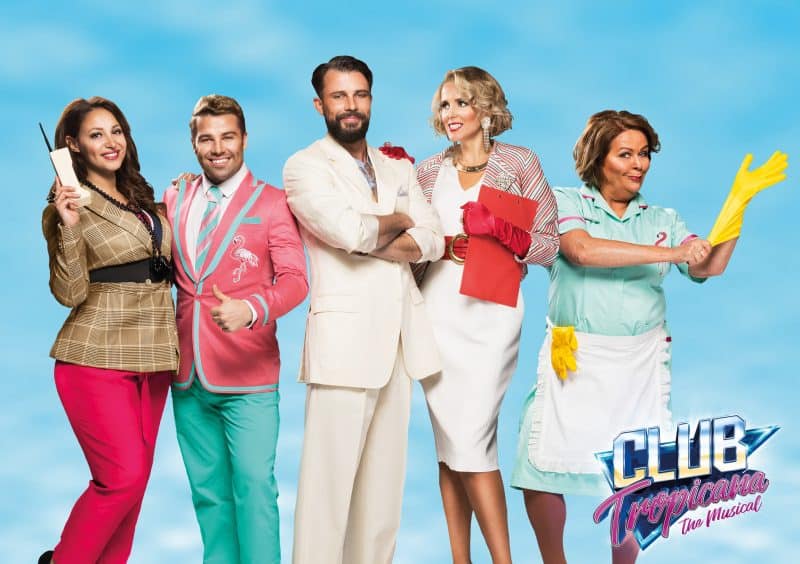 Club Tropicana The Musical is on at The Grand Opera House, York from Monday the 18th to Saturday the 23rd of March 2019.  We went to see it last night and it was brilliant!  Set in the 80’s in a hotel in Spain, a bride calls off her wedding and jets off on the honeymoon with her friends, not knowing that her hubby-to-be is doing the same with his friends.

With bright 80’s costumes and big 80’s hair the cast were all brilliantly funny.  Joe McElderry was sparkling in his role of Hotel Entertainment Manager Garry, and along with Kate Robbins played a great comic role.  The singing and the dancing was on top form and of course the musical score was wonderfully nostalgic with some great cheesy pop songs (as well as my favourite ‘Take on Me’ by a-ha – I had such a crush on Morten Harket back in the day!

Part farce, part musical but completely brilliant, it’s a total feel-good fest – take the girls and go and have a good time (after all Girls’ Just Wanna Have Fun!)

It takes a fun-packed trip back in time to the electric 80’s when hair was big, shoulders were padded, girls (and boys) just wanted to have fun and mobile phones were shaped like bricks and weighed a tonne!  When our budding bride and groom get cold feet, they decide to jet off separately to sunnier climes and feel the heat – but little do they know they’ve checked into the same hotel… the vibrant Club Tropicana! With drinks flowing and tans glowing, will our young lovers decide to finally go through with the wedding? Will hotel inspectors get their way and close the resort, or will the staff save the day?

All will be revealed in hilarious style, to an irresistible soundtrack of some of the most iconic, chart-topping pop anthems of the decade all performed live on stage, including: The Look of Love (made famous by ABC), Bucks Fizz’s Making Your Mind Up, Frankie Goes to Hollywood’s 1983 debut hit, Relax, Tight Fit’s Fantasy Island, a-ha’s Take On Me, Culture Club’s Church of the Poison Mind, Up Where We Belong, made famous by Joe Cocker and Jennifer Warnes, and many, many more!

Welcome to Club Tropicana, the 1980’s answer to Love Island. The drinks are free and the whole family are invited to join the ultimate holiday musical, celebrating everything we loved about the 80’s, a decade when girls (and boys) just wanted to have fun.

Producer Mark Goucher said: “What a time the 80’s were: great dancing, great bands, great music, funny clothes… but mostly really bad hair! But I look back with such happiness remembering going to gigs for the first time. Club Tropicana The Musical is a celebration of the 80’s with a lorra lorra laughs!”