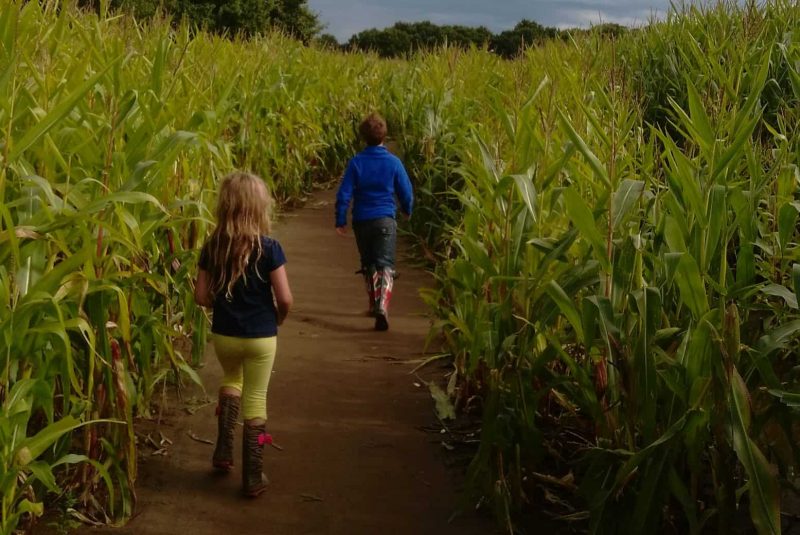 York Maze 2018 – We are big fans of York Maze and visit every year. We like to go carve pumpkins at Halloween too – never Hallowscream though (their scary night time fright fest) as I would have kittens!

Plan for a full day out as there’s lots to do. The first thing we always do as it’s right by the entrance, is the sand pit play park. It’s lots of fun play and climbing equipment set in a huge sand pit. There is water play there too, so bear this in mind if you don’t want them wet and sandy the whole day.

From there we usually move on to the bouncy pillows, followed by the Mineshaft Maze. I think the Mineshaft Maze is brilliant. It’s on two levels and gets them scampering around in tunnels below you. Think hamster play for kids. If it’s rained recently, expect them to come out with muddy knees.

When the children have had their fill of scurrying, they hare over to the corn snake slides. These slides have also become a firm favourite. There are four slides in all. A smaller one for the littlies can be found at the side. The other three are all at an equal starting height, but are different styles. One is much more of an initial drop and is faster than the other two. I’ll let you find out which is which for yourselves…

Best Burger Award in an Attraction

Usually at this point the delicious scents of chargrilling burgers overcomes us and we hotfoot it to the burger place.   Some attractions do food better than others, York Maze gets our Yorkshire Wonders award for the best burger without a doubt. Often I suggest taking a picnic, but not to the York Maze. (Piglets Farm Park come a close second in the burger stakes, for you burger lovers).

When we had finished our burgers Miss H made a ‘burger box friend’ and insisted I carry it for the rest of the day and then take it home with us.  I did.  She has never mentioned it since, so the inconvenience of carrying a greasy and fragile burger box around all day was really worth it…

York Maze also has a coffee shop and cafe that do sandwiches and cakes, as well as a further coffee shop near the Crowmania ride.

Speaking of the Crowmania ride, don’t miss it!! It’s essentially a tractor ride through fields but it’s great fun. You have a guide who stands at the front of the tractor and tells you a story as you progress through the field. It’s great entertainment and there is lots of audience participation. It’s like panto on a tractor and you WILL get wet. The ride has been updated this year and featured simply enormous tractor carriages. Master T was very impressed.

There are two other activities running throughout the day. There’s pig racing, which we didn’t get time to see and the Crowbot show which we did get chance to see and wished we hadn’t! If you want to do it, make sure you get there early so you gave a seat. Worst case scenario is that you have a nice sit down at least. If you are pushed for time, then avoid.

In the absence of good Crowbot photos, enjoy this one from the back of the ladies toilet door instead:

While I am on the subject of areas in York Maze to avoid, I would not bother with the crazy golf! There are so many fab things to do at York Maze, you are going to struggle to fit everything in anyway, so try and give the golf a miss. My two always insist on doing it. It takes ages as there is always a massive group in front of us (do they see me coming and wait in ambush then leap in front of me?!) And the course is pretty basic anyway.

The Maze of Illusions is definitely worth doing. My two love the Cobstacle course. It’s a huge inflatable obstacle course that two people race down at the same time to see who is fastest. My tip would be to leave this activity till later in the day when it has quietened down. Although the line may not look long, due to the nature of the course (only two at a time) you can be waiting a long time.

I am afraid I am now going to confess something rather shocking. Prepare yourself. I am afraid I don’t go into the actual maze! I know, I know. Hubby takes the kids in and I go and have a sit down with a coffee. It’s lovely!  Here are some photos Mr Wonders took of the two little Wonders in the maze.  You can imagine how much Master T loved being stuck in the mud, and how filthy they were afterwards 🙂

One last part of the maze I must mention is the House of Cornfusion. It’s another one you shouldn’t miss, and another I would recommend doing early or late on when it is quieter. There are lots of fun optical illusions in there. Watch out for upside down rooms, shrinking corridors, and one of those odd spinning tunnel bridges. (I have no idea what this is called but it’s fab).

As is often customary you will need to pass through the gift shop on the way out. It’s my favourite one of all the attractions though and has some great home decoration items.

All in all, an excellent day out.

York Maze is open during the school summer holidays, than again over the October half term for Halloween and Hallowscream.

VisitYork kindly provided us with a York Pass in order to visit and review. All opinions are my own and not influenced in any way.

Quirky, Fun and Fabulous Day Out at Stockeld Park

I would love it if you would pin this on Pinterest: