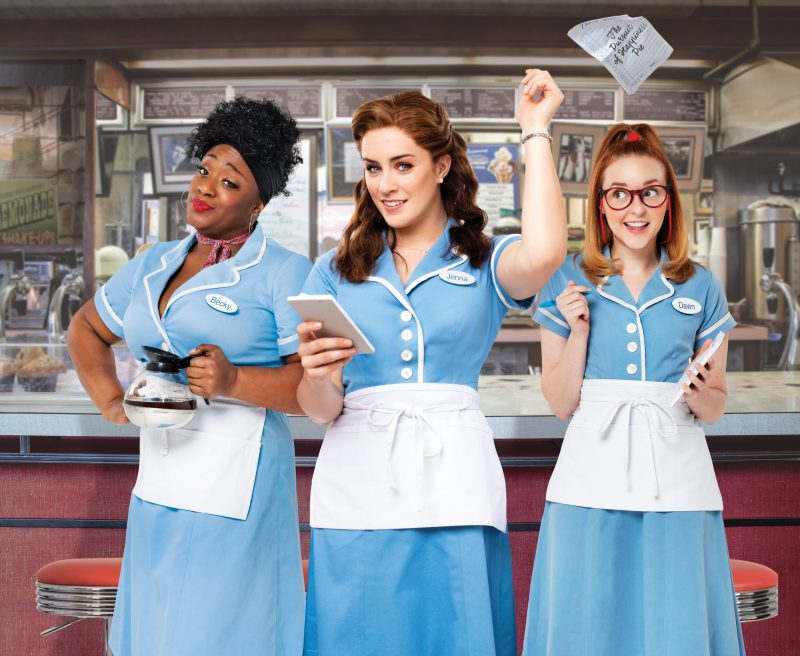 Last night we saw Waitress The Musical at Leeds Grand Theatre.  It’s the story of three women who work as waitresses in Joe’s Pie Diner.  We follow their stories and their hopes and desires via scenes with humour, sass and – often – emotion.  The women support each other through difficult times as Jenna navigates a difficult marriage as well as a complicated relationship with her gynaecologist (played by Matt Willis from Busted).

It was a real tonic to watch, the characters were funny and endearing.  It’s a great score with some cracking songs.  My advice, if you are not familiar with the musical, is to listen to the score a couple of times before you go.  I always feel you get so much more from a musical when the songs are familiar.  (If you have Alexa, ask her, she will play them for you! Sugar, Butter, Flour.)  The songs have been going round in my head all day today!

Waitress has some great characters, fab songs and a feel-good satisfying ending.  I can’t tell you how nice it was to get back to live theatre, and I could tell that much of the audience felt the same way.  I definitely saw some tears at the end, whilst the audience gave the cast a standing ovation.   A fantastic welcome back to theatre!

Brought to life by a ground-breaking, female-led creative team, this ‘warm, witty, wise and hilarious’ (EXPRESS) hit features ‘one of the best scores in years’ (STAGE) by the Grammy Award-winning Sara Bareilles (Love Song, Brave) a book by acclaimed screenwriter Jessie Nelson (I Am Sam) and direction by Tony Award-winner Diane Paulus (Pippin, Finding Neverland).

Premise: Meet Jenna, a waitress and expert pie-maker who dreams of some happiness in her life. When a hot new doctor arrives in town, life gets complicated. With the support of her workmates Becky and Dawn, Jenna overcomes the challenges she faces and finds that laughter, love, and friendship can provide the perfect recipe for happiness.

We were invited to the press night of Waitress.  As always, all opinions are my own.