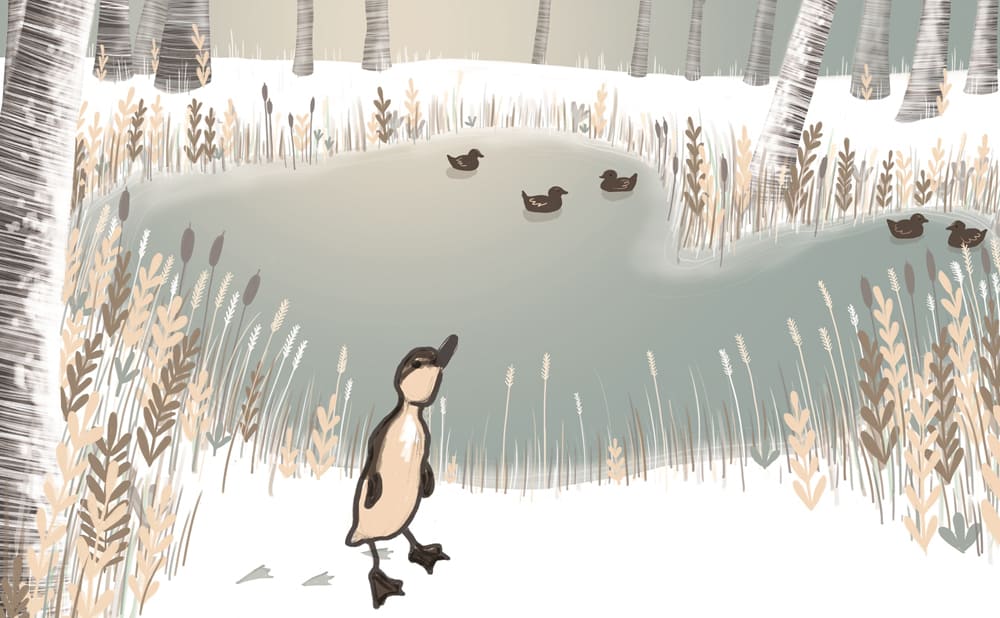 We recently saw ‘Ugly Duckling’ at the York Theatre Royal. The play was in The Studio in the theatre. If you have not been before, it’s not in the main part of the theatre, it’s a smaller stage in the centre of the room. To three sides, there are rows of seating – just three rows high. It makes for a really intimate and intense experience as you are really up close with the actors. It’s perfect for children’s performances as it’s so much less intimidating for them than a big theatre and you are really immersed in the action.

It was a tutti frutti production which is always a guarantee that it’s going to be good! I have seen several plays by tutti frutti both with my children and before when I used to take my nieces when they were little. We saw ‘The Boy Who Cried Wolf’ a couple of years ago and one of the expressions (the sheep calling the boy ‘baaaad boy’) is commonly used now in our family – that’s how memorable the plays are!

Anyway, back to Ugly Duckling – it was brilliant as always. My children were the oldest there at 8 and 10, and I was a bit worried they might find it too young. They didn’t though and Master T was laughing right from the start. The set was simple but beautiful, and the changes were really clever and effective, particularly the changing of the seasons.

The play uses music, puppetry and dance (pretty impressive high energy dance at times too) to make the story come alive. The children were entranced from when it began to when it ended. I have the ultimate respect for the actors being so high energy and so in character for such a long space of time. They were in the audience chatting to the children as we were being seated, before the performance too.

Read more about Ugly Duckling below – but go and see it if you can (and any future tutti frutti performances too!)

For children aged 3+ and their families

Fresh from the critical acclaim for last year’s co-production of Underneath A Magical Moon, the highly-praised Leeds company tutti frutti and York Theatre Royal have teamed up again to stage a new adaptation by Olivier Award-nominated Emma Reeves of Hans Christian Andersen’s much-loved tale the Ugly Duckling.

The new adaptation runs at York Theatre Royal from 28 September to 14 October before touring until February 2018.

In their nest at the edge of a pond, the baby ducklings wait impatiently for Mummy’s enormous egg to hatch. But their new brother doesn’t look like everyone else. He doesn’t even quack like a proper duckling!

Teased and called Ugly by his silbings, our hero goes on an adventure in search of a place to fit in. As the woodland trees change from dark weathered branches to silver sticks of frost, the lost and lonely fledgling hides in brushwood and stares skyward at the migrating swans, yearning to belong and marvelling at their beauty. Where does he really belong?

Moving through all four seasons, tutti frutti and York Theatre Royal bring to life Hans Christian Andersen’s well-known tale. With a menagerie of mischievous animals, depicted through inventive physicality, and live music that quacks and trills, this charming production plays with the importance of identity, self-worth and takes us on a journey to discover inner beauty.

In 2014 playwright Emma Reeves adapted Jacqueline Wilson’s Hetty Feather for the stage and was subsequently nominated in the Best Entertainment & Family category at the 2015 Olivier Awards. Emma has also written some episodes for the forthcoming television version of Hetty Feather. Her other stage adaptations include Carrie’s War, Little Women, Anne of Green Gables and Cool Hand Luke. She co-created and wrote the hit CBBC series Eve. Other TV credits include The Dumping Ground, Tracy Beaker Returns, Young Dracula and Sadie J. In 2016 Emma won for Best Children’s TV Episode for Eve: Final Episode – Control, Alter, Delete.

Playwright Emma Reeves said about the new adaptation:
“Ugly Duckling is a classic story about families, identity and finding your place in the world. It’s funny, sometimes sad sometimes but ultimately uplifting. It’s great to be working with tutti frutti again, exploring such a timeless and joyful story.”

Following the York run, Ugly Duckling tours the UK until the end of the year, then tours to The Kids Fest in Hong Kong and Singapore.

tutti frutti are a national touring company creating high quality work for children and their families to enjoy. Based in Leeds, tutti frutti has been delighting children aged 3 and over for more than 20 years and tour nationally and internationally to schools, venues, arts centres and village halls. Previous co-productions with York Theatre Royal have included The Princess and the Pea, Rapunzel, Monday’s Child and Snow Child. In 2017, the company’s work was showcased at the prestigious IPAY International Performing Arts for Youth Showcase in North America.

York Theatre Royal has brought delight and fulfilment to the people of York and beyond by offering a rich and diverse programme of creative activity for 270 years. York Theatre Royal is one of the UK’s leading creative producers and presenters, constantly building on its reputation for producing high quality and ambitious theatre with highly regarded productions of new commissions, revivals at all scales and each year delivering a pantomime of international renown. The theatre serves audiences of all ages – children, youth, teenagers, adults and seniors. The autumn/winter 2017 season includes fresh adaptations of Pride and Prejudice and Brighton Rock, family shows Ugly Duckling and E Nesbit’s The Book of Dragons, and TakeOver Festival 2017, in which 12-26 year olds take over the programming, producing and marketing of the theatre. Berwick Kaler returns as the nation’s longest running consecutive pantomime dame in Jack and the Beanstalk at Christmas.

Looking for reviews of other plays for children at the Theatre Royal York?  Here is our review of Robin Hood, the Arrow of Destiny.

We were invited to attend the performance, but as ever, the opinions expressed are my own.