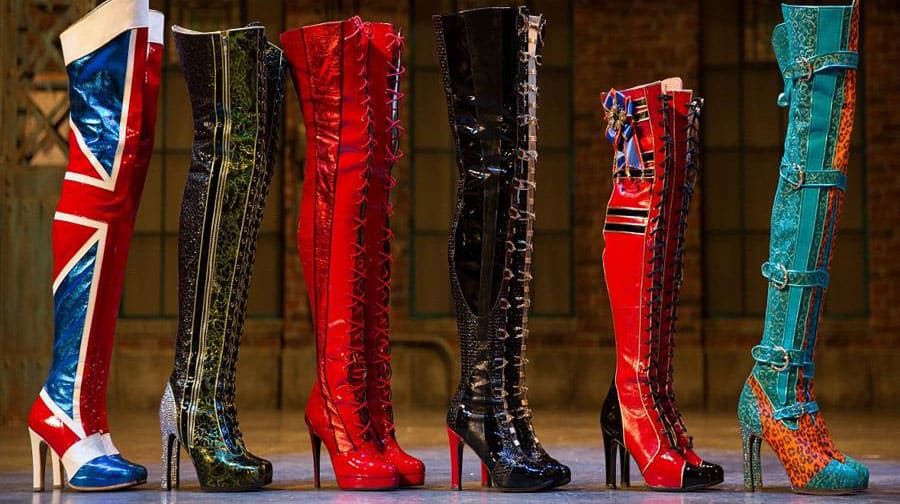 Every so often I get chance to go down to London, visit a good value pub, have a meal, a girly natter and see a show.  On my last trip I managed to visit the Adelphi theatre to see the London musical Kinky Boots. I was a bit worried as I didn’t know any of the songs in the show, and I quite a like a good sing-a-long (in my head you understand, I’m not that extraverted!). As it was, it didn’t matter in the slightest as the show was just such great fun!  Written by the karaoke classic queen herself – Cyndi Lauper (Girls Just Wanna Have Fun!)

The majority of the action is set in a traditional shoe factory in Northampton. When the owner dies his reluctant son takes over the dated and failing family business and prepares to close it down.  Hope comes from a chance meeting with an improbable source, the flamboyant and fabulous drag queen, Lola.

“Hand me glitter, feathers and a hot glue gun and I can make the world a pretty place.”

From there we follow the unlikely friendship and the transformation of the factory from selling traditional men’s shoes to magnificent kinky boots.  The set was a quirky mix of the everyday factory juxtaposed with the glittering besequinned world of the drag queen. Fabulous darling!

I thoroughly enjoyed it.  Poignant at times, it’s a funny, feel good musical, filled with pithy one liners and laugh out loud jokes that will let you leave the theatre feeling happy.   And that, in my opinion is one of the best accolades you can get!

Kinky Boots is currently being performed at the Adelphi Theatre in London.

While I am talking boots, have a look at my reviews for wide fit wellies and wide calf boots.