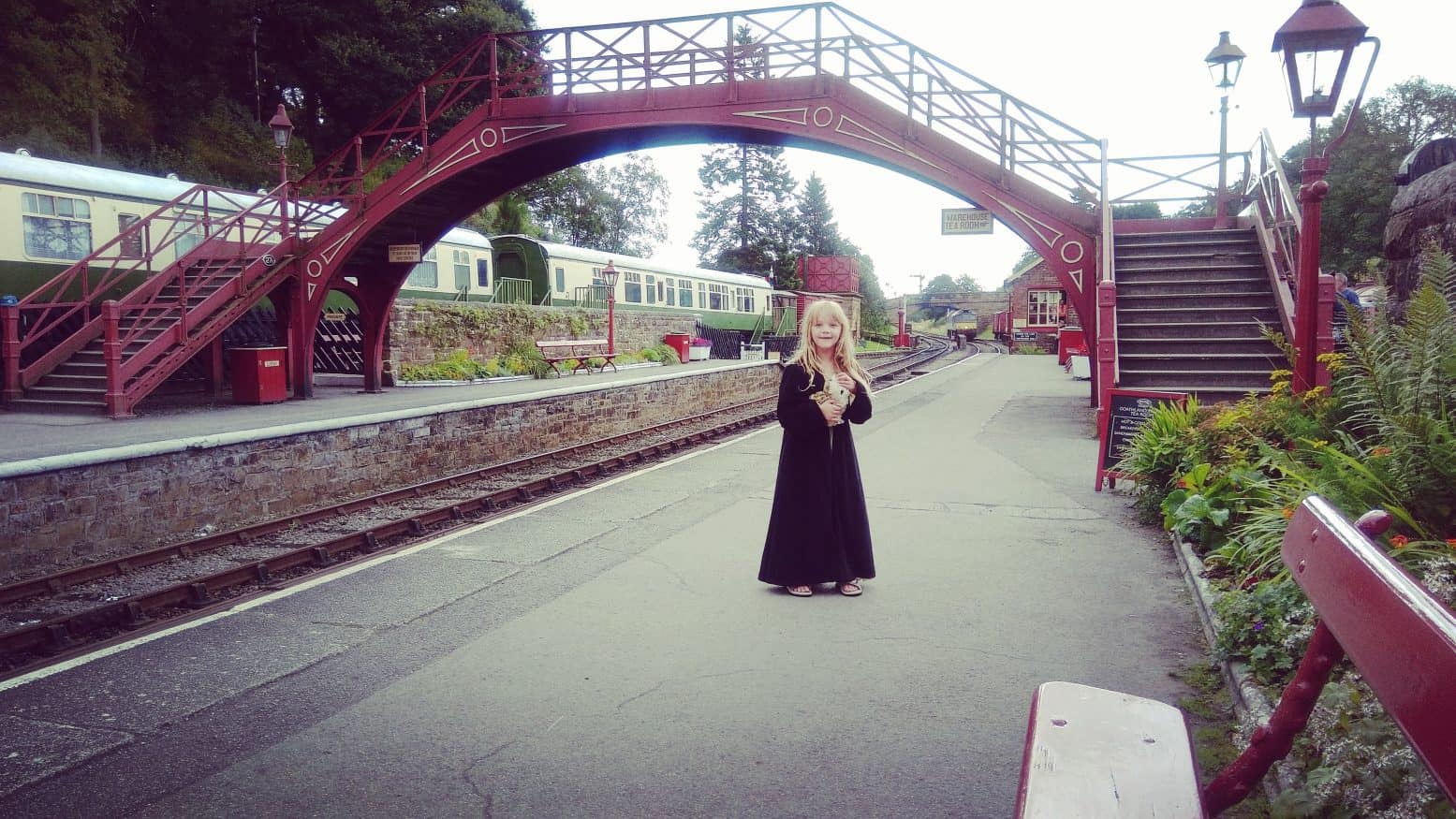 North Yorkshire Moors Railway (NYMR) – So September has blown in and the leaves are beginning to take on their Autumnal hue. What better way to welcome the season of mists and mellow fruitfulness than taking the Hogwarts Express to Hogsmeade Station? (Otherwise known as taking a trip on the heritage steam engine on the North York Moors Railway (NYMR) to Goathland).  Do also have a look at this 3D “Eric Treacy” steam locomotive taken at Goathland for a good look around!

We started our adventure on the North Yorks railway at Pickering which is a picturesque market town and the scene of a lovely weekend Mr Wonders and I spend before the children came along *sighs nostalgically at the memory of lazy days and sleep ins*. The station at Pickering is very pretty and is themed as it would have been in the 1930’s. It really sets the stage for your journey ahead. The station was recently used in the 2016 film ‘Dad’s Army’. 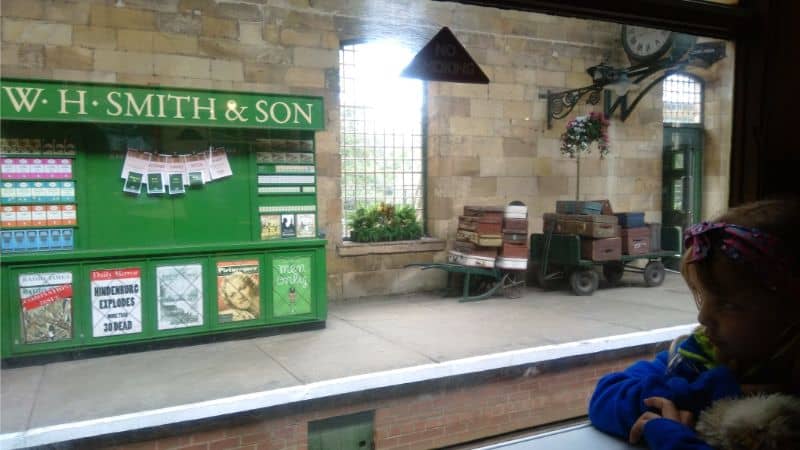 So, with children firmly clutched in hand (the station made me think of lost little evacuees with labels around their necks) we boarded the train.  The carriages are beautifully evocative and are all painstakingly restored.

The NYMR train stops at Levisham, Newtondale Halt, Goathland, Grosmont and Whitby. We are big Harry Potter fans and so it was Goathland we headed for. Goathland Station was used as Hogsmeade Station in the very first Harry Potter film. Miss H took her wand and owl and wore her finest Hogswarts robes for the occasion while Master T sported his ‘Platform 9 and ¾’ t-shirt (though as we all know this is located at Kings Cross, but you understand the sentiment).  If you are looking for other Harry Potter filming locations, have a look at this review of the Watercress Line in Hampshire. 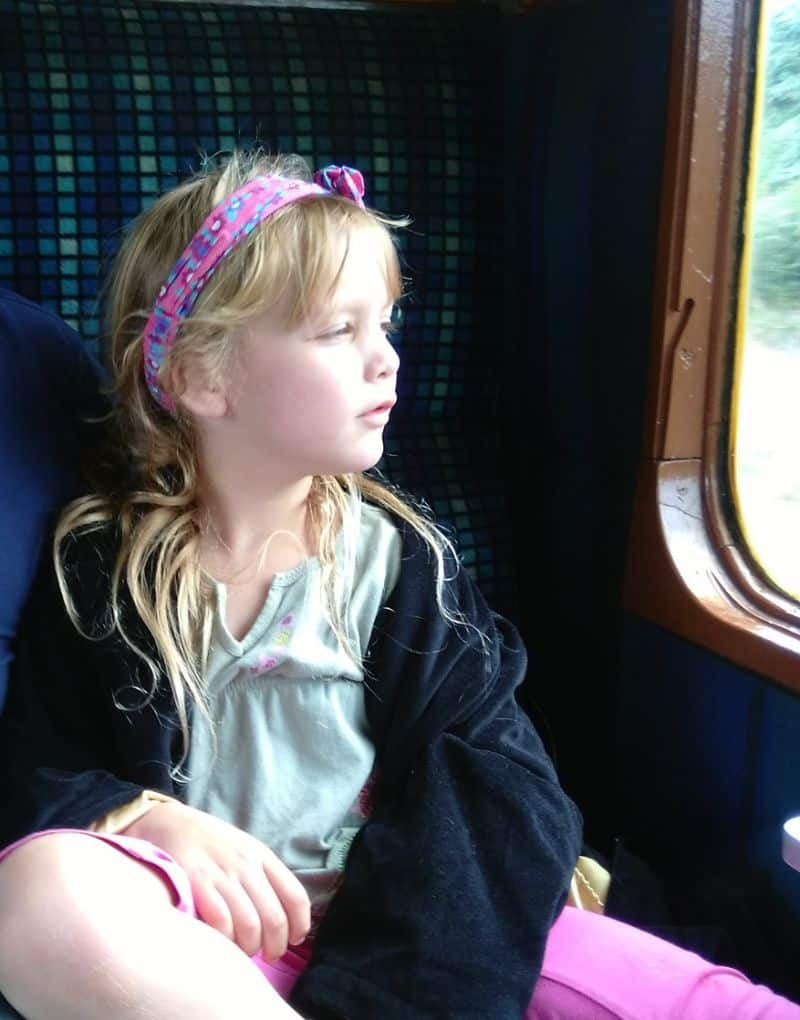 Before becoming famous for ‘the boy who lived’, Goathland was already a famous station and village for the setting of the TV programme Heartbeat. Many a villain has been chased over the famous footbridge. 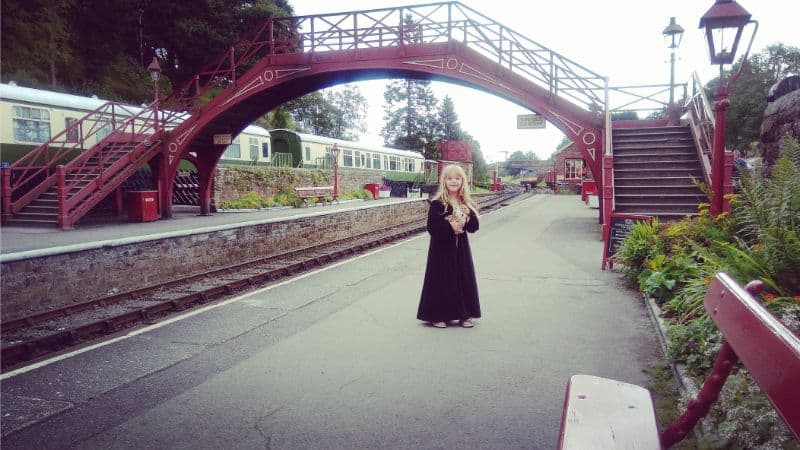 A short wander up from the station and you’ll find yourself in Goathland itself. Here we stopped and visited The Goathland Hotel, known as The Aidensfield Arms in the series. 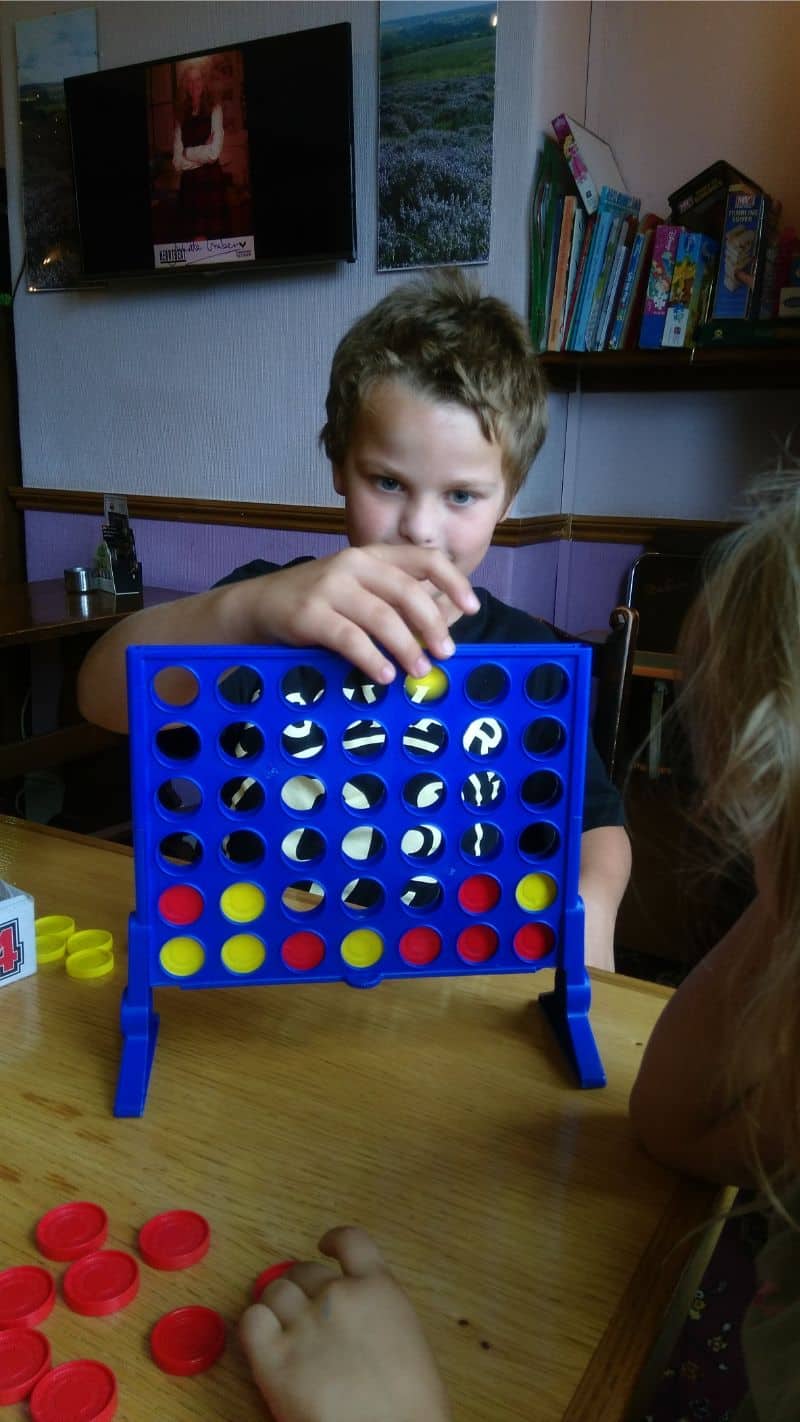 The pub is kept very much as it was in the series, so is interesting to see. Families are relegated to the family room, which I think could do with a little tlc, but there were lots of games for the children to play, so that was a nice touch. The food is cheap and plentiful, but also feels stuck a little in the past as far as quality goes. 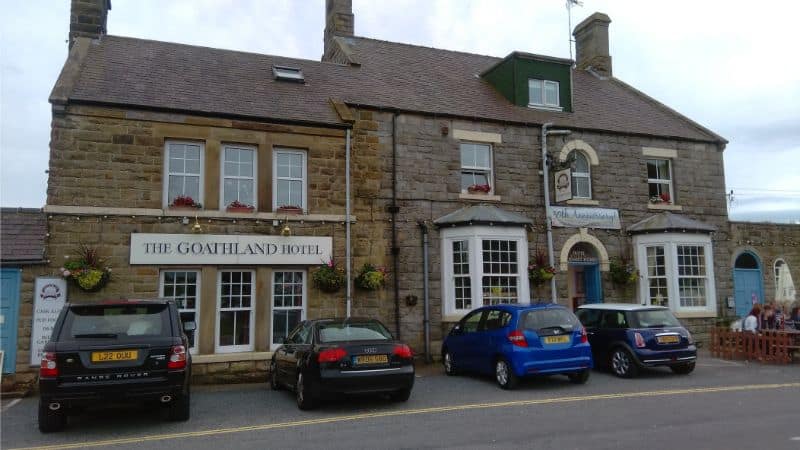 After our lunch and a wander we returned to the station to be greeted by Professor McGonagall in her animagus form as a cat. She was very friendly though and suggested that in the absence of butterbeer we tried the cake in the station tea rooms which we did! 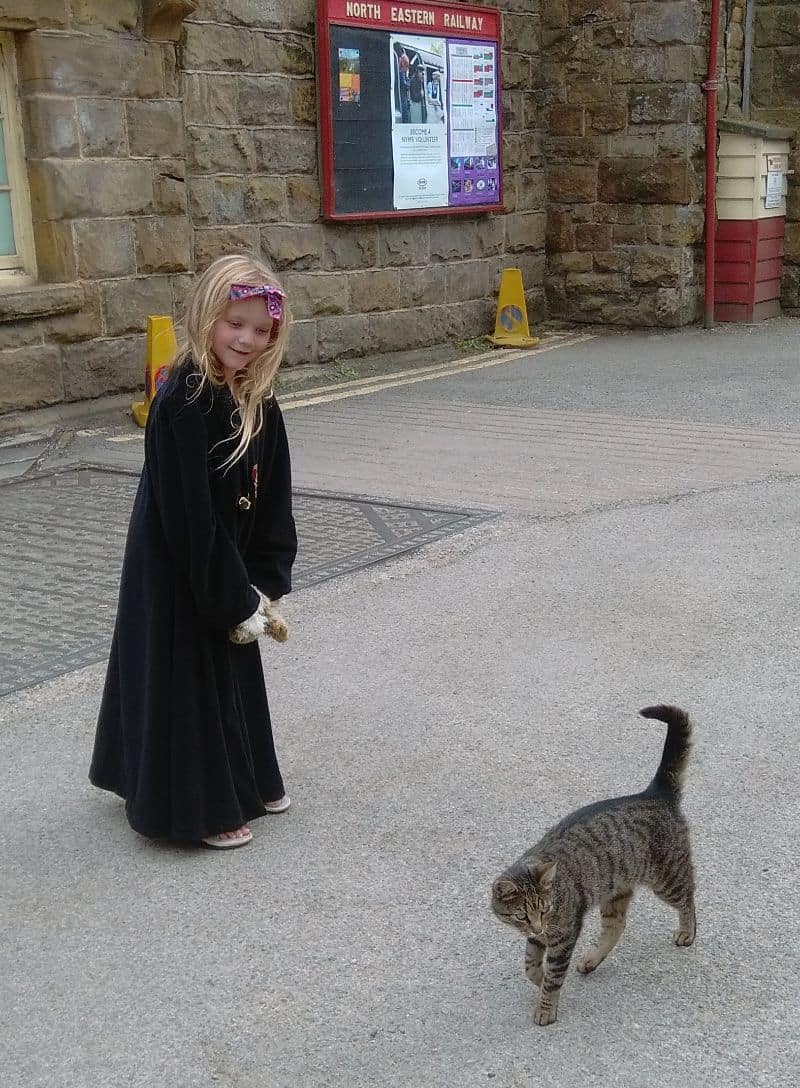 Miss H is a bit of a wordsmith and delights in spotting words within words. See her gleeful spot of the word ‘butt’ at the Castle Museum. The place name Goathland is hilarious to a six year old as, if you block the H out it becomes Goat Land. Which apparently is very funny – I expect a call from the Edinburgh fringe any day… 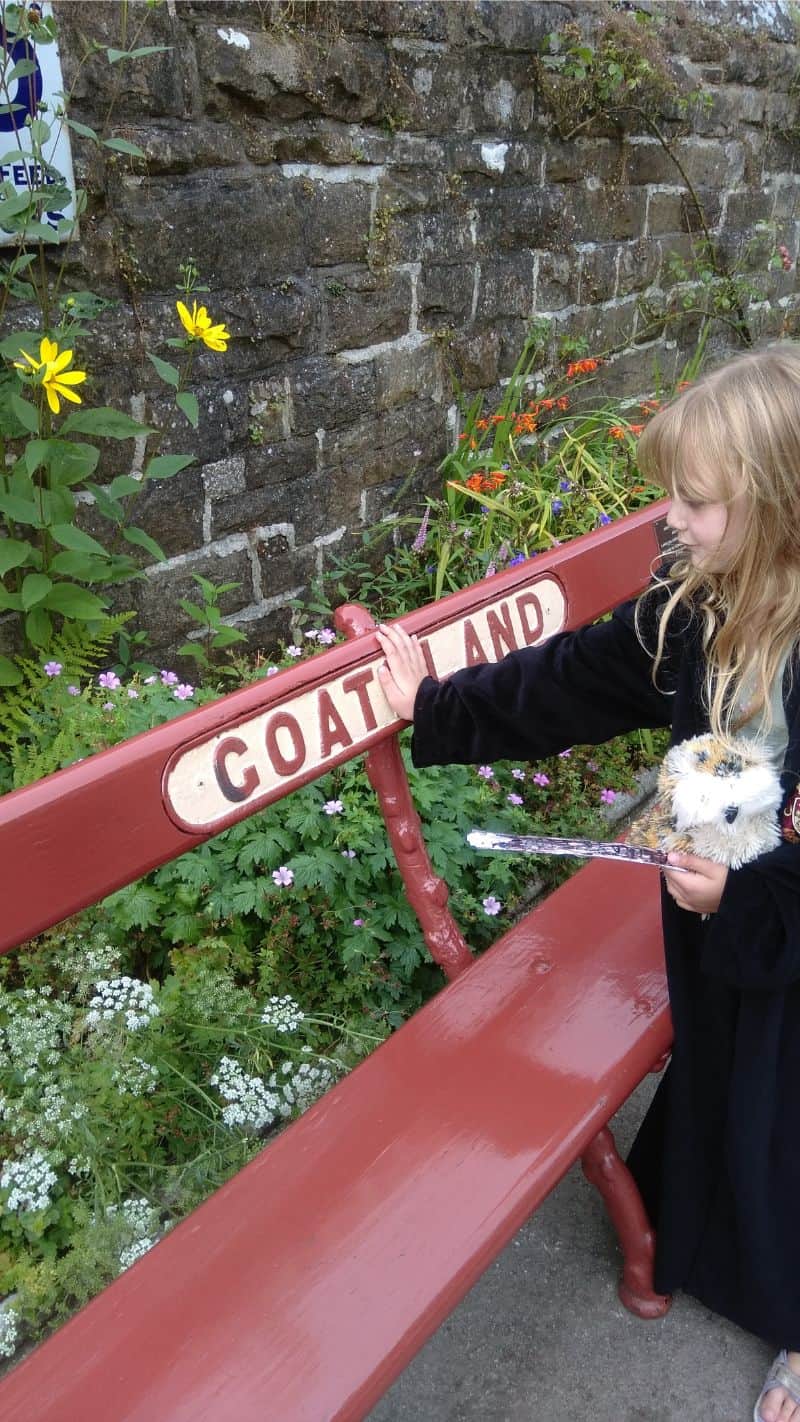 Once full of cake, we awaited the train to take us back to Pickering. The scenery along the route is beautiful and was comforting as we made our sleepy way home. If you are needed further tea and cake (and who doesn’t?) there are two tea rooms as well as a gift shop at Pickering to peruse.

Do check the website as there are various events run during the year. At Christmas ‘Yorkshire Santa Trains’ are run which sound fabulously festive and one we must try!

The NYMR is a not for profit organisation and is run by volunteers.

NYMR kindly invited us to visit to review. All opinions are my own and not influenced in any way.

Pin me for later: