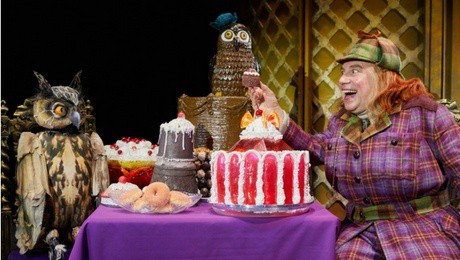 Many thanks to Chantelle for this great review.

Master T is a huge David Walliams fan.  He’s read every book many times, so was thrilled to be going to see the stage production of Awful Auntie at the Grand Opera House, York.  He wasn’t disappointed; he thought it was brilliant.  He sat in the seat next to me, transfixed.  Every now and then I heard a ‘wow’ and a ‘cool’.

The set was fabulous – four rotating turrets with doors and stairways brought to life spooky old Saxby Hall.  I loved the gothic arches and Master T loved the secret passages, and crazy chases.

Auntie herself was truly awful as the title suggests.  Whilst her niece Stella is in a coma, she instructs her pet owl to chew up snails and slugs and then drop them into the unsuspecting Stella’s mouth for sustenance.  There are plenty more examples of other grim, cringeworthy and downright naughty toilet humour that completely delighted my ten year old son.  Fart jokes aplenty –  he was in his element.  He wasn’t the only one though, the children in the audience loved it!

Reminiscent of Roald Dhal, the characters are wonderfully larger than life and anarchic.  The children particularly liked the elderly butler Gibbon, while I took a shine to the very small ghost, Soot.

Awful Auntie plays in York from 14 until 17 February next year and tells the story of Stella, who sets off to visit London with her parents, Lord and Lady Saxby, she has no idea her life is in danger! Waking up three months later, only her Aunt Alberta can tell Stella what has happened. But not everything Alberta tells her turns out to be true and Stella quickly discovers she’s in for the fight of her life against her very own awful Auntie!

“The Birmingham Stage Company’s Gangsta Granny is truly brilliant, so I’m hugely excited that they’ve now brought Awful Auntie to the stage. Wagner and I can’t wait to see it!” DAVID WALLIAMS