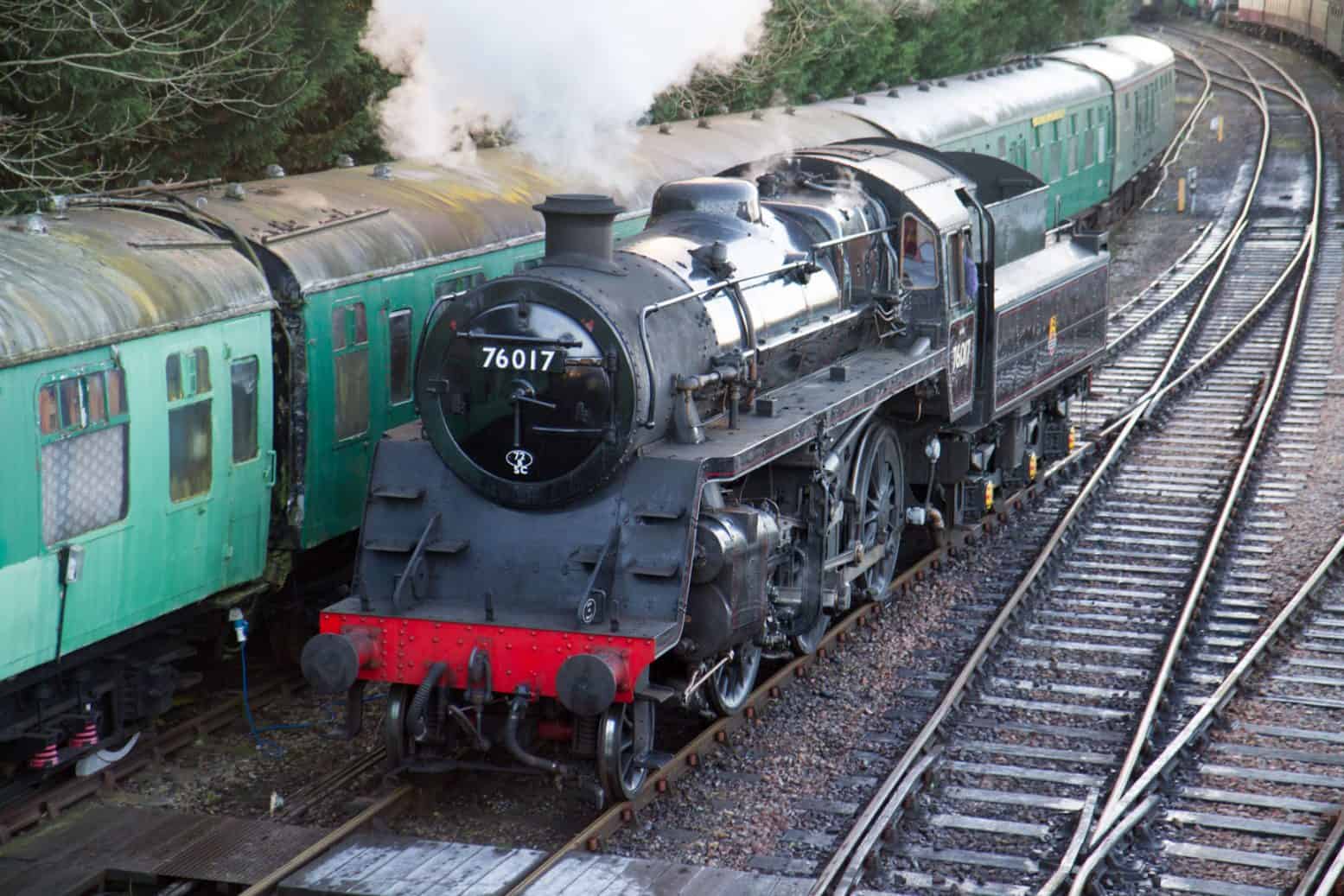 Eleanor from Savings 4 Savvy Mums has kindly written about The Watercress Line steam railway for us.

I have a toddler (2 years and 10 months) and a baby (3 months) and trying to find somewhere appropriate to take both of them and a husband for a day out is becoming a challenge. However, a firm favourite is the Mid Hants Railway – Watercress line. My toddler loves anything to do with trains, big ones, small ones and every sort in between, she would happily sit on one for hours. Similarly, my husband finds great pleasure riding in a steam train. However, I am not particularly enamoured with sitting in an old carriage but even I can appreciate the joys the Watercress line has to offer. (Shockingly, my baby had no opinion either way!)

History of the Watercress Line

The Watercress line started life in 1865 for transporting locally grown watercress to London and beyond. Today it is open to visitors to sit back and relax as the train takes you between Alton and New Alresford, stopping at Roply and Medsted and Four Marks. Not something you would ordinarily think a toddler would like but from beginning to end my toddler loved it. As we pulled up in the car park at New Alresford she could see the train and instantly became excited.

The main problem with the Watercress line is that it is rather expensive, (£16 per adult in 2016) but as it was pointed out to me by another passenger – we either support these things or lose them. However, once you have your ticket you can go on the train as many times as you like. Tickets bought and onto the platform we went, my daughter filled with excitement at the prospect of riding on a big train. There is a good selection of steam and diesel trains which are used. To the disappointment of my husband, the first train of the day was a diesel but my daughter didn’t mind at all – and to be honest neither did I. We spent a while choosing the best place to sit, how close to the engine should we be? The carriages are some of the original ones they used when it was a fully operational line and it is lovely to sit in a little piece of history. The guard came round and was full of interesting information about the history of the train line and wasn’t phased by the toddler running around his heels!
[singlepic id=689 w= h= float=center]

The line provides a 45-minute trip to Alton from New Alresford stopping at two stations in between. The first of which is Ropley. For any Harry Potter fans, you can see the iron bridge where Harry receives his train ticket in Harry Potter and the Philosophers Stone.  If you are a Harry Potter fan also look at the North Yorkshire Moors Railway steam train for lots of other Harry Potter filming locations.

We went in winter so we didn’t take advantage of the picnic area at Ropley – although we definitely will when we return in the summer. Ropley also provides the backdrop for most of the entertainment on Days Out with Thomas days. We did enjoy wandering around the loco yard where you can get close to the locomotives. My daughter could not believe how large the trains were when she wasn’t standing on platform. The second stop is Medsted and Four Marks, however unless you walk into the little village there is very little to do there.

The Cafes in Alton

Once in Alton we all bundled off the train and walked the short distance to Alton itself. There we found a number of lovely pubs and restaurants to choose from. We could have eaten at the café at either Alton or New Alresford if we had chosen to. They provide a simple range of food but perfect for little ones. There is also a lovely little walk around a lake only a 5-minute walk from the station. Which again is perfect for shorter legs.

Thankfully, there was a steam train for the return journey and even my daughter stood enraptured as we watched the train go from one end of the carriages to the other. We were also able to sit on the first-class carriage which made feeding my baby easier as there are tables on all of the other carriages, it also meant there was somewhere for our older one to move about without disturbing other people. When we pulled up at New Alresford the train went to get water and spectators could stand on the bridge and observe the train in all its glory.

All in all we found it was a full day out that our two year old and her 60 year old granddad thoroughly enjoyed. It provided the ideal location for those colder, damper days when you don’t want to be outside all the time but equally the thought of being stuck inside all day is daunting. Although the tickets were little expensive we will be back again soon – probably the next time Thomas makes a visit.

Savings 4 Savvy Mums is a frugal based parenting blog that offers money saving tips, tricks and bargain deals, with a dash of humour thrown in. Come join our penny pinching community over on Facebook or follow us on Twitter for all our latest deals and posts.