This year’s big summer show at the York Theatre Royal is The Secret Garden based on the novel by Frances Hodgson Burnett. Now, it has always been a favourite of mine, along with her other novels A Little Princess and Little Lord Fauntleroy (am I the only one who remembers that?). I have watched every TV adaptation avidly – and some were better than others! So you can imagine how thrilled I was when I heard it was to be this summer’s show! 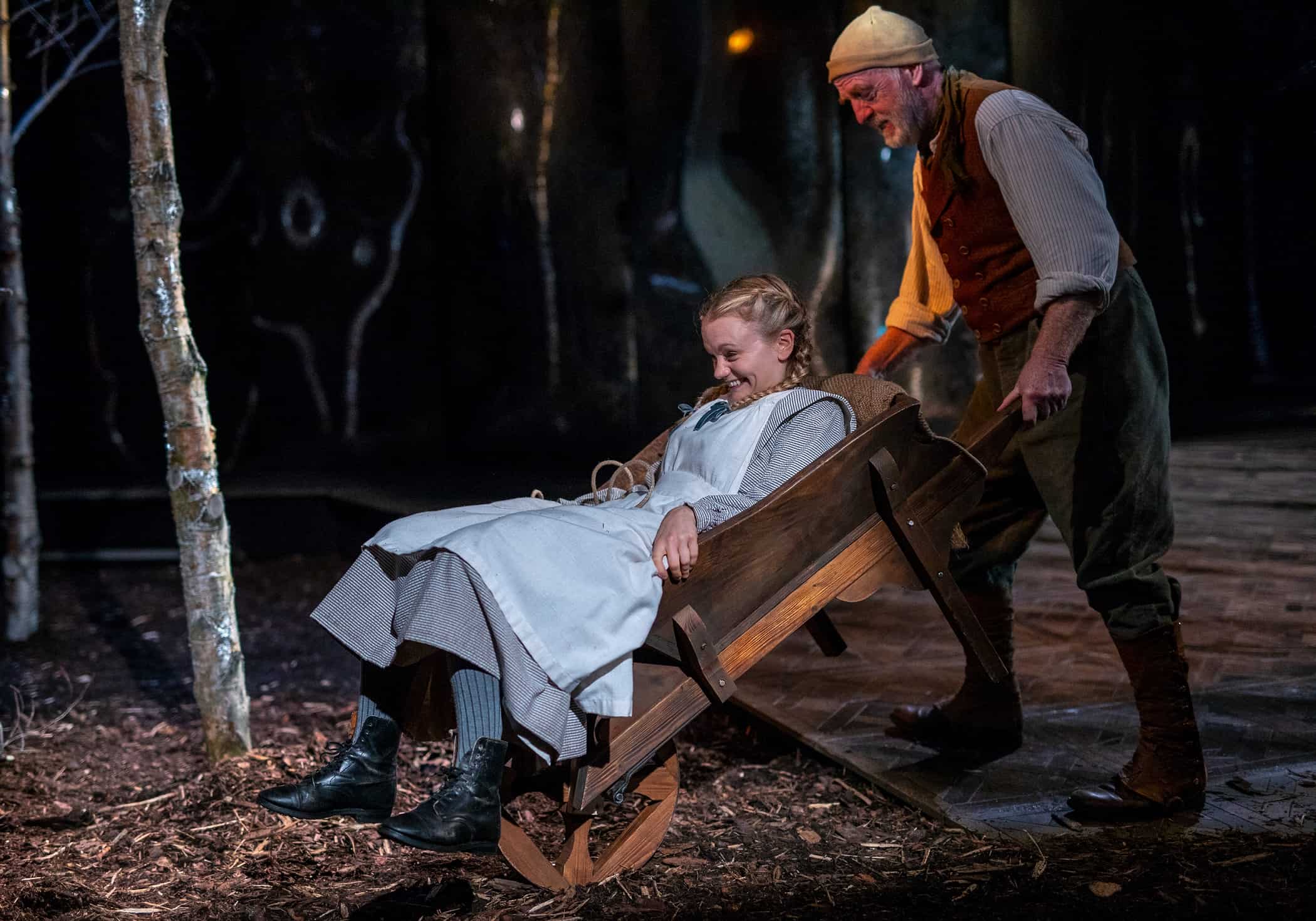 I will say right off – I was not disappointed! It was utterly enchanting – a really beautiful adaptation, well acted and very cleverly directed. My children (who, I have to confess were in a bit of a grump beforehand) were enthralled. They sat, completely entranced, whispering curious questions to me that I heard similarly echoed from the children sat around us. ‘Who is that? Why did she do that? Will it be ok in the end?’. There were even a few funny bits that got a big grin from Master T. 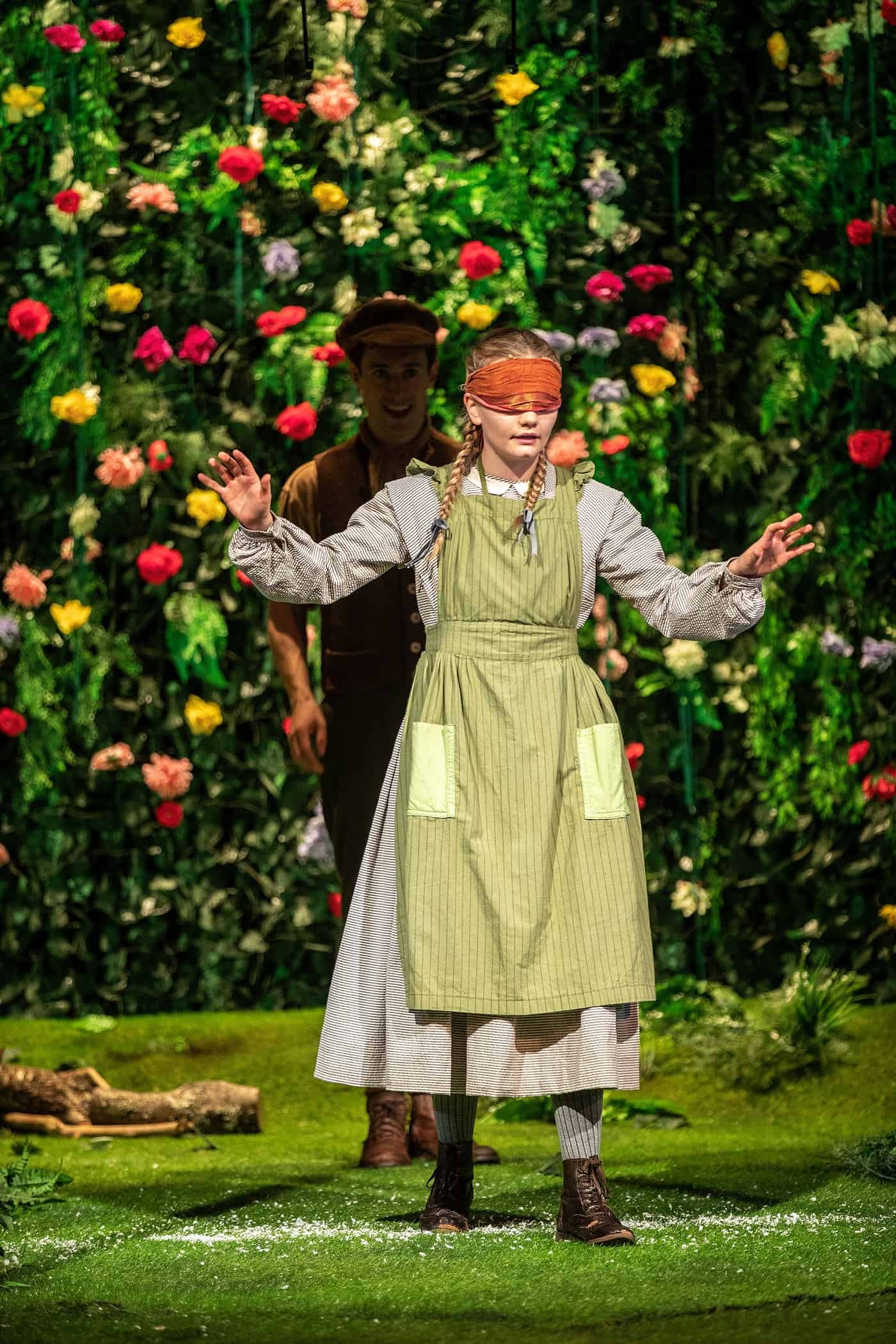 I must mention the set too – it was, by turns both mystical and beautiful as I think you can see from some of the photos. 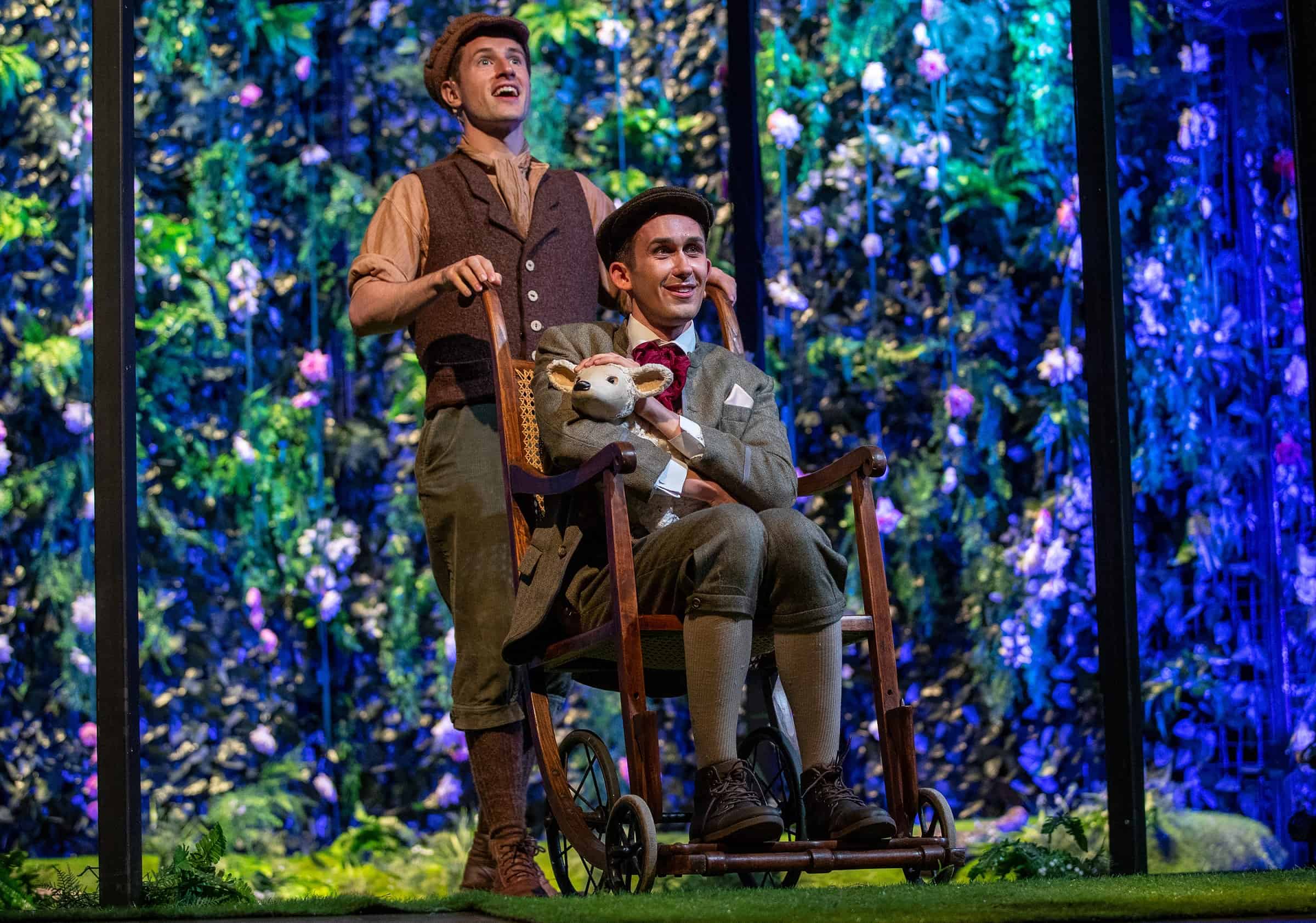 Mary Lennox is left orphaned after her parents die in an earthquake in India. She is brought to the mysterious Misselthwaite Manor on the Yorkshire Moors to live with her reclusive uncle. A withdrawn and sad child she is brought out of herself by the characters she meets, in particular Dicken, brother of one of the serving girls. He loves animals and they love and follow him. The animals in the play are portrayed with some marvellous puppetry. There was a wonderful magical quality to the animals, they really came to life. In fact there was a wondrous magical quality to the whole play. We all loved it. Judging by the standing ovation and the excited chatter on the stairs as we all filed out, everyone else loved it too.

Read on to know more about the show and the cast.

It’s 1910 and spoilt, lonely Mary Lennox lives a life of luxury in India with her aristocratic parents. But when an unexpected twist of fate suddenly leaves her orphaned, she is sent to live with an unknown uncle in Misselthwaite Manor – a mysterious place – on the wild Yorkshire Moors.  With the help of some unexpected friends, Mary sets about discovering the legend of its secret garden.

With a delightful score and a menagerie of puppets, Jessica Swale’s richly imagined adaptation of Frances Hodgson Burnett’s much-loved classic The Secret Garden is a summer must-see for all ages at York Theatre Royal from July 27 to August 25.  Director Liz Stevenson restages the adaptation that was a big Christmas hit at Theatre by the Lake in Keswick. Set and costumes are designed Lily Arnold and with a score by Barnaby Race. 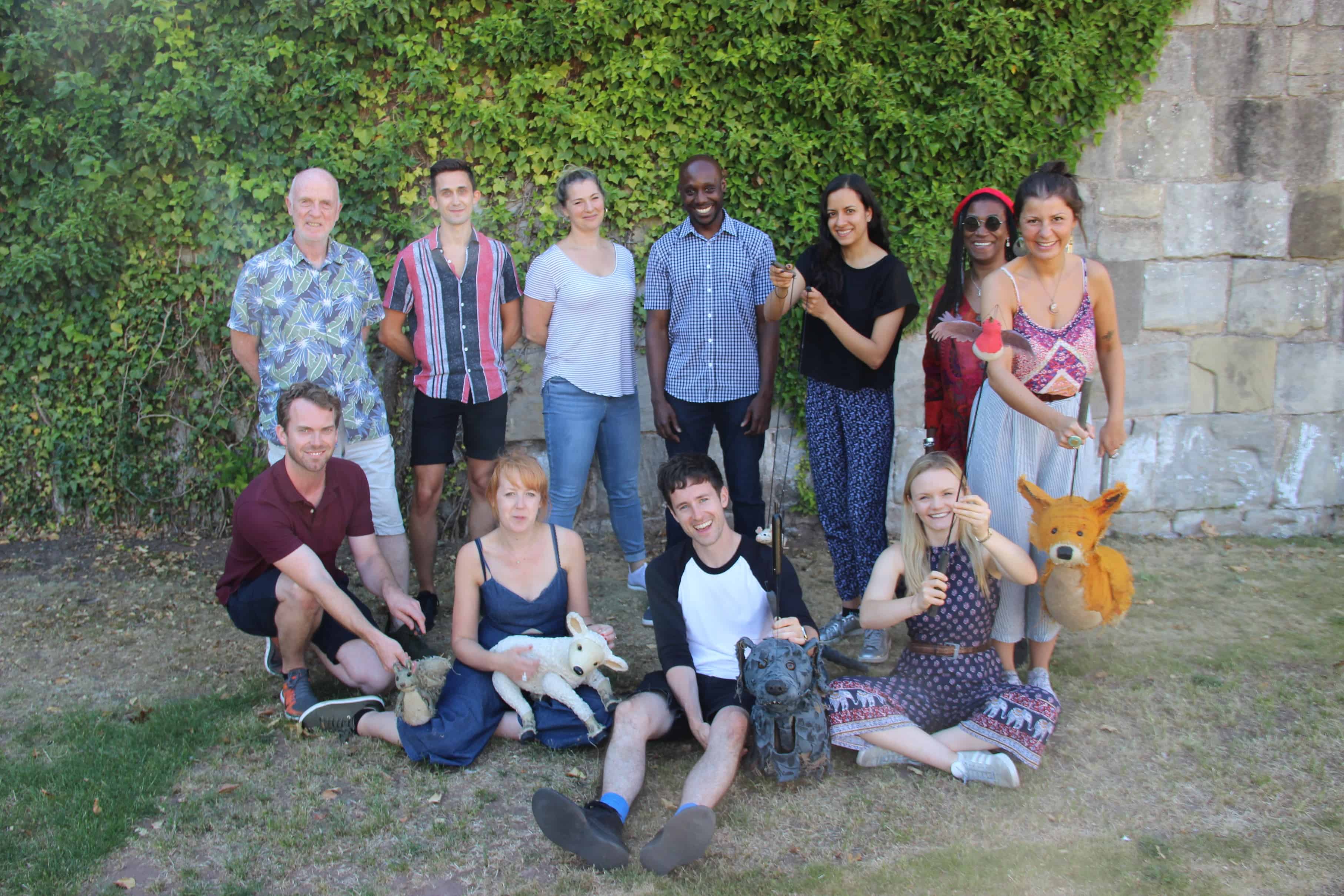 ‘I am thrilled that our production of The Secret Garden will be coming to York Theatre Royal. It was a wonderful experience making the show in Keswick last Christmas, and to see how the audience there took the story to their hearts. It feels particularly special to now be bringing it to Yorkshire.

“Through the journey of the play we see how Yorkshire’s beautiful landscape and the warmth of its people turn Mary’s life around. Jess Swale’s adaptation of this much-loved classic brings all of its magic and mystery to life on stage, and we’re excited about reviving it for York Theatre Royal this summer.”

Liz Stevenson won the JMK Young Director Award in 2015 for which she was awarded the opportunity to direct her production of Barbarians at the Young Vic. The production was nominated for an Olivier award for Outstanding Achievement in an Affiliate Theatre.  She is the associate director at Theatre by the Lake and artistic director of Junction 8 Theatre. Her work as a director including Under the Market Roof, Handbagged, How My Light Is Spent (nominated for two Manchester Theatre Awards 2017), Macbeth, Bluestockings, Too Fast and Minight at the Hotel Beauregard. 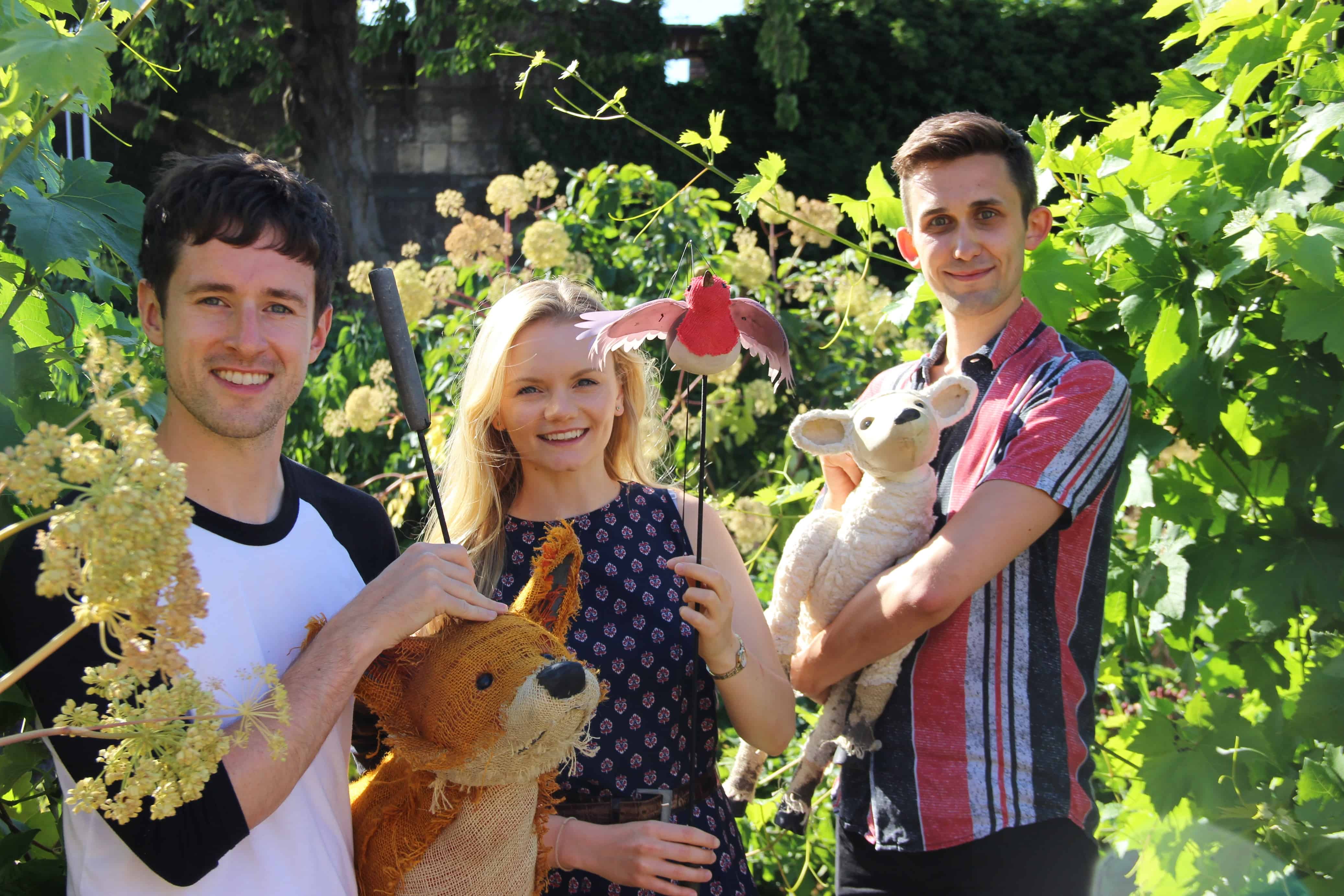 Adapter Jessica Swale is an Olivier award-winning writer and director. Her first play Blue Stockings (Shakespeare’s Globe) won her an Evening Standard Most Promising Playwright and is now on the GCSE drama syllabus. Other plays include Nell Gwynn, which transferred from the Globe to the West End and won the Olivier for Best New Comedy, and adaptations of The Jungle Book, Sense and Sensibility, Far from the Madding Crowd and Stig of the Dump.  Directing include The Belle’s Stratagem (Evening Standard Best Director 2012 nomination) and numerous productions for her company Red Handed at the Arcola, the Park and Southwark Playhouse.

What the critics said about The Secret Garden at Theatre by the Lake:

“Bursting with Technicolor vitality” The Stage

Great Yorkshire Fringe 2018 – Theatre and Comedy in York this Summer
Hollywood Bowl Leeds – What’s it Like?