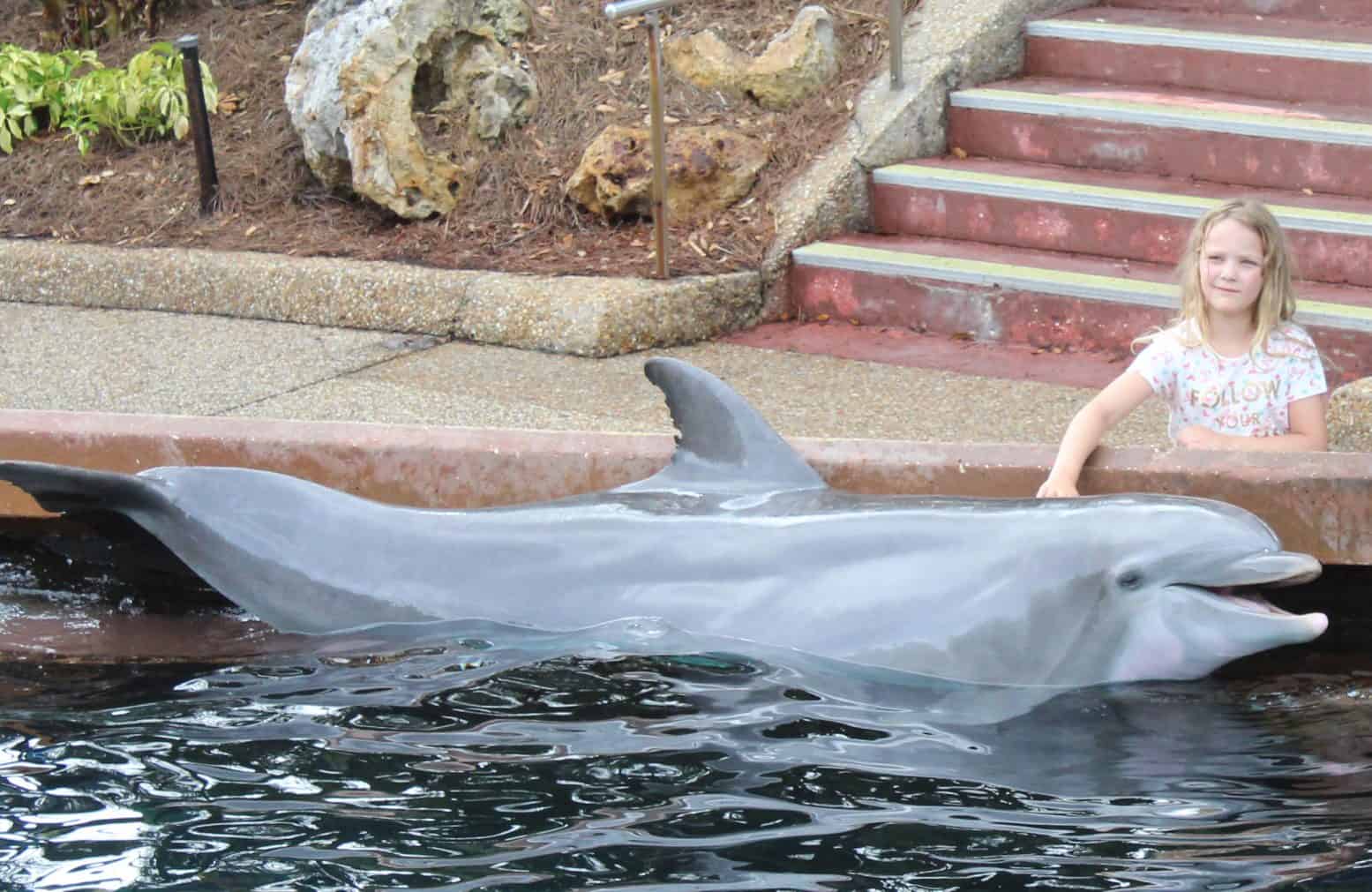 We only did one day outside of Walt Disney World on our latest trip and that was to SeaWorld, Orlando. It was a real (and refreshing) contrast.

For a start it wasn’t anywhere near as busy as Disney, which was such a relief. I felt I could really wander and enjoy looking around me (for the record, I am a huge Disney fan, but would love it if it was not quite as crowded – I realise however that everyone else loves it there too, and that’s why it is so busy!). 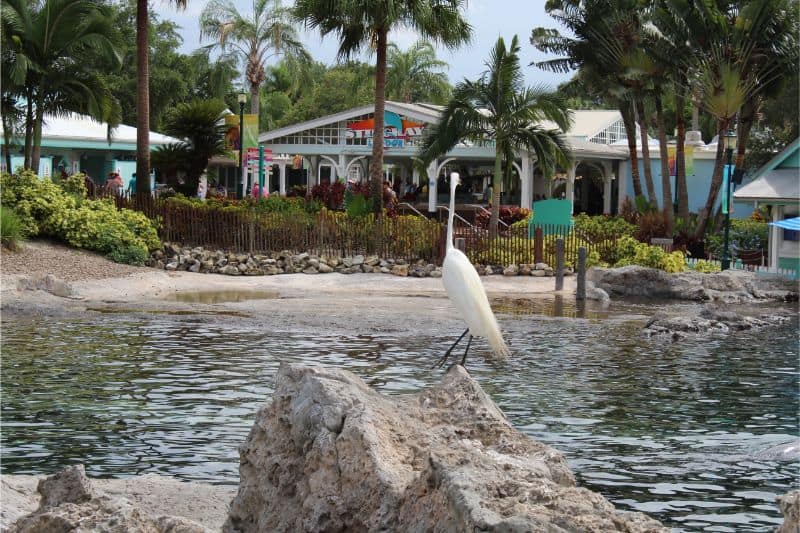 There is more than you can see in just one day

We just had the one day in SeaWorld and was there from mid-morning until it closed, and we still didn’t get to do all the things we wanted to, so two days would be great.  You can get tickets for SeaWorld, Busch Gardens and Aquatica bundled together which is definitely the most cost effective way to go.  Prices start from £110 per adult and £106 per child for 14 days unlimited entry – which I think is brilliant.  Free parking too – which is great.  Disney World charge $22 per day for parking! 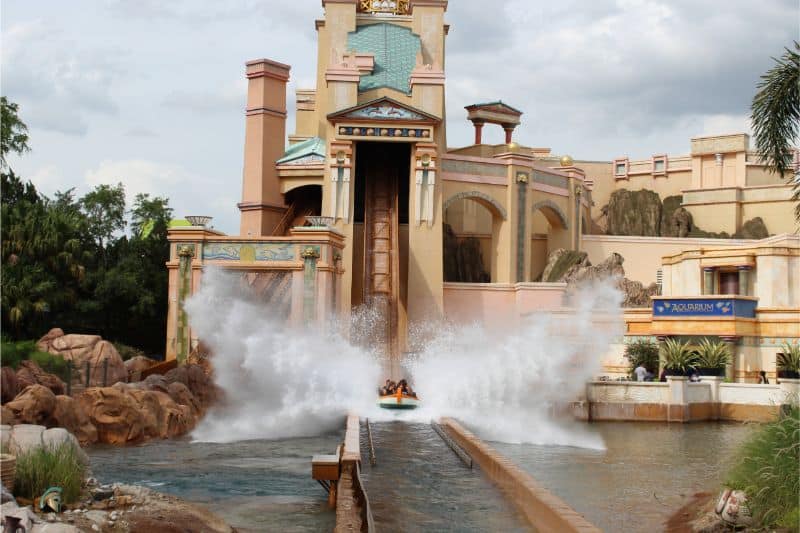 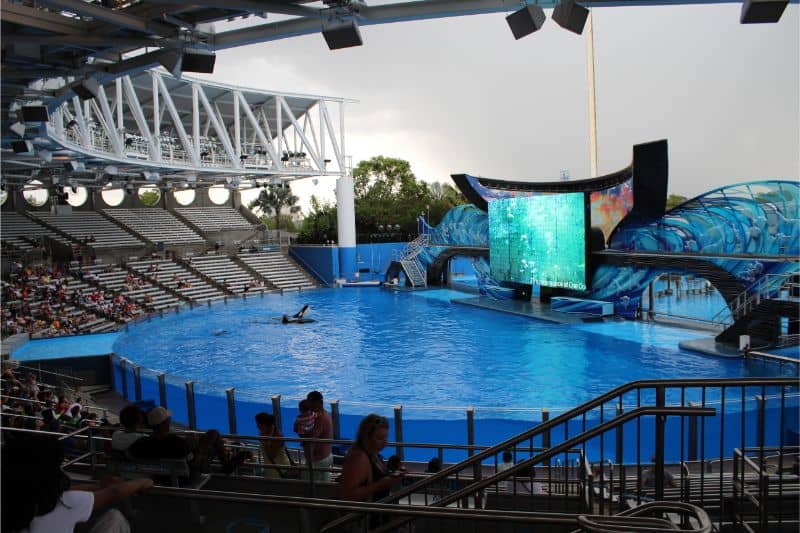 Plan your day around the shows

There were five shows on throughout the day. You can download an app or pick up a map with showtimes on the back.  Before you go though, you can look online and see what times the shows will be and then plan your day around the shows, as it would be so easy to miss them and that would be a real shame!  (That link gives current opening times too) 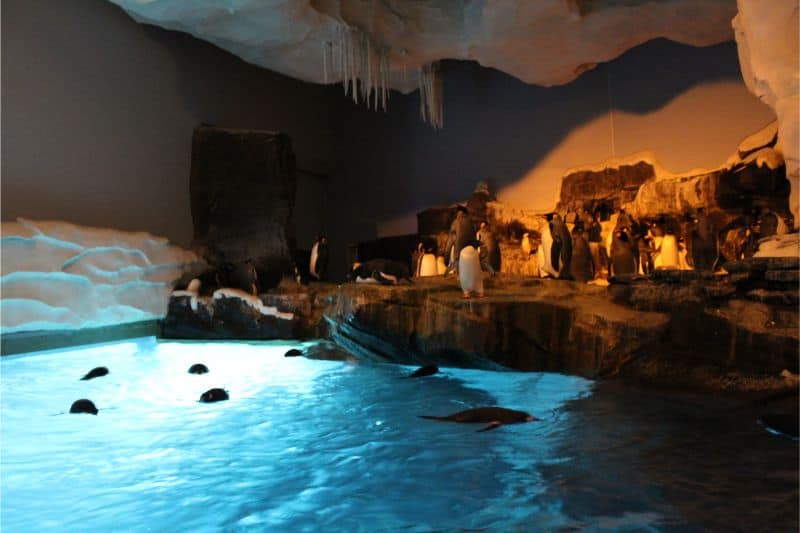 The first show we saw was Pets Ahoy. It sounded ok from the description, and was the next show of the day so for that reason alone we decided to do it (we may not have bothered otherwise). I am so glad we did though, it was brilliant! 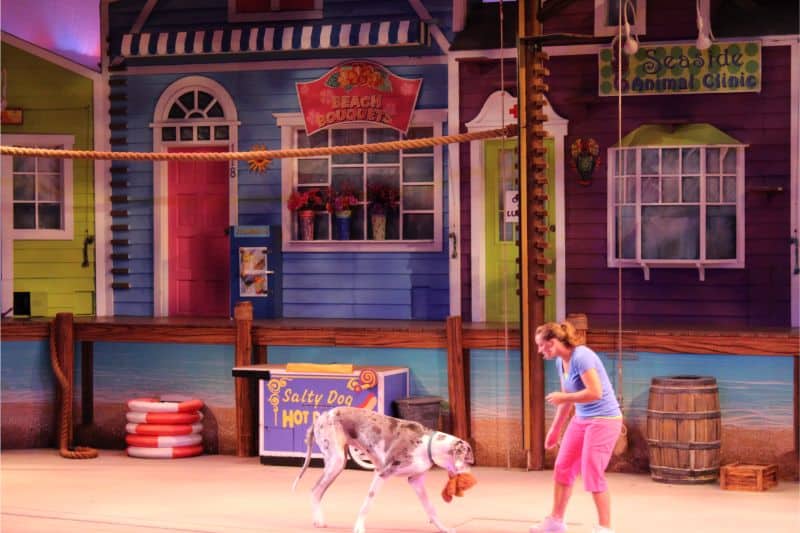 There were cats, dogs, birds, a rat and even a skunk in the show. It was clever and funny and extremely entertaining! All of the animals come from shelters and are trained there. I was particularly impressed with the cats, (we have cats and they really have a mind of their own!).  After the show you could chat to and pet some of the animals which Miss H loved!

When we emerged from the pet show, the dolphin show was about to start, so we scuttled across the park to get there on time. Miss H desperately wanted to see dolphins on this trip to Orlando, so we wanted to make absolutely sure this happened early on. We all loved the dolphin show, it was truly spectacular. 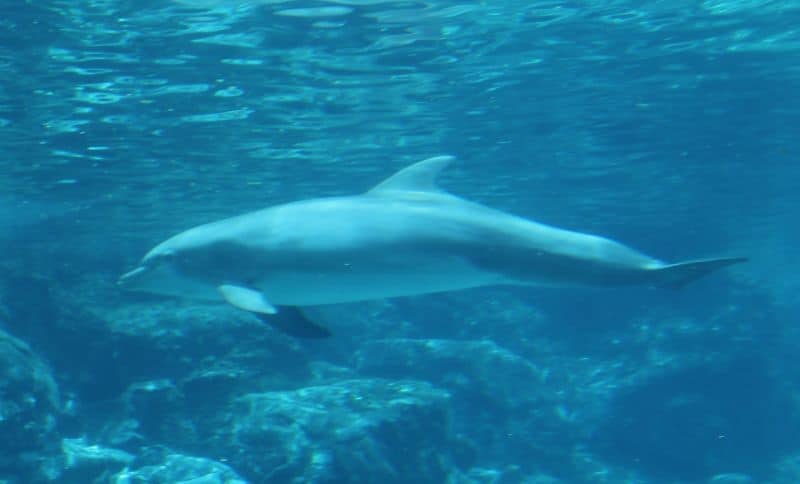 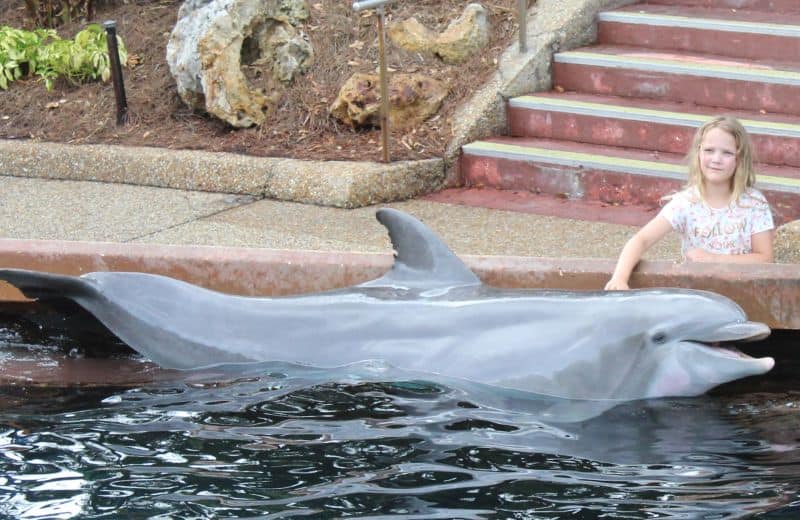 Cameras are not allowed during the encounter and guests are encouraged to buy the official photos. I took my photos from the viewing platform – and they came out great.  The dolphin encounter was $15 per person and lasted around 10 minutes.  It was worth it for the memories Miss H will have! 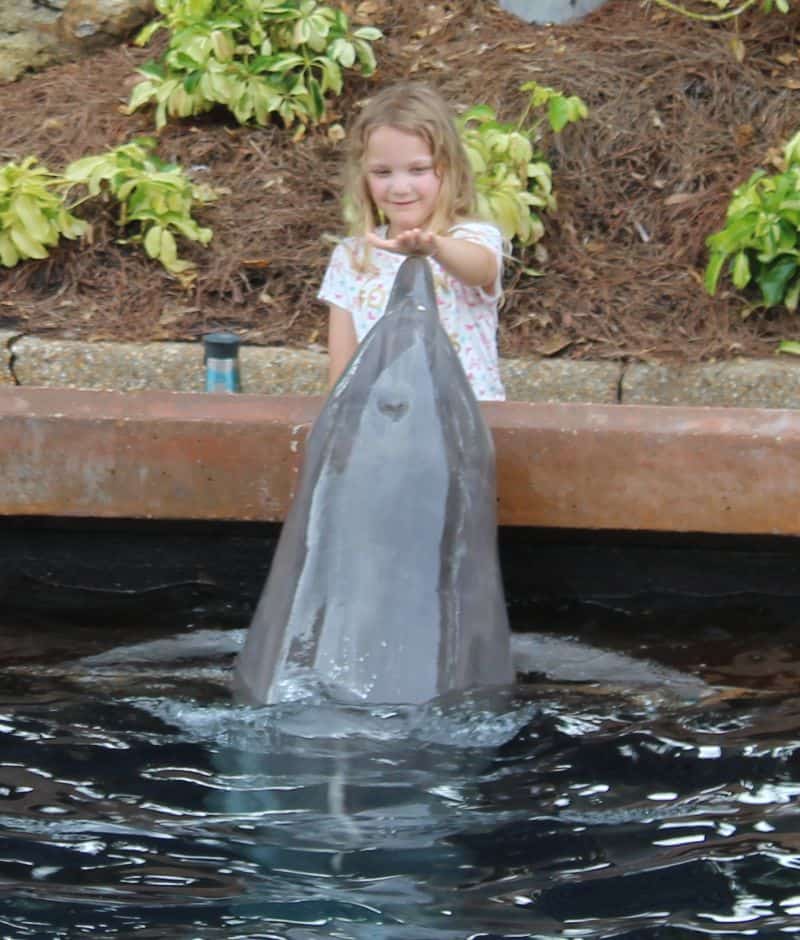 We saw stingrays (you could feed them) and manatees, as well as a giant turtle in Turtle Trek. On that note, don’t miss Turtle Trek. The attraction begins with huge viewing tanks of fish, manatees (huge gentle walrus like sea creatures, also known as sea cows). 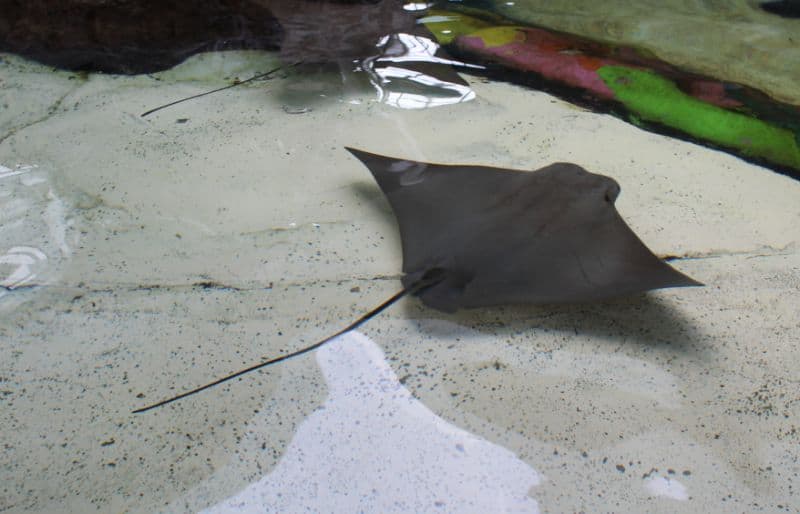 Then you proceed to a huge dome where you don 3D glasses and see the perilous lifecycle of a turtle, all around in glorious 360 degrees technicolour – from the perspective of a turtle. Its clever and engaging, and one you shouldn’t miss. Make sure you go in when you are not tired though as there are no seats in the theatre (by then I would REALLY have liked one!) 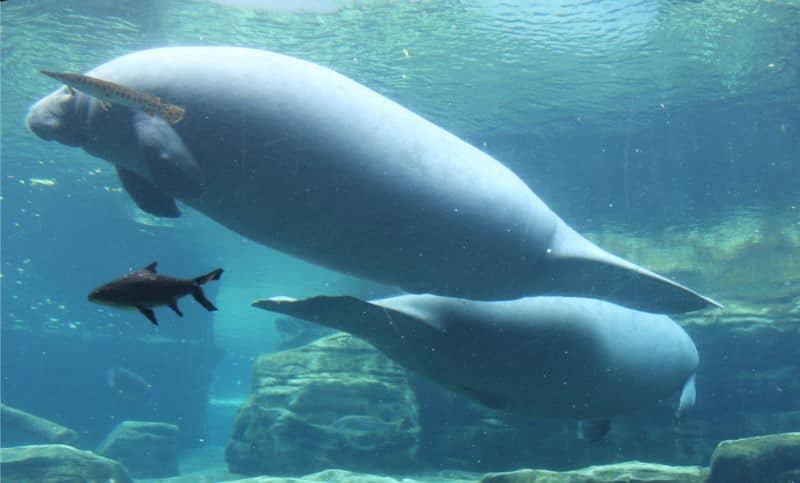 Antarctica – Empire of the Penguin

Another fabulous attraction is Antarctica, Empire of the Penguin. There is a ride and a walk-through area. We chose to walk through the attraction, and were stunned to come through to a room filled with extremely cute Gentoo penguins. 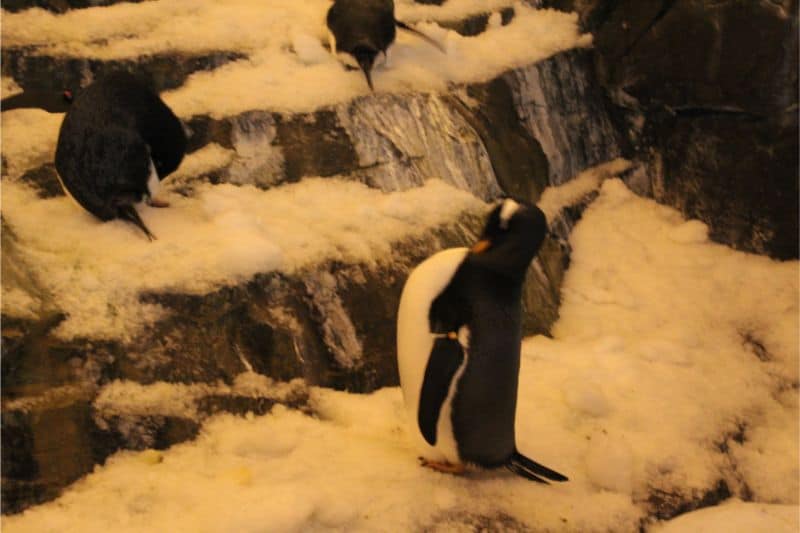 There is genuine ice and snow on the exhibit so expect to be chilly (absolute bliss on a hot Florida day!!).

When we emerged from the lovely cool of the penguins we planned to ride the Sky Tower. Which is a 400 foot high observation tower.   It was sadly not to be though as dark clouds chose that moment to roll in and the sky was illuminated with bolt after bolt of forked lightning. I love a good thunderstorm, but was disappointed to miss out on the tower. We then wandered over to Shamu but that had to be cancelled too. We had already done so much, we didn’t mind too much, it’s always nice to have something to go back for. On that note, we also missed Shamu’s Happy Harbour with rides and attractions for younger kids. We will do it next time – we just could not fit it all in one day!

Ooh, before I go, must mention that SeaWorld is a haven for the little lizards you see in Orlando, we saw dozens of them! Just keep an eye on the ground where they bask so you are not standing on them.  The kids named it Lizard-World. 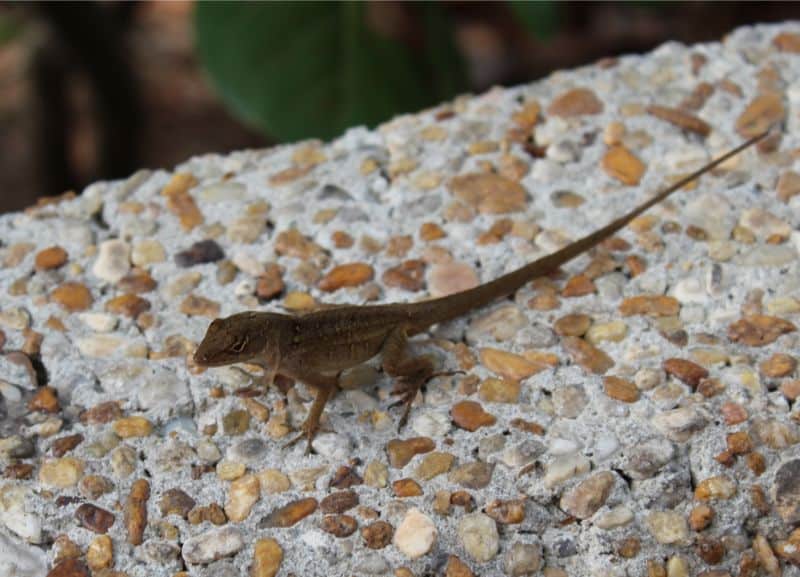 Food and Drink At SeaWorld, Orlando

This post got quite long, so I have created a whole new post for food, drink and menu pictures in SeaWorld!

Many thanks to SeaWorld, Orlando for inviting us to attend and review.