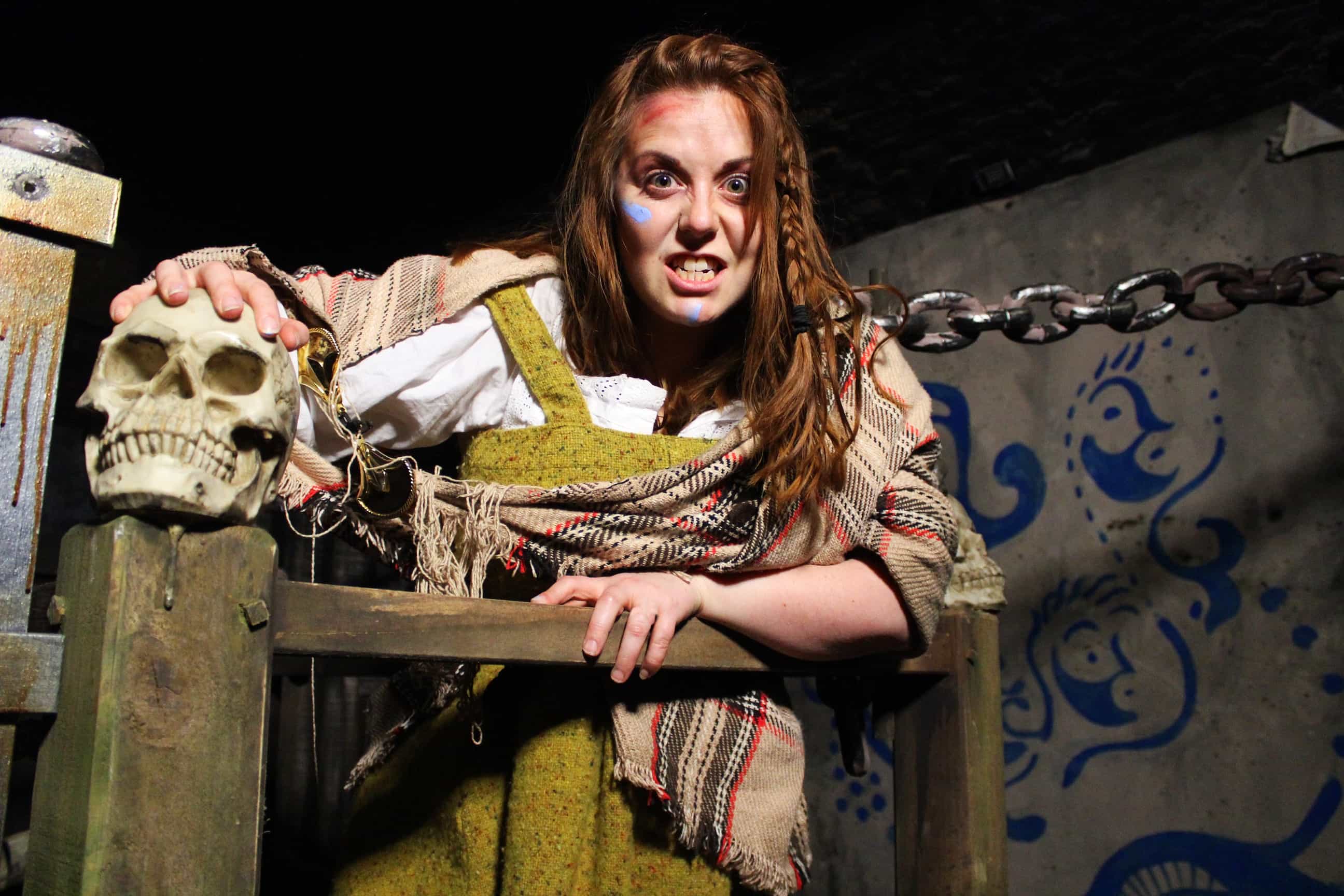 It’s many years since I have been to the York Dungeon and it has changed massively in that time. I was, I am slightly embarrassed to admit a little apprehensive beforehand. Was it going to be too scary or worse (for me) gorey? As you might have predicted it was absolutely fine! There were some gorey parts, and several scary parts, but funny scary not scary scary! (If you know what I mean!).

So what happens when you get into York Dungeon?

Once you enter the dungeon there is a photographer taking some brilliant souvenir photos. I had to hold a sign up saying ‘bad witch’, and my friend was put into the stocks. You could really have great fun in here – perfect photos for Facebook! You can buy these on your way out.

From there you gather in an antechamber with other people who become your tour group. Once the group is large enough you are taken through to the first room on your gruesome tour of the history of York. In every room you have a costumed guide. They are all excellent and stay in character the whole time. The rooms are dark and shadowy and the tension really builds at times.

The scene setting and technology throughout the York Dungeon is seriously up to date and impressive. It’s used in an ingenious fashion and really backs up the excellent guides. I won’t tell you too much about it as – you know – spoilers, but it’s very modern and clever and what you would expect from a Merlin attraction. 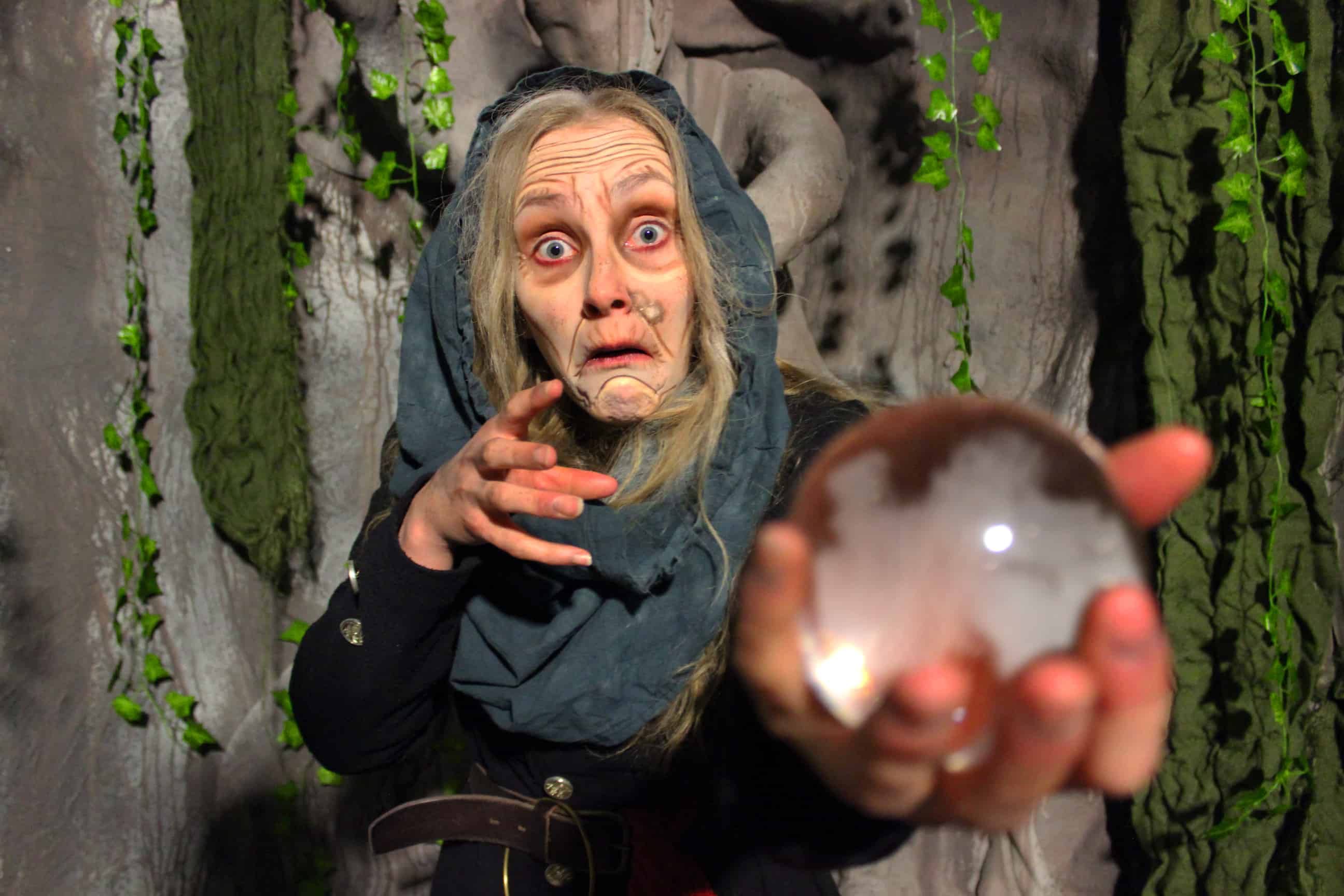 In each room, a member of your group is ‘picked on’. I tried to hide towards the back and in the middle of the group but got pulled out in the very first room. I was renamed ‘Hilda’ and given a scroll to carry through to the next room. There, I was placed above the group in a ‘barrel of vipers’. Let me just say that although there were no real snakes in the barrel with me, they still contrived to make me shriek as if there were!

In fact, I think I may have won the award for the loudest scream during the tour (if such an award existed), when during a particularly tense story the guide mysteriously appeared behind me rather than in front!

I thought it was all brilliant, and haven’t laughed (or shrieked) as much in ages. I didn’t take the children as I wasn’t sure if they would be a bit too scared. They are currently 8 and 10 and are not the bravest of children with this sort of thing.  I think I will wait until they are a little older to take them.  My son would have liked the naughty bits though!

It’s a brilliant attraction and an interesting insight to York in days gone by.  It was a real hit with us.

A bit of info about The York Dungeons Yorkshire Rogues & Legends

The York Dungeon have a new show, featuring a forgotten character from the county’s Celtic history: Cartimandua, the Queen of the Brigantes.

One of Yorkshire’s overlooked characters from history has made their return to The York Dungeon, in a brand new show all about Cartimandua, the Queen of Brigantia (the Celtic Kingdom that would later become Yorkshire). But rather than fight against the Roman invaders, like the well-known Warrior Queen Boudica; Cartimandua sided with the enemy, and made sure to hand any traitors over to them.

“Cartimandua is a larger-than-life character from Yorkshire’s history” says Performance Supervisor, Richard Barker “not only did she side with Rome, but when her fellow Celts came to her for sanctuary, she would simply hand them over to the Romans instead, and would be rewarded handsomely for it too.”

The new show aims to blend all the humour and scares that The York Dungeon is known for, with new special effects, characters and gags for audiences to enjoy.

“Our new show has some absolutely hilarious, new surprises, and loads of audience participation” continues Richard, “make sure you look as innocent as possible, as one traitor from the group will be found, and punished”.

Cartimandua is the first in The Dungeon’s Yorkshire Rogues & Legends shows, a series of new shows for 2018 exploring famous characters from the county’s history who have been out of the lime light in recent years. The hope is that their shows shed new light on under-appreciated characters from history, who have just as much relevance as their more famous counterparts.

Richard concludes, “Cartimandua was a clever & strong leader, who used her cunning to outsmart and destroy her enemies. Hopefully this new show will give people a glimpse at history they never knew existed in Yorkshire, and the powerful women that led the way.”

For more information on the new shows, visit York Dungeons.

The closest car park to the York Dungeon is Castle Car Park – but it’s my least favourite car park in York.  It’s always busy and the spaces are really tight.  If you are planning to come into York for the day I’d recommend the Park and Ride, usually cheaper and far easier than parking in York itself.

We also have a guest review of York Dungeon at Halloween.  Looking for other days out in Yorkshire?