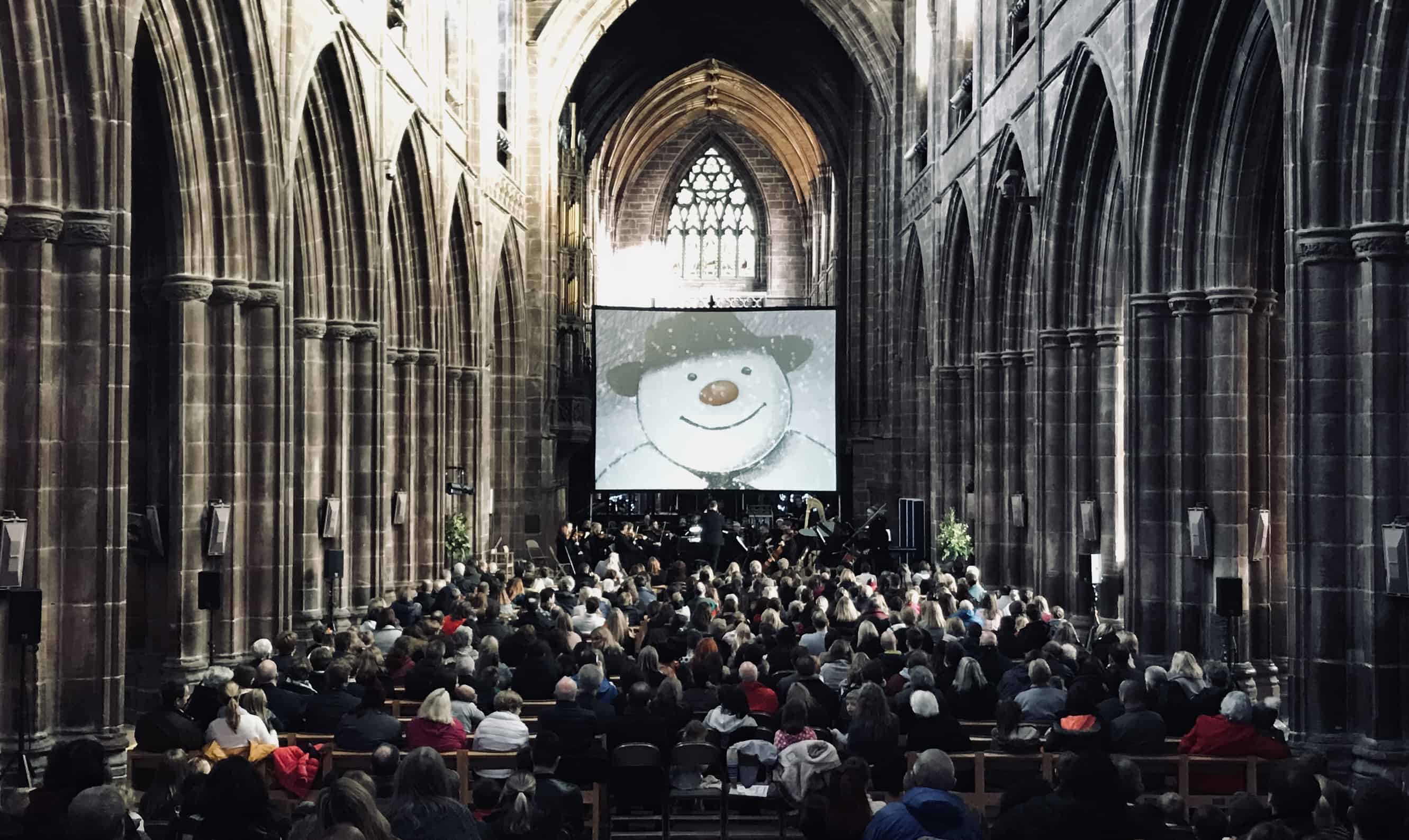 The Snowman Beverley Minster – We were lucky enough to be invited to Carrot Productions afternoon performance of the Snowman, with a live orchestra at Beverley Minster. We really didn’t know what to expect, when we arrived we were met on the pavement by a very jolly man in a Christmas jumper who was making sure everyone went through the right door. Although there were a lot of people all arriving at the same time there wasn’t really a queue and we were soon inside, which was lucky as my husband doesn’t really do queuing! There was a reasonably priced merchandising stall and refreshments were available. More happy staff showed us to our seats.  As a family we are quite used to visiting old churches and so were well dressed for the occasion, but I would advise everyone to layer up, if the heating is toasty warm you can always take something off but realistically Beverly Minster is a huge old building that is probably always a bit on the chilly side. I realised that we had been sensible is wrapping up warm when the orchestra took their seats with several of them clutching hot water bottles.

The Minster was packed, the vicar opened with a welcome and a prayer and then the show started. Firstly we were treated to ‘The Sleigh Ride’ by Daniel Whibley. Daniel is the Artistic Director and Double Bass player, he told us the hilarious story of the orchestra getting stuck in the snow on their way to Durham Cathedral, with Charlie the dog coming to the rescue accompanied by some great Christmassy songs. Next up was ‘The Bear and the Piano’ narrated by Joanna Lumley. This is a heart warming tale about a bear who finds a piano in the woods, I won’t give any more away but will just say that I had a tear in my eye at the end. Miss M, who is 8, was fascinated by the orchestra who were all wearing festive headgear.

I have to confess that I haven’t ever seen the Snowman all the way through, it was brilliant! The orchestra just adds another dimension to it. When the soloist took her place and sung “We’re walking in the air” I cried, although not as much as her mum and grandma who were sat next to us, it was so beautiful. Apparently she had only had the chance for one run through with the orchestra! We left the Minster with a warm Christmassy glow and looking forward to seeing Carrot Productions new collaboration with Ardman Animations Wallace and Gromit’s Musical Marvels, we LOVE Wallace & Gromit!

This review was written for us by Sara Dace-Hughes.  She was invited to attend but all views and opinions are her own.

Have a look at the official bit:

You can buy tickets for the Snowman at Beverley Minster here.  Tickets start at £10.80.   The Bear and the Piano will also be shown.

This is the sixth annual tour by Carrot Productions, the most prolific performers of The Snowman film with live orchestra in the world. This year they are visiting more venues than ever before. Eight cathedrals – Beverley, Blackburn, Chester, Durham, Gloucester, Lichfield, Liverpool and Winchester – are among the 16 venues across the country welcoming the production, adding stunning surroundings to the whole experience.

The Snowman Tour at Beverley Minster

The Snowman experience offers much more than a viewing of the beloved movie, itself made extra vivid by the presence of live musicians: a professional orchestra and a young soloist performing the famous Walking in the Air song. The programme also includes a second animation, specially commissioned by Carrot Productions. This year some venues will be treated to a world exclusive in the form of A Donkey’s Tale. This heart-warming story of Dillon the Donkey, an ordinary donkey with an extraordinary dream that takes him on a journey that will change his life, has been specially written and composed by Daniel Whibley.

Daniel Whibley is also responsible for the musical score for The Bear and the Piano, last year’s big hit commission, which will be touring to some venues again this year. This exclusive animated film based on the award-winning book by David Litchfield has a narration recorded by Joanna Lumley. It already looks set to become a family favourite for the next generation.

Other key elements which make these Carrot Productions events so popular with parents include:
• The orchestra drawn from some of the top musicians in the country, many of whom are members of such orchestras as The Hallé and the BBC Philharmonic
• Every performance features a young soloist local to the area singing the haunting Walking in the Air solo which lies at the heart of the Snowman. Auditions are held in the Autumn, with local Music Hubs and Cathedral Choirmasters helping to find suitable soloists to take up this superb performance opportunity.
• A rousing Christmas overture
• A fun introduction to the orchestra
• A visit from the organisation’s very own snowman!

Click here for other Christmas events happening in Yorkshire.