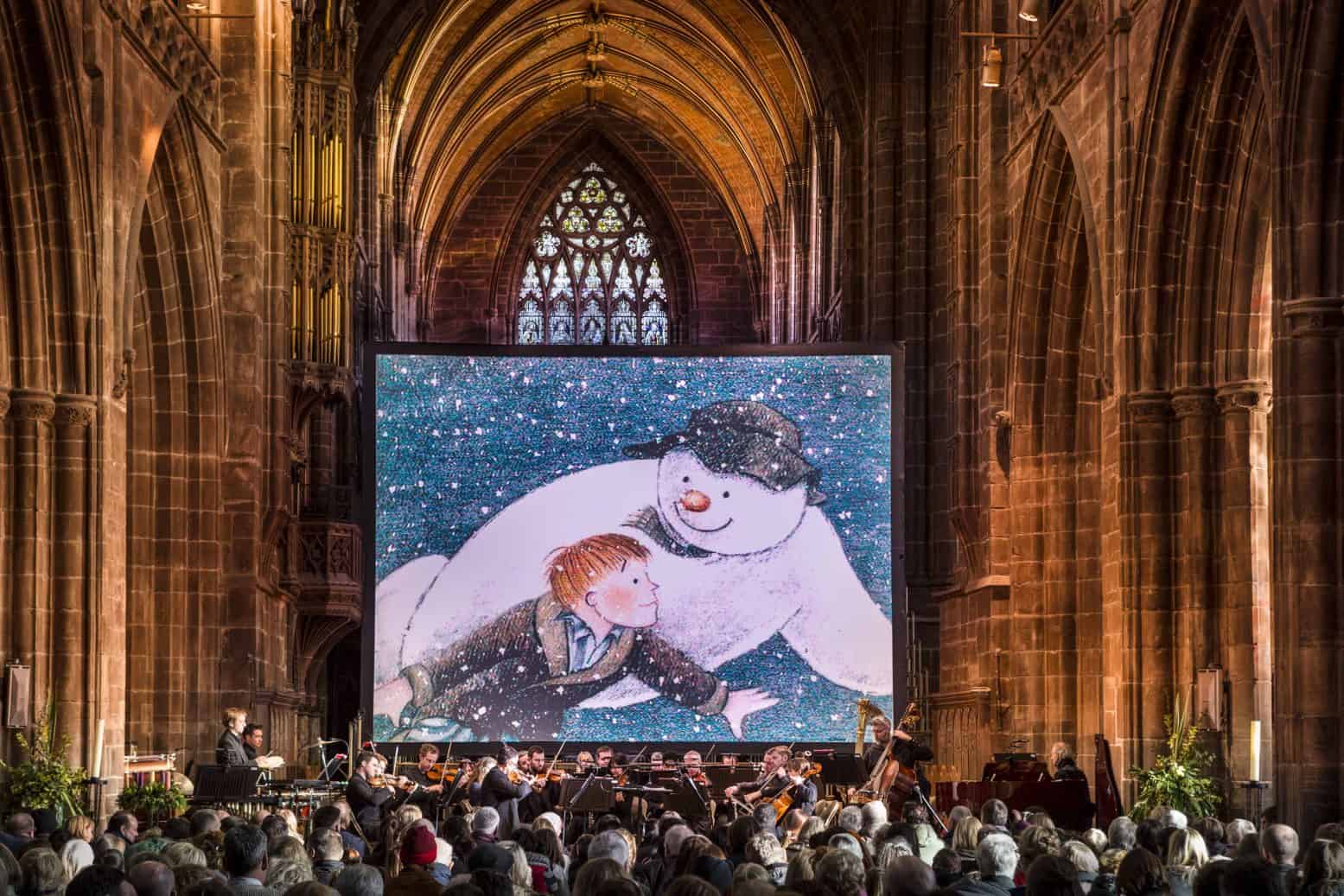 We watched The Snowman Tour in York Minster and it was just magical!  The Minster is such a majestic building, it really is a privilege to watch such a lovely Christmassy film there (and yes, I cried at the end!).  It would have been lovely to just sit there and listen to the orchestra, but the film gave it an extra dimension (and I think without the film, the children wouldn’t have been so entertained).  The orchestra began and played some festive (and funny!) pieces.  They also played The Nutcracker alongside an animated film.  My favourite part – other than The Snowman itself – was when they played ‘Do you wanna build a Snowman?’.  Miss H and I are massive Frozen fans so we loved this!

We had seats almost at the front and had great views of the screen and the orchestra.  I am not sure how well those at the back saw.  I think if they raised the screens a little higher next year that would help matters.  (or just make sure you get in early and get seats near the front!).

My advice for next year, if you are planning to eat out either before or after is to book your table at the same time as your tickets and then you are set – restaurants get very busy so near to Christmas and we couldn’t get a table.  (Completely my own fault).  It was a bright day though, so we bought some chips from Petergate Fisheries and carried them into the gardens behind the Minster.  It was a lovely quiet spot away from the crowds!

The Snowman York Minster.  Now, this is something special!  For the first time there is going to be a screening of The Snowman in York Minster with a full orchestra accompanying.  I just think this will be magnificent! There are two performances on the 16th of December 2017.  The matinee begins at 2.30pm, and the evening performance at 7.00pm.

Click here to book tickets for The Snowman in York Minster Matinee.

Click here to book tickets for The Snowman in York Minster Evening Performance.

Delight your family this Christmas with a screening of two enchanting films accompanied by live orchestra.  Following on from their highly acclaimed sell-out tour last December, Carrot Productions are bringing their Snowman magic to York Minster.

Hear some of the UKs top musicians perform Howard Blake’s beautiful soundtrack – including the evocative ‘Walking in the Air’ sung by a local child soloist – in perfect synchronicity with the film shown on a giant screen. Not a dry eye in the house!

This extra special performance includes a light-hearted Guide to the Orchestra, including an angelic harp, Frozen on the flutes, and a very naughty drummer!

You’ll also experience the wonder of that most Christmassy of seasonal pieces, The Nutcracker, brought to life by Tom Scott’s mesmerising animated film. Along with a toe-tapping Christmas overture – and a visit from a VERY special conductor! – this festive treat has something for all ages. Cherished by children and adults alike, the concert is fast becoming an annual custom, providing the perfect winter outing for all the family.

With many venues predicted to sell out long before December, buy your tickets soon to avoid disappointment.

Suitable for all ages from 3+

As featured in The Guardian, Sunday Times and The Telegraph ‘Top things to do at Christmas’

Looking for other Christmas events in Yorkshire?

Author: Nikki
Filed Under: Christmas Events, Days Out in Yorkshire

Nativity! The Musical at the Leeds Grand Theatre
Thackray Medical Museum, Leeds – Become a Surgeon this Half Term